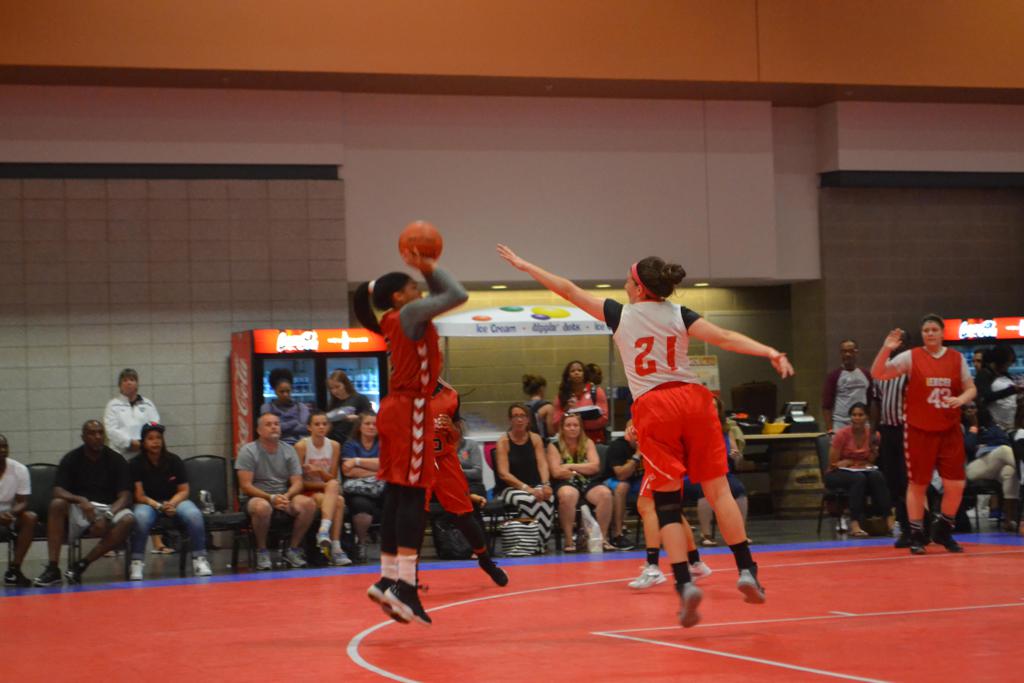 Nashville, Tennessee – The 3rd Annual Apache Memorial Classic, hosted by John McGraw, featured many of the country’s top teams and programs in a showcase format that accommodated over 250 plus college coaches watching future prospects battle it out in the Music City Center. This was a great event as many of the matchups were truly exciting and kept the fans on their feet all day long.

Jordan Nixon 2018 5’8” Point Guard   IExcel (NJ)
Nixon was a game changer in both of the IExcel victories on Saturday. She went for 20 plus points in a showdown with Rivals (MA). Nixon was tough to stop off the dribble and was fantastic from the perimeter as she made several one dribble pull-up jumpers when she was being closely guarded. Many BCS head coaches were in attendance to watch the talented Nixon and I would guess that they didn’t walk away disappointed.

Daphne White 2018 6’4” Post Mississippi Phenom (MS)
Daphne showed a soft touch around the rim and finished inside when she got the ball. White displayed very good shot blocking ability as she timed them just right; keeping her out of foul trouble. She’s very mobile for her size and is comfortable leaving the paint to defend on the perimeter. She has some room for improvement but has great potential to be one the most dominant post presences in the state of Mississippi.

Aliyah Boston 2019 6’2” Post IExcel (NJ)
Boston was dominant on both ends of the floor from start to finish. She has soft hands and is a very athletic big who got down the floor for easy layups, finishing at a high rate even through contact. When she wasn’t dominating in the paint, Boston showed that she could step out and make the 15’ jumper. She rebounded the ball well and blocked or altered several shots that had defenders thinking twice when they got the ball in the paint.

Angel Burgos 5’3” 2019 Point Guard BWSL Richmond 2019 Black (VA)
She may be small, but she has major game. Burgos was very crafty with the ball in her hands, not wasting any dribbles as she delivered the ball exactly where it needed to be. When she wasn’t getting teammates involved, Angel was nailing long perimeter jumpers or floaters in the lane. She hustled and was very vocal on the floor. She was definitely one of the top point guards that I saw.

Anyssa Jones 5’10” 2020 Point Guard Ohio Lady Hoopsters (OH)
If you’re looking for a young kid that knows how to play the game then Jones is it. The lefty guard made creating off the dribble look very easy as she blew by numerous defenders whether it was in the half-court or in transition. Jones displayed her passing skills where she threw some pin point passes to moving targets for easy scoring opportunities.

Makiala Ziegler 5’11” 2020 Wing Guard 1 Nation (MI)
Ziegler didn’t do much scoring, but showed she has the potential to be a good scorer in due time. She’s got good enough handles that she can create her own shot off the dribble at this early stage of her career. Defensively she made several steals and deflections by playing the passing lanes, and uses her strong build to rebound the ball. She will be a name from the state of Michigan.  If you don’t know her by now, you will in just a matter of time.

Ashlyn Watkins 6’2” Post 2022 South Carolina 76ERS Cubs (SC)
Watkins was a menace on the defensive end of the floor. This young lady had double digits blocks and rebounds in both games that I saw her play on Saturday. She runs the floor like a guard, has good hands, and body control and can play with her back to the basket. Ashlyn will be household name in SEC country in a few years.