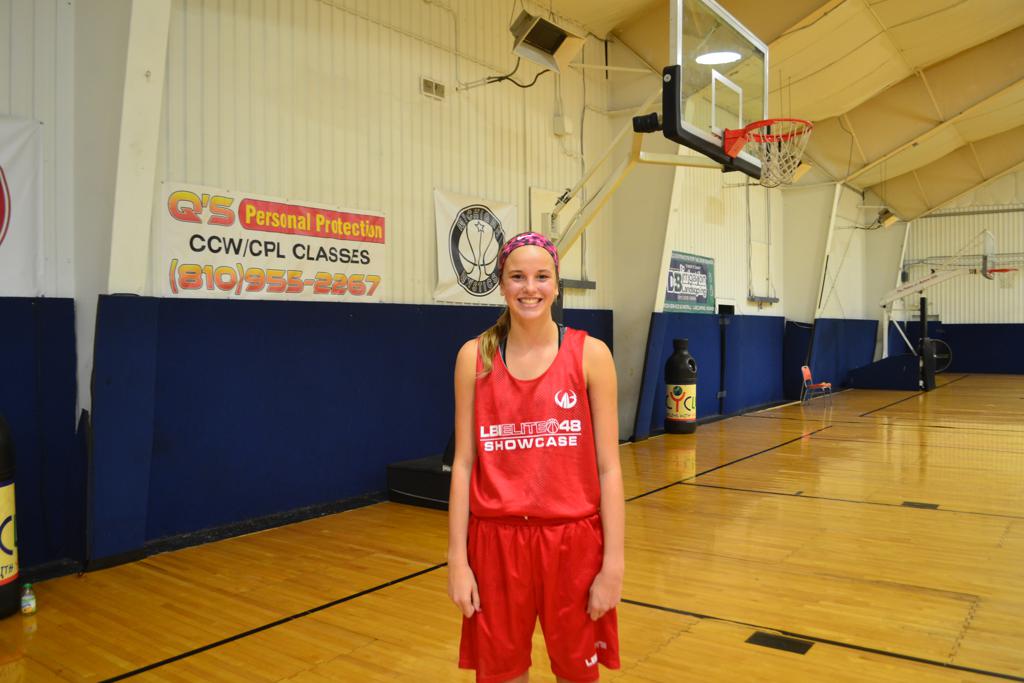 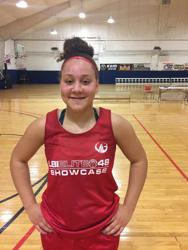 Jalynn Brumfield '18 is a talented player from Traverse City

Flint, MI – The second annual LBI Elite 48 Camp, held at Hill Road Hoops, kicked off Saturday at 10:30am and was truly a showcase of some very talented Michigan players. 50 Lady Ballers from all over the state hit the court with LBI staff and coaches from multiple arenas to display their skills and overall game. Players from the classes of 2017-2020 were represented at the camp. It is said that starting with the class 0f 2017and for at least the next 4 years, selecting a Miss Basketball for the state is going to very challenging. After watching these young ladies battle each other, that notion still stands. These classes are loaded in every position, with elite talent in each corner of the state. Some see it as a problem, but for a true lover of basketball, it’s a wonderful problem to have!

Lasha Petree   6’   Wing   Salem HS
Lasha has a very long frame that she uses to her advantage. She runs the floor extremely well and has great court awareness. She is effective on both ends of court, can rebound well and block shots. She can handle the ball and lead the fast break.

Kaela Webb   5’5”   PG   Detroit Country Day
Webb is a very talented true point guard. She does a good job of deciding when to pass and when to score. She uses her speed as a defensive weapon. She has great court vision and can find the open man.

Ashley Primas   6’  Post   Detroit Cass Technical HS
Primas is a post player with long limbs and a huge upside. She’s able to run the court well, be a strong defensive presence and battle inside for rebounds. She knows the game very well and as long as she keeps working, she will be a force to watch out for.

Maxine Moore   5’10”   Post   Detroit Country Day
Moore was a strong defense present and no one was able to match her strength. Once she was planted, she had her way with her defender. She did a good job running the court and making herself available. She has pretty good footwork and can take her defender off the dribble.

Jalea Richardson   5'11”   Wing/Post   Saginaw Heritage HS
Richardson has size, length and is a great athlete with a solid skill set.  More of a face up forward man than a perimeter player at this point, she showed the ability to make mid-range jumpers and finished her moves off the dribbles during the drill session. The up and down pace of games usually takes players a game or two to absorb, but Richardson was at her best in that style of play which is why she's one of the top players in the state of Michigan 2018 class.

Jalynn Brumfield   5’9”   Wing   Traverse City Central HS
Jalynn is a solid wing player with a strong wide frame that can play inside and outside, making her a double threat. She can shoot from long range and played solid defense.

Jala Petree   5’9”   Guard   Salem HS
Petree is a long shooter, with the ability to keep the ball high and shoot over her defender. She did a great job moving without the ball to allow herself to get open and get her shot off. She can handle the ball in traffic and has great court vision. Jala was active on the defensive end, deflecting passes and playing strong help defense.

Camree’ Clegg    5’5”   PG   Wayne Memorial HS
A point guard with a solid frame, Clegg did an excellent job of protecting the ball and not turning it over. She has a high game IQ and was able to find the open man. She plays solid defense and was a vocal leader

Erica Whitley-Jackson   5’9”   Wing   Detroit King
Erica showed that she is able to handle the ball in traffic, while leading a fast break. She is capable of finding an open teammate or finishing the break herself. She has long arms that she uses to her advantage when guarding a player that may be quicker than her. She can also shoot from long range.

Jordyn Wigg   5’6”   Guard   Hastings HS
Jordyn was able to effectively play the point guard and off guard. She runs the floor well, with and without the ball. She has a pretty good game IQ, which really makes her productive in both guard positions. Wigg is a solid shooter, consistently hitting shots from mid and long range.

Madison Barrie   5’10”   Wing   Midland HS
A wing player that runs the court, Barrie is able to move without the ball and get open. She is a solid shooter and able to play good defense. She can handle the ball without tones of turnovers.

Jessica Bicknell 5'8" Guard Saginaw Heritage HS
One of the best pure shooters that we watched on Saturday, Bicknell is a talented three-point shooter that knocked down three triples in our viewing of her on Saturday afternoon.

Alexis Miller 5'6" PG Howell HS
Aggressive point guard who can scored off pull up jumpers from the perimeter and mid-range, was good at getting to the basket and finishing with athleticism. She sat down as a defender, who constantly got after it on either end of the court. 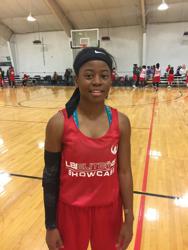 Jasmine Powell   5’5”   PG   Detroit Country Day
Powell was by far the most consistent and high performing player at the camp. She was very aggressive, but also very smart on both ends of the court. A natural point guard, she possesses the ability to play the off guard and be just as productive. She has quick hands and feet which make her a huge problem on defense. Jasmine makes smart passes, but knows when to attack and finish at the rim.

Alyza Winston   5’7”   Guard   Mona Shores HS
Winston is an extremely talented player. She has the ability to take over a game and put a high number of points in the book. She finds a way to get to the basket and draw multiple defenders. She doesn’t mind getting in the paint and taking some contact. Alyza did a great job handling the ball in traffic.

Laya Hartman   5’10”   Wing   Okemos HS
A long framed wing that can run the floor like a point guard, Hartman showed that she can handle the ball well and get to the paint at will. She can play through contact and does a good job utilizing her length on defense

Mahrianna Petree   5’9”   Guard   Salem HS
Petree is a strong ball handler that stood out during skill development drills. She has wonderful court awareness and always seemed to know where the basket was and where an open teammate was. Mahrianna has excellent footwork, which allows her to beat opponents off the dribble, but also play inside against smaller defenders.

Mauriya Barnes 5'5" PG Grand Rapids Catholic Central
Coaches were really impressed with her energy, defense and ability to score the basketball. While she may be another year away from really getting on the map because of Grand Rapids Catholic Central upperclassmen depth in the backcourt, she jumped all over LBI map this past weekend. Barnes definitely has the ability to play on the next level.

Rickea Jackson   6’1”   Wing/Post   Detroit Edison Academy
Jackson is 6’1” but her long frame allows her to play like she’s 6’4”. She is quick for her size which enables her to guard the wing and the post. She has great ball control and is able to take opponents off the dribble. She did a good job running the floor during fast breaks and finishing at the rim.

Deljanae Williams   5’8”   Guard   Detroit King HS
Williams showed great body control during fast paced games and when attacking the basket. She is a strong defender that uses her length to take the ball from her opponents with ease. She has a slim frame, but she battles with the best and biggest of them. Deljanae also has the ability to shoot the long three.

Jakarri Alven   5’9”   Wing   Grand Rapids Catholic Central
Alven’s performance was consistent throughout the entire camp. She can handle the ball well for her long frame and has long strides that allow her to get past opponents and to the basket. She has huge potential and if she keeps working, will be one of the top players of this class.

Alexis Johnson   5’11”   Post   Southfield HS
Johnson has a strong solid build, but is much quicker than you would expect. Unlike the average post player, Alexis is much more effective off the dribble and facing the basket. She finishes strong around the rim, even with contact. She is a strong rebounder also.

Eden Johnson   6’1”   Post   Ann Arbor Skyline HS
Johnson is a very strong athletic player with a nice frame. She did a good job establishing position in the post and getting the ball in the basket. She was a defensive presence, altering shots and grabbing rebounds. Eden has a huge upside and has the potential to be a very dominate player.

Diynasti Dowell   5’10”   Post   Muskegon HS
Dowell is a raw athletic talent that was a strong presence on both ends of the court. She has strong hand coordination, which allows her to catch the ball in the post and hold onto it; even if she receives contact. She worked hard for rebounds and often was able to get offensive rebounds and put backs. Diynasti used her solid frame to clog up the paint on defense and alter shots.

Taylor Bronaugh   5’5”   Guard   Ann Arbor Skyline HS
Taylor is a quick, solid shooter that did a good job moving without the ball to get open. She was really good at seeing the entire court and getting her teammates the ball. Taylor played solid man to man and help defense.

Whitney Sollom    6'1"   Wing   Hartland MS (Hartland, MI)
Wiry and a good athlete, Sollom was solid in the open court during games.  She showed superb form on her jumper with a high release and no delay with positive results in drills. Sollom has decent ball handles and has the ability to play either the small forward or shooting guard

Daija Tyson   5’5”   PG   Detroit Public Safety (Detroit, MI)
You would not have known Tyson was still in middle school just by watching her play. She is very quick, and used her speed to on defense to be a pest to whomever she was guarding. She has great court vision and often was able to make great passes to her teammates. You always knew when she was on the court, and when she wasn’t.

Chenelle King   5’4”    PG    Carman Ainsworth Middle School (Flint, MI)
King is small in size but packs a powerful punch. She handles the ball very well and is able to get to the basket when she wants. She has a quick first step and it’s hard for defenders to stay in front of her. Although almost every person in the camp was bigger than her, she was willing to guard anyone.

Lauren Reed   5’5”   Guard   White Pines Middle School (Saginaw, MI)
Lauren has a very high game IQ for her age. She runs the court well, plays hustle defense, and does all she can to help her team. She was able to play through any mistakes and continue to play good basketball.

Jasmine Clerkley 5'11" Post Chippewa Middle School (Okemos, MI)
Physical young post player, that has a huge upside. Clerkley moves well and has the length to defend away from the basket. She showed that she can hit the mid-range jumper with some consistency in drills but, may need another year of work before that’s a go to option.

This story was written by LBI Senior Writer R.Simone she can reached via email rsimone@lbiscouting.com also follow her on twitter @LBI_RSimone