There were many standouts at the Midwest showdown this past weekend 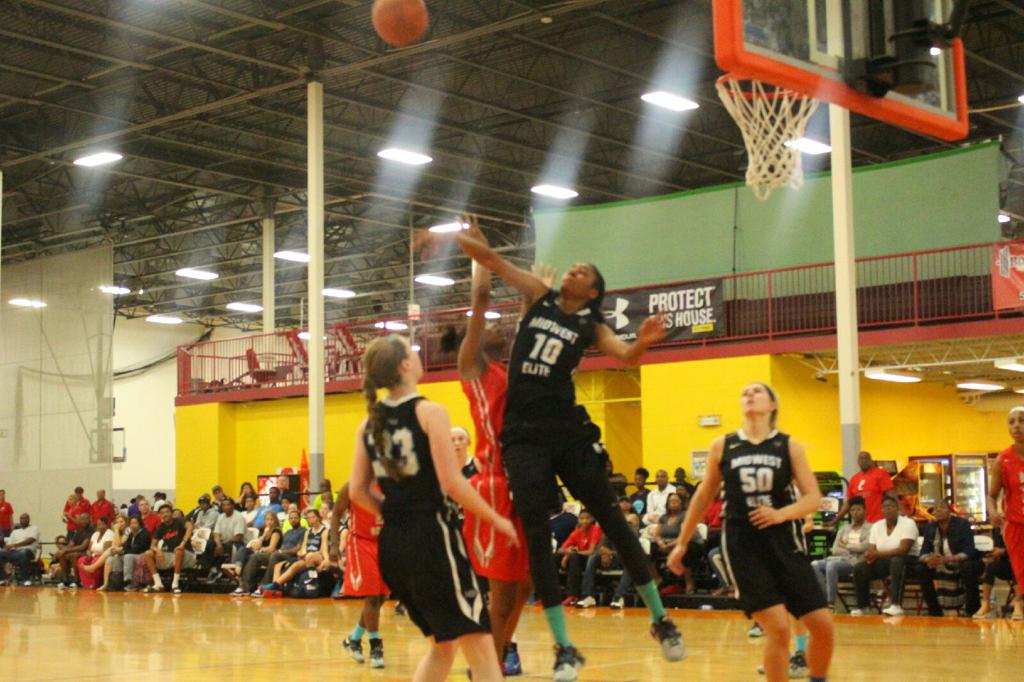 Sydney Cooks was dominate this weekend at the Midwest Showdown

Maori Davenport  2019  6’2”  Post  All Alabama
This player is going to be really good in the near future. Davenport is very athletic, can run the floor like a guard, she finishes in traffic and caught every pass that was in her area. Her major strength right now is on the defensive end where she blocks numerous shots and rebounded well. She is also quick enough to defend on the perimeter.

Rickea Jackson  2019  6’  Wing  Michigan Crossover
Jackson pumped in a game high 23 points in a matchup against Illinois Lady Lighting.  She did a little bit of everything on the court as she can score off the dribble, shot the short jumper and got plenty of transition points by using her length and ball handling skills to get layups. As she continues to improve her overall skills, this 2019 kid will be phenomenal.

Chanel Wilson  2018  5’6”  PG  FBC MO
Wilson is a scoring point guard that also has great vision in the open floor. She was very quick with the ball in her hands. She was able to get past her defender and knocked down the pull up jumper and when her defender played off of her she drained a couple of triples. She was effective off the screen and roll where she fed her post players some nice passes for easy buckets.

Gabi Legister 2019 6'2 Post Western PA Bruins
Leister was solid around the basket as she scored using powerful drop steps as she sealed her defender to get good low position on the low block. She also rebounded well when it was in her area where she threw some very good outlet passes that led to easy transition points.

Tayonna Robertson  2019  5’11”  Wing  Western PA Bruins
Another good kid coming from the Bruins program. Robertson is a very athletic wing that was good in the open floor as she made some great decisions with the ball her hands. She made a couple of nice mid range jumpers as she got lift on her shot to shoot over her defender.

Sasha Thomas  2018  5'5" Guard   Michigan Crossover 15U
Thomas is a feisty guard that doesn't mind being aggressive when her team needs it. She can stay in front of her man and is quick enough to play the lane and interrupt passes. She does well in transition and can find the open spot on the floor to get off her sweet jump shot.

Trinity Morris  2018  5’4"  PG  All Ohio Xpress
Morris did it from all over the floor for All Ohio. She did a great job facilitating the offense and creating opportunities for herself and her teammates.  The defensive pressure did not have an effect on her and she was effective finishing through contact against the bigs.

Zaria Wright  2017  5’8"  Guard  SC 76ers Black
Wright played a major role in leading the 76ers to the elite division gold bracket championship. She showed her ability to run the team from the point and also step up and hit big shots when her team needed it. In the semi finals  versus Illinois Lady Lightning Platinum Wright was 4-7 from behind the arc and finished with a game high 20 points.

Sydney Cooks  2017 6’4"  Post  Midwest Elite Platinum
Cooks was one of the most dominant post players all weekend long. Her length along with her athleticism caused major problems for opponents. She has a very effective drop step that goes along with good passing ability out of the post. On the defensive end she is a natural shot blocker that altered many shots and she did a great job rebounding on both ends of the floor.

Nia Ahart  2017  5’7"   PG  All Ohio Black
Ahart plays the point like it is supposed to be played. She is not easily rattled and seems to always make the right decision. Weather it was a pull up jump shot, a post entry or a nice dime in transition, it was all natural and efficient. She did a great job leading a short-handed All Ohio Black team (2 players were at USA trials) to the semis of the Elite division.

Story was written by LBI Michigan & LBI Carolina Scouting Directors Jason Wilkins & Percy Wright you can reach them via email jwilkins428@lbiscouting and pwright@lbiscouting.com also follow them on twitter @lbinsider @lbinsider_nc