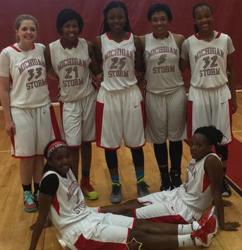 Lansing, MI -  The sports gear company that the state of Michigan wears often and has grown to love hosted their annual Moneyball Shooutout tournament on Saturday, May 9, 2015.  The event showcased some new and upcoming talent in the state that were impressive and very fun to watch. Congratulations is order to the Michigan Storm for winning the 12u, 13u and 14u divisions.

Michigan Storm 13U (2019)  team was by far the most impressive team in the tournament. Low in numbers but huge in heart; this young athletic team not only found a way to win but a way to dominate with only 5 players. Zada Lacy was a great floor general that can handle the ball very well under pressure and score at will. Madison Stevenson was a shooting assassin, literally knocking down jump shots from every where on the court. Taylor Collier was the strong body in the middle. She was able to post up with her back to the basket and face the rim to score. She spent a lot of time at the free throw line to finish three point plays. Xeriya Tartt is the only 2020 of the group, but plays well beyond her years. The defensive force, she rebounded, played the lanes, and altered shots while also being aggressive on the offensive end. Destiny Strother is the well rounded, even kill of the squad. Whatever they needed her to do is what was done. She can shoot the three, is very active on defense and finds her open teammate. This team truly earned the title "Champions" today.

Keiah Dancy  2018  5’10”   Forward  Michigan Storm 15U
With only five players on her team, Dancy  stepped up big in the semi final game. She crashed the boards hard on both ends of the court and fought to gain position. She worked really well on the weak side of the floor, utilizing the pick and roll to her advantage. Three straight trips to the free throw line where Dancy was 4-6, gave her team the edge needed to secure the victory.

Tia Tedford  2017  5' 7"  Guard  Michigan Stars
Tedford is a skilled guard with natural athleticism that was exciting to watch. She can handle the ball under pressure, play full court man to man defense effectively, and finish around the rim with contact. To add injury to insult, she can shoot the long range shot and shoot it well. Look for her to stir up some trouble this summer.

Chenelle King  2020  5’ 4" Guard   Michigan Storm 12U
Tough as nails, King was a ball of energy for her squad. Relentless on both ends of the court, she always found a way to get her team the ball on defense and a way to score on offense. She is small in size, but fearless and will get in the lane to draw contact every chance she gets.

Brittany  Hill  2016 5’8"  Guard  Michigan Stars
Hill has a long athletic frame and uses it to create space for herself to get her shot up.  She was able to pull up off the dribble and also create opportunities for her teammates. During critical moments of the game, she kept her composure and knocked down two huge threes to give her team a fighting chance.

Edecia Beck  2018   6’0"  Post  West Michigan Drive 15U
Consistency is the first word that comes to mind when speaking of Beck. In both games that we observed her play, she rebounded, posted up or drove to the basket and played great defense. She uses her size to her advantage in the post, but she is not afraid to put the ball on the floor to lead a break and will not hesitate to guard a player on the wing.

Story was written by LBI President R.Simone you can reach her via email rsimone@lbiscouting.com also follow her on twitter @LBI_R.Simone