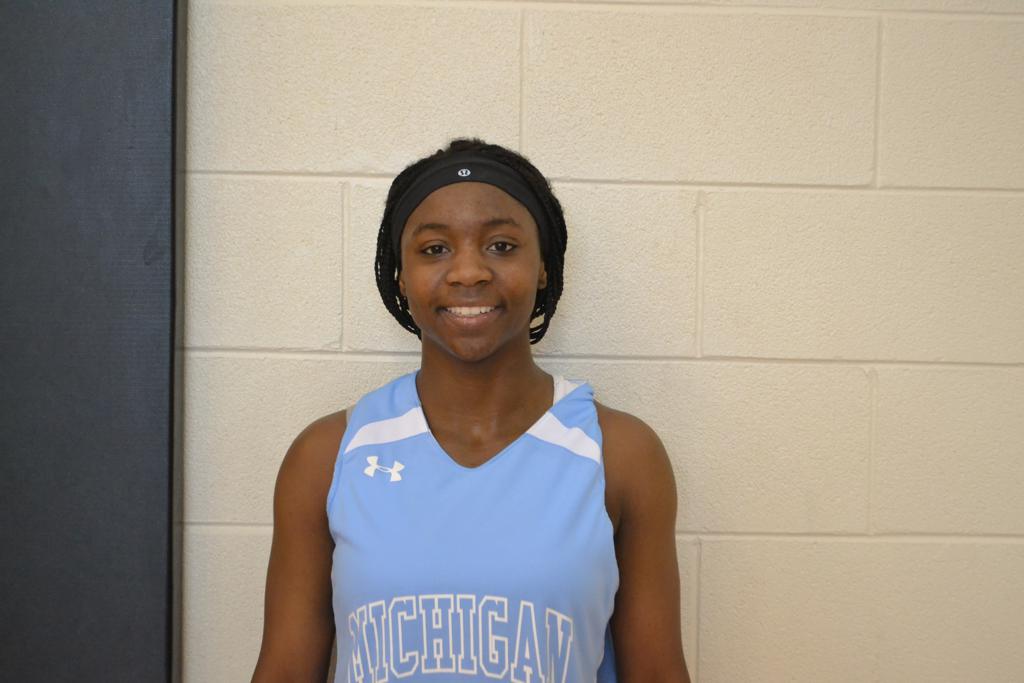 Ypsilanti, MI – Today’s games were overflowing with talent, intensity, and great basketball. Our LBI staff was put to the test keeping up with not only running the tournament, but also highlighting the superstars of the day.  With teams traveling from Michigan, the Midwest and East Coast, we definitely got what we were asking for.

Taiye Bello  2016  6’2”  Post  Michigan Storm-Love
Bello let her presence be felt under the basket today by being the strongest rebounder in the gym and altering every shot in her path. She also forced defenders to either move out of her way or send her to the free throw line. She helped her team finish 1-1.

Katelyn Brownlee  2017  5’6”  Guard  Michigan Sting
Brownlee did a great job being the floor leader for her team and keeping everyone involved. She was either directly or indirectly responsible for a nice portion of her team’s points. She also was very aggressive offensively getting to the paint with ease, shooting the three well, and knocking down the pull up jumper.

Breanna Perry  2017  6’0”  Forward  Michigan Crossover EYBL
True athlete in every sense of the word; runs the court, jumps out of the gym, not afraid to dive on the floor, and very coachable. Perry did a great job helping teammates to get open and battling for rebounds. She was very impressive on both ends of the court.

Chloe Idiomi  2019  5’10”   Post  Michigan Mystics
Idiomi was impressive as she played well with her back to the basket and had great footwork. She rebounded, block shots, and played solid defense. She was able to knock down some outside shots when her team needed them.

Sidney Singal  2016  5’ 7”  PG  Top Ten
A ball player that is true to her game, Singal used her long athletic body to create and knock down shots. She does a good job pushing the ball up the court and forcing the defense to think and react quickly.

Maddie Maloney 2018  5’8”  Guard  CCE Express
Maloney was active on both ends of the floor throughout the day. She knocked down clutch three pointers to push a great game to overtime. She has a high motor and does the little things that make a big difference.

Cheah Rael-Whitsitt  2016  6’0”  Forward  Top Ten
Cheah did an amazing job finishing strong around the rim. She has great hands that allowed her to catch difficult passes and also squeeze the ball and keep defenders from swiping the ball away. Her guards were able to utilize her off the pick and roll due to her ability to execute it well.

Kennedy Aziubike  2017  5’7”  Guard  All Ohio 15U
A strong ball handler, Aziubike did a great job creating her own shot and finishing with contact. Needless to say she spent a lot of time at the free throw line where she was also able to execute. She displayed her range today, knocking down multiple jumpers and three pointers.

Kierston Bell  2019  6’1”  Forward  Lebron James Lady Stars
Bell once again impressed our staff with her all around outstanding game. This 6’1” player was able to do everything from block shots to leading the break in transition. She can score from anywhere on the court and has remarkable court vision to get the ball to the open man if her shot isn’t there.

Bexley Wallace  2018  6’3”  Post  All Ohio-Black
Very strong inside play, Wallace used her size to box-out opponents and get multiple rebounds. No matter who bumped or swung at her, she found a way to finish around the rim or get the offensive rebound. She is a very versatile player.

Kendall Miller  2018  5’8”  Guard  Lebron James Lady Stars
Miller’s ability to attack the rim at will is something that gave defenders trouble all day. She is a strong athlete that can play multiple positions and also handle the ball under pressure. Her mid range shooting is very solid.

Maddie Brown  2018  5’ 5”  PG  Toledo Thunder
Brown was deadly from the perimeter and one of the best shooters that we saw today. She played under control getting her teammates involved and showing the ability to create her own shot when needed.

Paulina Castro  2016  5’7”  Guard  Mac Irvin Fire Godfather
A shooting specialist, Castro did a wonderful job knocking down big shots while in high-pressure situations. She did not force her shots, but instead worked hard to create them, or did a good job coming hard off screens to ensure she was open.

Leah Sims  2017  5’3”  PG  Illinois Xcitement
Sims showed us today that she’s been in the gym working. Not only has her ball handling improved; but her shot range has grown as well. Small in size, Leah knocked down some long range threes that were close to professional range. She also did a great job settling her team down and running their offense.

Cachet Johnson  2016  5’8”  Guard  MacIrvin Fire
A guard that plays like a post player is a great way to describe Johnson. She uses her size and strength advantage over other guards to bully her way in the paint and finish on her drive. She also uses her size advantage on the defensive end, altering shots and taking charges without hesitation.

Cymone Goodrich  2017  5’9”  Guard  Illinois Xcitement
Goodrich has great floor vision and she uses this skill to do whatever her team needs her to do. She has the ability to penetrate and score or be a floor general and lead her team. Very impressed with her composure during game play.

Daniel Williams  2017  6’0”  Post   Mac Irvin Fire
Johnson was a dominant post player that made her presence felt on both ends of the court. She is very athletic with great post moves and the ability to finish with contact. She plays very aggressive on defense and does not back down from any opponent.

Amaya Hamilton  2019   6’1”   Forward   Indiana Gym Rats-Gold
Hamilton was fun to watch. She is a versatile player that is on her way to becoming a big time prospect. She rebounds well and is not afraid to step out of the paint on offense or defense. She even knocked down three big time three pointers and did not hesitate to shoot them.

Jenna Allen  2019  6’0”  Forward  Indiana Gym Rats-Gold
Allen showed us today that she is a big wing player that can truly be a threat inside or outside.  She uses her versatility and her high IQ to create opportunities for not only herself but her teammates as well.