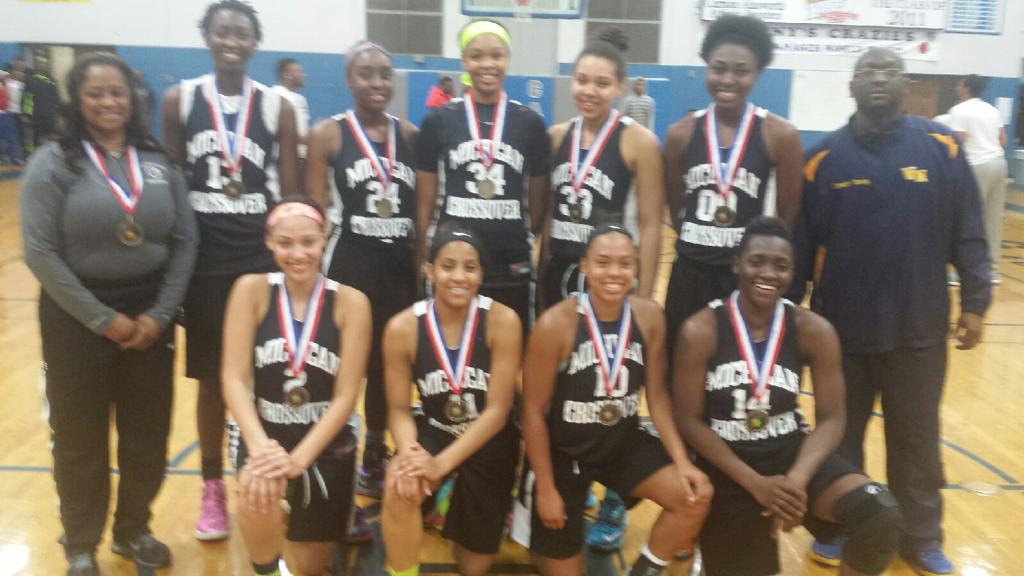 The 2015 travel season is already three weeks in and as many teams are preparing to hit the road this weekend to various NCAA Certified events, LBI will also  be hitting the road to check out the state’s top prospects and travel teams.  Before doing so, we would like to you introduce the 1st LBI Travel Team Power Poll Rankings.

**When deciding which teams to rank in each spots, we factored strength of schedule, head to head matchups and bad losses. LBI Power Poll will be updated each month.**

1. Michigan Crossover EYBL
The Crossover did not start off as the state’s best team, as they took an early season loss to Michigan’s Finest at the Spartan Classic 3 weeks ago, but what a difference a couple weeks make. The Crossover showed what they could do this past weekend by breezing through every opponent at the Michigan Mystics Invitational by an average of 25 points to take home the title. They are loaded with scores and athletes led by nationally ranked Kysre Gondrezick, sharpshooters Destiny Pitts and Mikaela Kelly, quick athletes like Siyeh Frazier and post players Keaja Peace and Breanne Perry.

2. Michigan Shock - Williams
This Shock team is very solid across the board. After losing to the Michigan Crossover EYBL a few weeks ago by 3 points and a roster loss with Tylar Bennett going to All Ohio Black, many thought this squad was going to deflate. They instead went out and added two huge pieces to there front line in 6’2” Kaylee Wasco and 6’4” Bridget Hintz to go along with holdovers Samantha Thomas, Bailey Thomas, Antoinette Miller, and Keirra Fletcher. They also added a shot maker in Ellie Taylor. This is the only team in the state right now that can challenge the Crossover for the top spot and we can’t wait for the rematch!

3. Michigan Finest - Rob
This is the only team that has beaten the Michigan Crossover EYBL squad and even though the Finest lost in the rematch this past weekend, they showed that they are still a good team. They have one of the best juniors in the state in Mardrekia Cook that is surrounded by a variety of good players in Taylor Olson, Claire Glowiak, Morgan Villemure and Krystal Rice. They are very well coached and can really shoot the ball from all 5 positions on the floor. This is a team that I would not want to play in a single game elimination tournament.

4. CCE Express - Doneth
The CCE Express may be young but they're ready. They won the Spartans Classic 10th grade division championship and loss in the semi-finals in the Open Division at the Michigan Mystics Invitational. They are a guard oriented team led by Maddie Maloney, Margot Woughter and one of the best young shooters in the state in Maddie Watters. This is a team that will be one of the state's best for years to come.

5. Michigan Storm - Love
The Storm have 3 losses on the year to the Michigan Crossover (twice) and the Michigan Shock, but this team is still one the best teams in the state. Led by Taiye Bello and Jalisha Terry  accompied with newcomers Kristen Nelson and Hailey Leidel, they have the talent to play with anyone. After losing some of the state's best 2015 players, the Storm find themselves rebuilding this season.  When they put it all together they will definitely move up on this list.