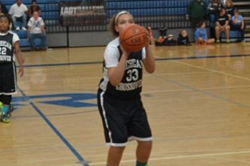 Lansing, MI - Some of the best teams & players in the state of Michigan competed this weekend at the Super Powers Classic held in Lansing, MI. This was the first travel tournament for high school age teams & they did not disappoint all the fans that were in attendance. If the first was this exciting this will be a very fun 2015 travel season.

All Ohio Xpress, coached by Kelly Peek, was on a roll this weekend. They defeated the Michigan Crossover, Illinois Lady Lightning and lastly Michigan Finest to win the Super Powers Classic Open Division Championship 45-44. This team is led by a trio of dynamic 2016 players; Arielle Varner in the post and guards Jailyn Mason and Alyssa Clay. These ladies play in your face defense and are an opponent’s nightmare, beating you from the perimeter or in the paint. I really enjoyed watching their games and college coaches should start following this team if they are not doing so already. The All Ohio Xpress has talent.

CCE Express (Doneth) is a young team that showed complete dominance the entire weekend. They won the 10th grade championship division by defeating Illinois Lady Lightning 47-30. They are led by a strong 2018 backcourt; guards Maddie Watters, Maddie Mahoney and Margot Woughter. Look for them to lead CCE Express to more success on the hardwood this summer.

As she did last weekend in the state semifinals game, Pitts lit up the scoreboard. She shot the ball very well from beyond the arc as she made defenders pay for not keeping a hand in her face. She was forced sometimes to handle the ball where she showed she has really improved. She made some good decisions in that position, finding her open teammates and also attacking the rim.

This kid from the Buckeye state brought her “A” game. She scored in every phase of the game. She shot it very well from 3-point land and showed a nice one dribble pull up that is automatic when she shoots it. She also has good vision and is a very good ball handler. Mason is able to make the simple play while running her team’s offensive sets.

Alisia was very active on defense as she altered and blocked a ton of a shot this weekend. She also showed her athleticism by rebounding outside of her area on both ends of the floor. She has really improved on the offensive end as well, scoring off the dribble from the high post and in the low post fighting off contact.

Watters was one of the best shooters of the entire tournament this weekend. She is a natural shooter that has a very quick release and beautiful form. Maddie also showed that she can put the ball on the floor to create space to get her shot off.

Tremendous on the block, Jarosinski could not be stopped once she obtained her position. She has good feet and hand coordination and uses them to post up hard and get deep position. Lindsey finished with either hand and has a soft touch on her jumper, knocking it down from 15

Story was written by Jason Wilkins you can reach him at jwilkins428@lbiscouting.com and  follow him on twitter @LBInsider