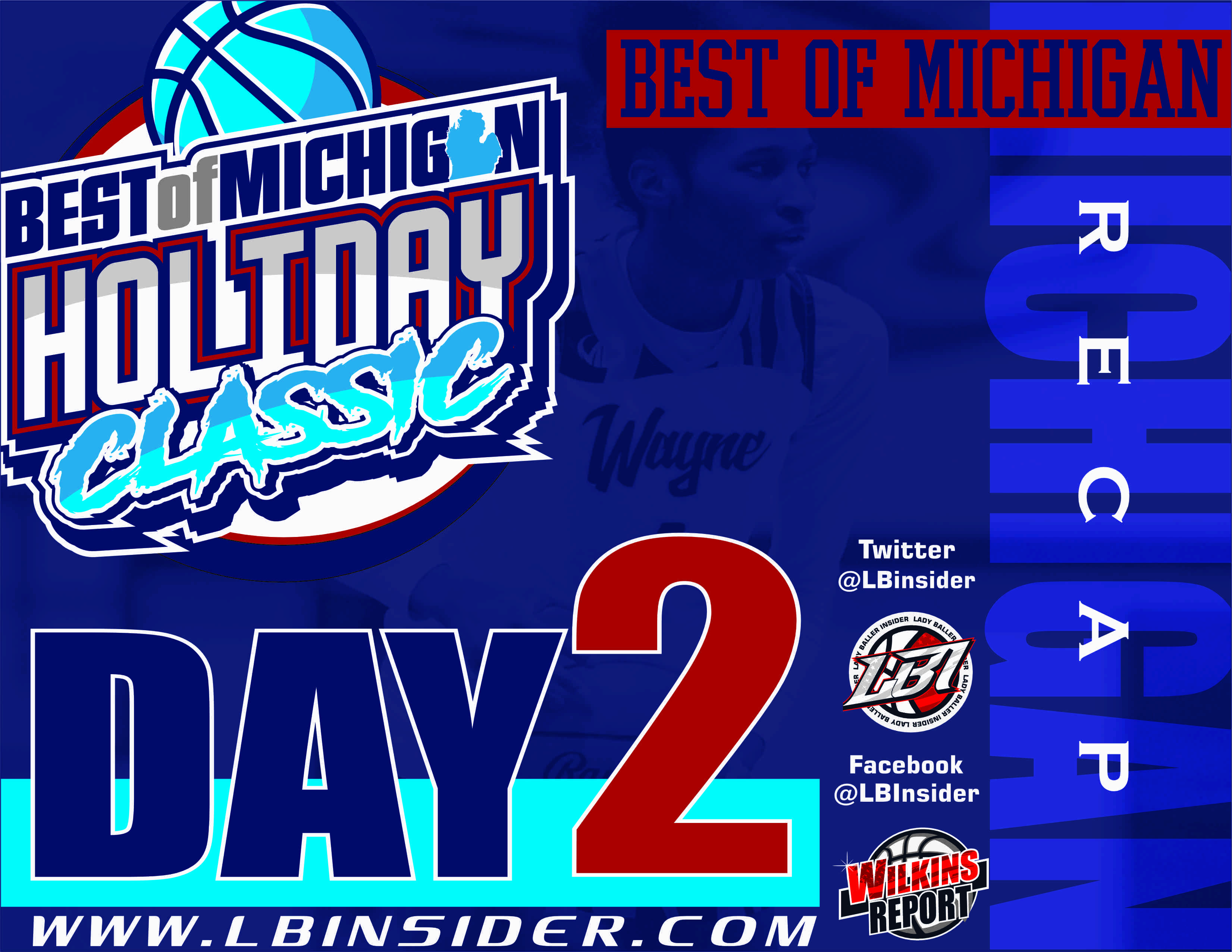 Belleville, MI – The biggest and best high school girl's basketball tournament once again did not disappoint. Some of the best teams in Michigan went toe to toe with some of our neighbors from Ohio, Illinois, and Indiana. As always, it was a basketball fan’s dream, with the sidelines lined with college coaches from every level to match. Congratulations to all the teams who competed this weekend, win or lose. You played your hearts out and did it with pride and class. Because of you, the Best of Michigan Holiday Classic continues to be an elite event. Salute to you all!

Charlotte Miller 2025 | Ann Arbor Gabriel Richard
With a lot of endurance and tenacity, Charlotte never stopped moving or playing hard. She put in the work on defense to help secure some big steals and finish in transition. She also lit up the perimeter, sinking three 3-point baskets. She never took a possession off, and it showed. She finished with a game-high 19 points.

Tambre Williams 2024 | Macomb Dakota
Tambre was a big presence in the middle. She moved well without the ball and battled inside for rebounds and position on the block. She used her stretch to deflect passes and block shots. Her grit and hustle were undeniable. She scored 8 points and ten rebounds.

Braxcynn Baker 2024 | Lowell
Braxcynn was simply Braxcynn. She’s tough and is always going to give you 100% each and every possession. She is confident in her game, and she trusts her teammates. Her IQ is just as impressive as her perimeter shot, and she knows how to make things happen. On defense, she gave just as much energy and effort.  She led her team to victory with a 26-point performance.

Dalton Deboer 2025 | Midland Dow
A strong floor leader with a lot of energy, Dalton tried to be a source of energy and resiliency for her squad. She did a good job at on the ball defense, trying to slow down potential transition points. She helped to control the flow of the offense and made good shot selections. She finished the game with 9 points.

Eliza Bush 2025 | Arbor Prep
Showing a lot of heart, Eliza played hard and consistently. When controlling the flow of her team’s offense, Eliza showed that she can make something happen when in a bind. She’s tough, and it showed most on the defensive end. She often got stuck with mitch-matches that were not in her favor, but she still played hard and never stopped being active. She had a team-high of 14 points, including four three-point shots.

Xamiya Walton 2024 | Butler Prep (IL)
Xamiya was the undeniable floor general and leader on her team. She is a thinker and did a great job making offensive adjustments, assessing the defense, and moving accordingly. She was able to take a lot of contact without getting frustrated and, most importantly, finishing the play. She scored a game-high 20 points.

Yahaira Bueno 2024 | Bolingbrook (IL)
Vocal with good court vision, Yahaira was best at advancing the ball in transition and finding her the open man in the halfcourt sets. She’s smart and patient, often explaining things to her teammates and sharing encouraging words. She was able to create shots for herself and played solid defense. She finished with a team-high 18 points.

Layla Marshall 2024 | Westfield Prep
Layla is a hard working player. She has a high motor and never slowed down. A scrappy and gutsy defender, Layla played with a lot of heart and did not shy away or back down from a challenge. She knocked down some big shots to help keep her squad in the game. She scored a team-high 18 points.

Skylar Jones 2023 | Whitney Young (Signed with Missouri)
Athletic and versatile, Skylar was not only the leader of her team, but she dominated the game. She grabbed rebounds and defended the rim, but also got some unbelieve baskets off the bounce, with and without contact. She has great timing; it showed with every shot she blocked or pass she intercepted. She finished a strong performance with a game-high 23 points.

Bailey Pickens 2024 | Detroit Edison
Bailey has a high motor, quick first step, and heart that allowed her to play twice her size and with no fear. Her quickness was also shown on the defensive end as she exhibited awesome on the ball defense and was a key factor in her team’s full court pressure. She’s crafty with the ball and good at drawing in the defense to create contact or quickly pass them for an easy bucket. She ended the game with 13 points.

Gabby Halliwill 2024 |  Lansing Catholic
If someone not at the tournament were to watch this game and see Gabby play this weekend, they would assume it was the championship game or maybe even a playoff game. That’s how hard she worked each possession. She’s scrappy on defense and feisty on offense. She hustled for loose balls and did a great job knocking down some tough shots. She finished with a team-high 16 points.

Mary Men 2023 | Midview (Signed with Bowling Green)
One of the best players in the tournament, definitely best in the front court, Mary put her team on her back and help lead them to a comeback win. She dominated on the boards on both ends of the court. Once she caught the ball anywhere around the rim, it was almost a guaranteed bucket. She ran the court in transition, has great court vision, and didn’t get tired. Her hard work earned her a game high 25 points and 12 rebounds.

Rashunda Jones 2023  | South Bend Washington (IN) (Signed with Purdue)
Rashunda was a little bit of everything for her team. Hands down one of the best defenders of the tournament, defending multiple positions and forcing turnover after turnover. Her speed and high IQ allowed her to maneuver through traffic with precision, finishing strong or getting the assist. Rashunda’s motor was always on the go, and her endurance was unmatched. She finished with a quiet but strong 29 points.

Summer Davis 2024 | West Bloomfield (Signed with Michigan State)
Summer has the ability to be an offensive threat in multiple ways, and she showed them all this weekend. She had nice footwork in the paint to finish strong at the rim. She rebounded and got second chance points. A huge defensive presence on her team, she created transition opportunities for herself and her teammates. Lastly, she can light up the perimeter, especially if her defender makes the mistake of dropping their hand. She scored a team-high 29 points in a very intense and fast-paced game.

Daria Shelby 2024 | Bellville
With a long stretch and special attention to detail, Daria was a quiet storm for her Belleville squad. She used her length to play the lanes and offered some top notch help defense, deflecting passes and creating turnovers. On offense, she was patient and deliberate. She knocked down some big shots and free throws in the clutch and helped her team dig out of a hole for the win. She finished with 17 points, a game-high.

Jaidyn Elam 2024 | Detroit Country Day
Jaidyn is a hustle player with a high IQ and a lot of heart. She did it all. She grabbed rebounds. She was active and tough on defense. She created shots for herself and her team. The most important thing, she never stopped playing. She showed up every possession and did what she could to help her team until the last buzzer sounded. She finished with a team-high 16 points.

Anaya Hardy 2024 | Detroit Renaissance
Anaya stepped up big for her team with a soft touch and a long reach. She ran the court in transition and made herself available. She did a good job of moving without the ball in the halfcourt set, planting her feet to be fed the ball or boxing out for a rebound. Her reach is long, which helped her block quite a few shots. She scored a game-high 20 points and 11 rebounds. College coaches should be putting this kid on your radar.

Mayla Ham 2023 | Wayne Memorial (Signed with Georgetown)
Mayla’s ability to read her defender and adjust her speed was remarkable. She’s athletic with a long and quick step and knows how to find her way to the basket. Mayla also showed that she can knock down the short jumper off the bounce when she needs to. On defense, she was a nice on the ball defender, using her length to pick pockets and alter shots. She finished the night with 13 points.