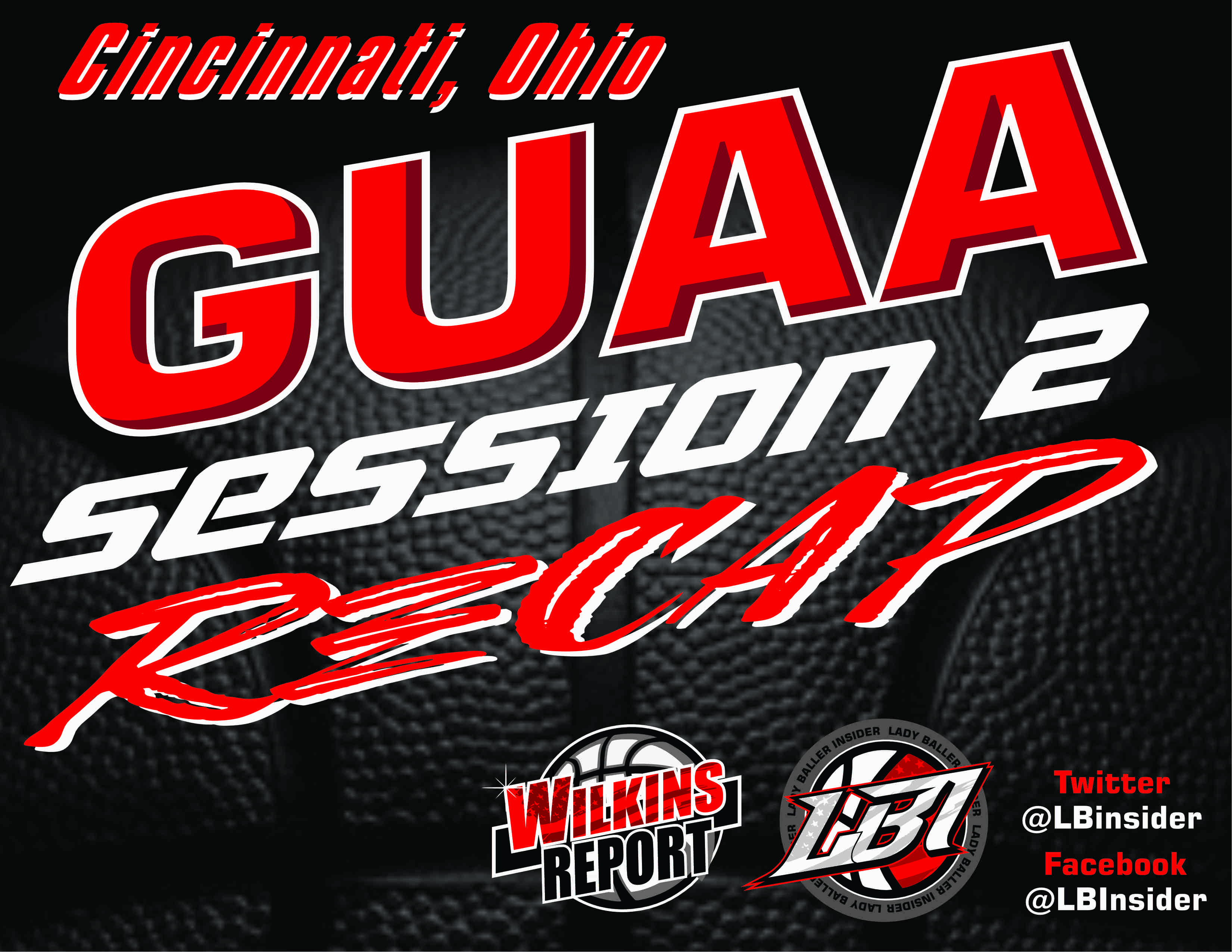 Cincinnati, OH – Next stop on my list is the Girls UAA Session 2. Everyone knows that circuit play is on a totally different level. Almost like a family rivalry. Every team given 110% to prove that they are just the best team at the tournament but the best team under the UAA umbrella. Some players made sure that their seat at the table was secure, and others made sure that a new chair with their name on it was added. In the end, it all added up to some phenomenal basketball.

Natiah Nelson 2024 | MI Storm 2024 GUAA
A little bit of this and some of that added to a big showing for Natiah Nelson. She can play positions 1-3, and she can play them well. She sees the floor and has a nice feel for the game, so she makes great decisions. When she saw the back of her opponents’ jerseys, it was full speed ahead, all gas, no brakes, straight to the basket for the bucket and the foul. On defense, she used her long reach to alter shots and play the lanes for steals. Let me not forget…she can shoot, too.

Stephanie and Stacy Utomi 2024 | MI Storm 2024 GUAA
I’m not the type of person that feels like twins must be mentioned together all the times. That is not always the case. Acknowledgment is earned on an individual level. However, this set of twins were truly made in basketball heaven. Their play compliments each other well. They fill in the blanks for each other. While Stephanie is aggressive around the rim on offense and defense, battling on the boards, and being a strong vocal presence, Stacy was attacking the gaps, making smart cuts, and knocking down long jumpers, being a quiet storm. With the Utomi twins, it is definitely a case of pick your poison.

Kiera Healy 2026 | Cincinnati Angels 2025
Kiera’s basketball IQ was by far the most impressive thing about her game. I watched her switch positions based on who was in the game with her, switch who she was defending after subs, and direct the flow of the offense even when she didn’t have the ball in her hands, without anyone telling her to do it. She is a scorer. She does it right on time and from anywhere. She never forced a shot and knew when to get the assist instead. On defense, her timing was everything! She set the tone and energy for her team. Fun player to watch.

Kali Fortson 2025 | Cincinnati Angels 2025
Very active on both ends of the court, when Kali was in the game, there was no denying she was there. She is strong and once she got planted, there was no moving her. She dominated on the boards, rebounding in and out of her area. She got up and down the court in transition, making herself available to score. Kali can take contact, but she can also dish it out.

Meeyah Green 2026 | B Maze Elite GUAA 2025
Tough as nails on both defense and offense, Meeyah was going to figure out how to get the ball and score a basket. She is extremely athletic with a high motor. If she got tired, she hid it well. She can shoot from deep but does not have an issue with penetrating the paint and getting buckets that way. Her upside is high, and I know her game is only going to elevate.

Bailey Russell 2026 | WV Thunder GUAA 2026
Bailey is a worker. She always goes full speed and gives her team strong and consistent play. She can handle the ball in the full court press, she never lost her cool, and she never dropped her eyes. She sees the court, hitting the open man, attacking the gaps, or spotting up to knock down a three. She is an impact player and doesn’t have to always score for that to happen.

Sienna Allen 2026 | WV Thunder GUAA 2026
Long with a quick first step, Sienna used her length and IQ to out play her opponents. She is a hustle player, especially on the defensive end. She had great on the ball defense and did a great job of anticipating passes and getting steals. She made solid decisions with the ball in her hands, with a high efficiency rate. Sienna is a shooter, from deep and from 12 feet.

Jasmine Baxter 2025  | Supreme Team UAA 2024
Jasmine was an inside presence that had great court awareness and knows how to play within the flow of the offense. She is a strong defender, even against players that were bigger than her. She never backed down from anyone. She is a tough rebounder on both ends. She made nice moves on the block, finishing strong even with some hard contact.

Makailah Davis 2025 | Team Curry 15U GUAA
A high motor with relentless play, Makailah is a battery pack for her team. She goes 100mph every possession and does not let up. She is an excellent on the ball defender. She plays physical and can take just as much as she gives. When she gets going downhill, she gets the basket whenever she wants to.

Toby Nweke 2024 | Germantown Lady Panthers GUAA 2024
Toby is a pure athlete that can score while playing multiple positions. She has an arsenal of moves that kept the defense back peddling and allowing her to score easy buckets. She is quick with and without the ball in her hands. Her on the ball defense was smothering and kept her team running the floor in transition. Toby can jump, making her a great rebounder and shot blocker.

Danika Barnes 2025 | Germantown Lady Panthers GUAA 2025
Danika is special. This weekend she showed that she can hold her own in many different positions and situations. Holding down the 3-5 spot, she was a top rebounder, and defender, and could score. She often finished at the rim with and without contact. She is strong enough to post up and quick enough to step out on the perimeter and defend.

Karma Payne 2024 | BBA 2024
Quick and athletic, Karma showed that she is a game changer. She can take over in more ways than one and on both sides of the court. She can create her own shots and executes in the clutch. She often helped control the flow of the offense, seeing the cutter and open shooter. She can also press on the gas and be an energy source, switching gears and speeding the game up. She is a great player with a solid game.

Jordan Zubich 2024 | Minnesota Fury 2024 GUAA
Jordan is the muscle on the team without being the muscle on the team. She is a tough, vocal leader with a certain grittiness to her game. She is played in your face, hard-nose defense from start to finish. She got on the floor to fight for loose balls and took just as much grit as she gave. She is also a top-notch scorer. Hitting some big buckets at some very big moments.

Jocelyn Land 2024 | Minnesota Fury 2024 GUAA
Jocelyn was a matchup nightmare. She can play in the post, showing off solid footwork, battling on the boards, and altering shots. She can also step out on the perimeter, setting the nets on fire from deep and often. She sees the court and was great at reading the defense. She took advantage of mismatches, positioning herself to score and calling for the roc.

Aissa Alice Diallo 2024 | Become One GUAA 16U 2024
Aissa has a solid frame that she uses to box out and dominate on the boards. She was awesome at getting down the court quickly in transition on both offense and defense. She can put the ball on the court and give some footwork that opens her right up for easy baskets. She has good timing and blocked shots left and right.

Jaliyah Smith 2025| All Alabama GUAA-Smith 2025
Jaliyah knows how to use her length and speed to her advantage on both offense and defense. She rebounds and takes off, going coast to coast and finishing strong. She plays the lanes well on defense, getting steals and creating turnovers. She works to get open, moving well without the ball and setting herself up to knock down shots from everywhere. She is athletic and versatile.