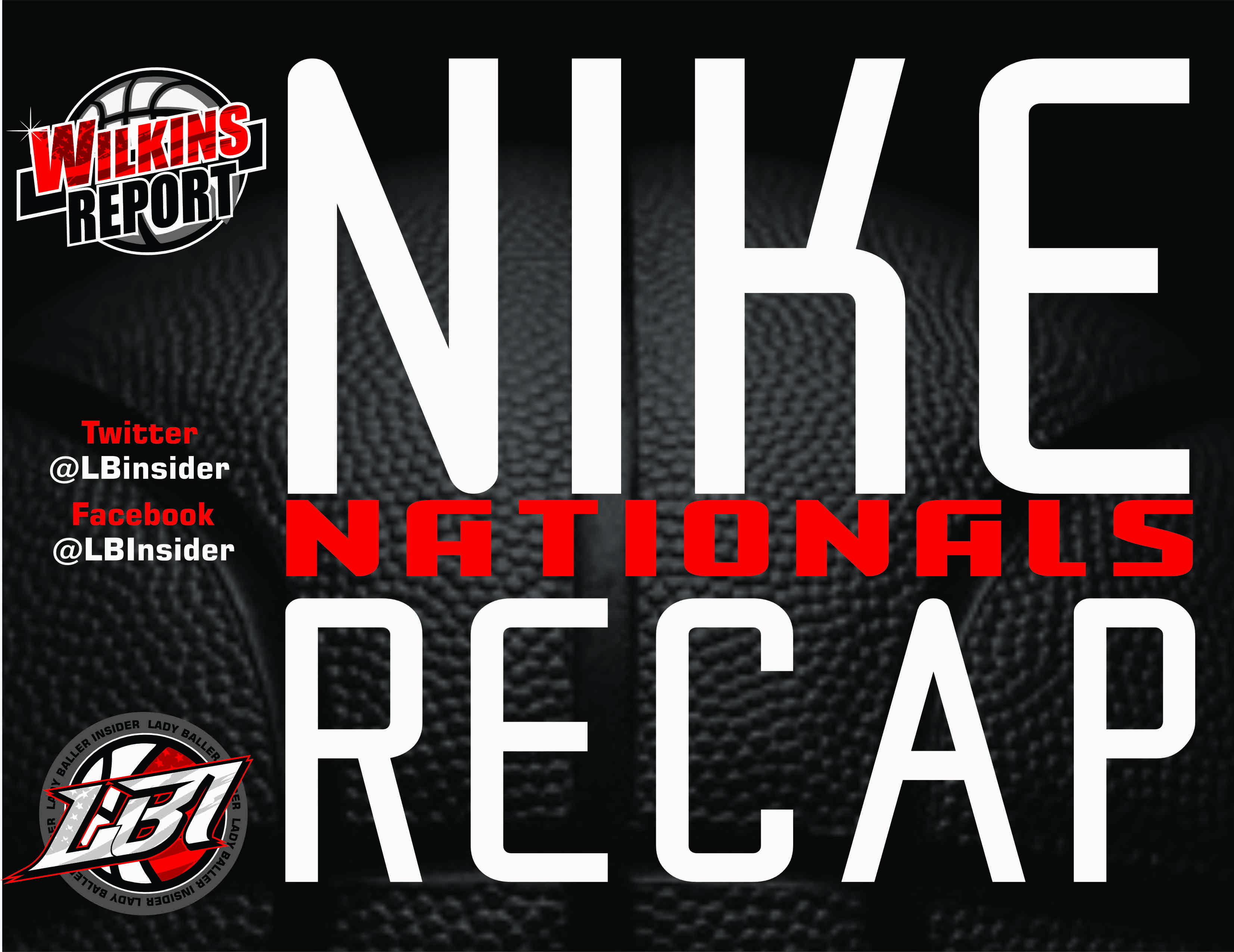 Chicago, IL: NIKE Nationals and TOC in the same city, same building brought out all of the top players, teams, and coaches, and the fans were not disappointed.

My focus was on the younger teams and players to see who has next, and a few jumped out for different reasons.

Syriah Daniels 2024| AL Southern Starz 16U
Daniels is on my most improved list from early spring until now. She is so explosive and athletic and has a sweet soft touch to finish around the rim. This week she showed a nice ability to not only score in traffic, but she did a great job of being a playmaker, showing to be unstoppable catching at the high post and beating her defender for two or a nice feed to a teammate.  She rebounded the ball well and was a force on defense.

Nya Smith 2024 | AL Southern Starz 16U
Nya is a nice guard who plays with controlled quickness, excels in transition, and did a great job attacking the lane off the bounce to create plays. Nya played with a smooth pace, demeanor, and a high IQ, never getting rattled and always seemed to be in control. Nya was super tough on defense, using her athleticism and quickness to cause havoc.

Callie Levin 2024 | All Iowa Attack
Callie plays with a certain swag and bounce that’s needed to play at the next level. She has a tight handle and an assortment of moves off the bounce to score the ball. She is a very willing passer looking to involve everyone around her, using her exceptional vision and ball skills to make the right play. She plays with great confidence and leadership.

Aniya Foy 2025 | Cyfair Elite 16U
Foy is a big guard with good length, a nice handle, hits the jumper, and has a nice wiggle to her game. She did a great job slashing to the hoop or hitting her defender with a combo package to free herself up for two. Aniya has all the tools to be one of the next great Cyfair guards.

Kennedi Alexander 2024 | Cyfair Elite 16U
Kennedi is a long athletic post that did a great job doing all the things necessary for her team to have success. She was a force inside on defense, she scored in the paint, hit the 15- footer, and made some sweet passes to cutting teammates off the high post. She was a game changer down low for her squad.

Lily Brown 2024 | Pro Skills 16U
Lily is a great leader who is a super quick guard that made plays off the bounce and was effective shooting the ball from deep. She did a nice job using the ball screen to create for her and her teammates. She took pride in locking up on defense and was the Pro skills tough ball pressure leader.

Haylen Ayers 2027 | TN Flight 16U
Haylen is the real deal…. She has a great feel for the game, and just flats out know how to score the ball. She showed an explosive first step beating her defender off the bounce, and a nice ability to find her spots to get buckets. She has a very good stroke from deep and is only a 2027, the sky is the limit for this young lady.

Jade Jones 2025 |Miami Suns Larkins
Jade is an athletic, aggressive wing with a good handle and explosive moves to the basket. She did a great job using her athleticism to get her shots off and finish over and around the defender. She also showed a very nice touch from the outside.

Kayl Petersen 2024 | Wisconsin Flight Elite
Kayl is a very versatile guard who can score the ball in many ways. She is extremely hard to cover because she is very comfortable scoring off the bounce, slashing, or posting up. She has a very advanced feel for the game, and that, with her ability and skill, is a scary combination for her opponents.

Taylor Stremlow 2024 | Wisconsin Flight Elite
Taylor, the floor general of the squad, has a nice deliberate game and she just finds ways to get it done. She plays with great pace and composure, never getting rattled, and displayed a nice ability to score off the bounce, knock down the triple, or make a nice pass to a teammate. Possessing a nice crossover, Taylor was a mainstay in the lane, making plays.

Ava Zediker 2025 | All Iowa Attack
Ava is a very fundamental guard who takes care of the ball, hits the long ball, and is very scrappy getting to all loose balls. Ava had an unbelievable first half vs. the Rise in the Semis, showing that she is a big time go to scorer getting in the lane for buckets or hitting the trey ball. She also took pride in being a hard-nosed on the ball defender.

Talayah Walker 2024 | Philly Rise (EYBL CHAMPS)
Talayah had her best game in the Semi-final win this week when she refused to let her team fall. She was super aggressive, getting to the rack scoring over and around any defender in her way. She knocked down the 3-ball, scored in transition, and was a menace on defense. One person does not win you a title, but without Walkers Semi performance in the second half, we might be reading a different headline!!  As heard on coach’s row during her run, ‘Number 20 is a BEAST’’!!!!

Taylor Derkack 2024 | Philly Rise (EYBL CHAMPS)
Taylor, too smooth to rattle Derkack, hit big shot after big shot in their championship run, none bigger than a dagger three from the corner shortly after a steal and a bucket in the Semi-final win. She never seems out of control and has a smooth demeanor as she gives her opponents buckets. She is a big-time player that stepped up when her team needed her.

Ava Mckennie 2024 | Philly Rise (EYBL CHAMPS)
Ava was balling all week but decided to turn it up in the championship game. She was all over the floor rebounding and making defensive plays, but the spotlight fell on her offensive game this time. She used her length, speed, and versatility to score the ball in multiple ways excelling in transition and making some sweet moves to the rack. Ava was my MVP in the title game.

Aaliyah Crump 2025| North Tartan 16U
Crump is special; as soon as you see her move, you can tell immediately that she is big time, and she definitely did not disappoint. Using her superior athleticism, length, and strength, she powered her way through, up, and over her defenders, using her silky soft touch to score the ball in transition or in the flow of the offense. She rebounds the ball at a high clip, and although she could, she never seemed to force the action, just making plays off of her outstanding instinct and feel for the game. One of the top players in the country and only getting better!

Trinity Wilson 2024 | North Tartan 16U
Trinity had some stretches of being unstoppable this week; she has great hands, nice footwork, and does a great job establishing position and demanding the ball, which made it nearly impossible to stop her. She made pin point passes out of the double team and was a force rebounding the ball for North Tartan.

Savannah Gardner 2024 | North Tartan 16U
All teams wish they had and need a player like Gardner in their life, and North Tartan has the real deal that does it all. She easily was one of the most versatile players I saw all week, doing a number of things at a high level and with a very high motor. She scored the ball from all over, made big time hustle plays, rebounded the rock, and maybe most impressive, took on and looked like she enjoyed covering the other team’s best player.  North Tartan had a great run coming up just short in the title game, but Savannah should go home feeling like she gave it everything she had!

Jordan Speiser 2025 | Missouri Phenom
Lights out shooter……Jordan has a very fluid game. She knows where she wants to get her shots from, and she does a great job moving without the ball to get to her spots to get her shot off. She does not need much space, and her stroke is so pretty and effortless that you are more shocked when she misses, which is rare. Jordan showed she could also put the ball on the floor and create her own shot. She plays with a great feel and knowledge of the game; she is going to score a LOT of points in the next few years!