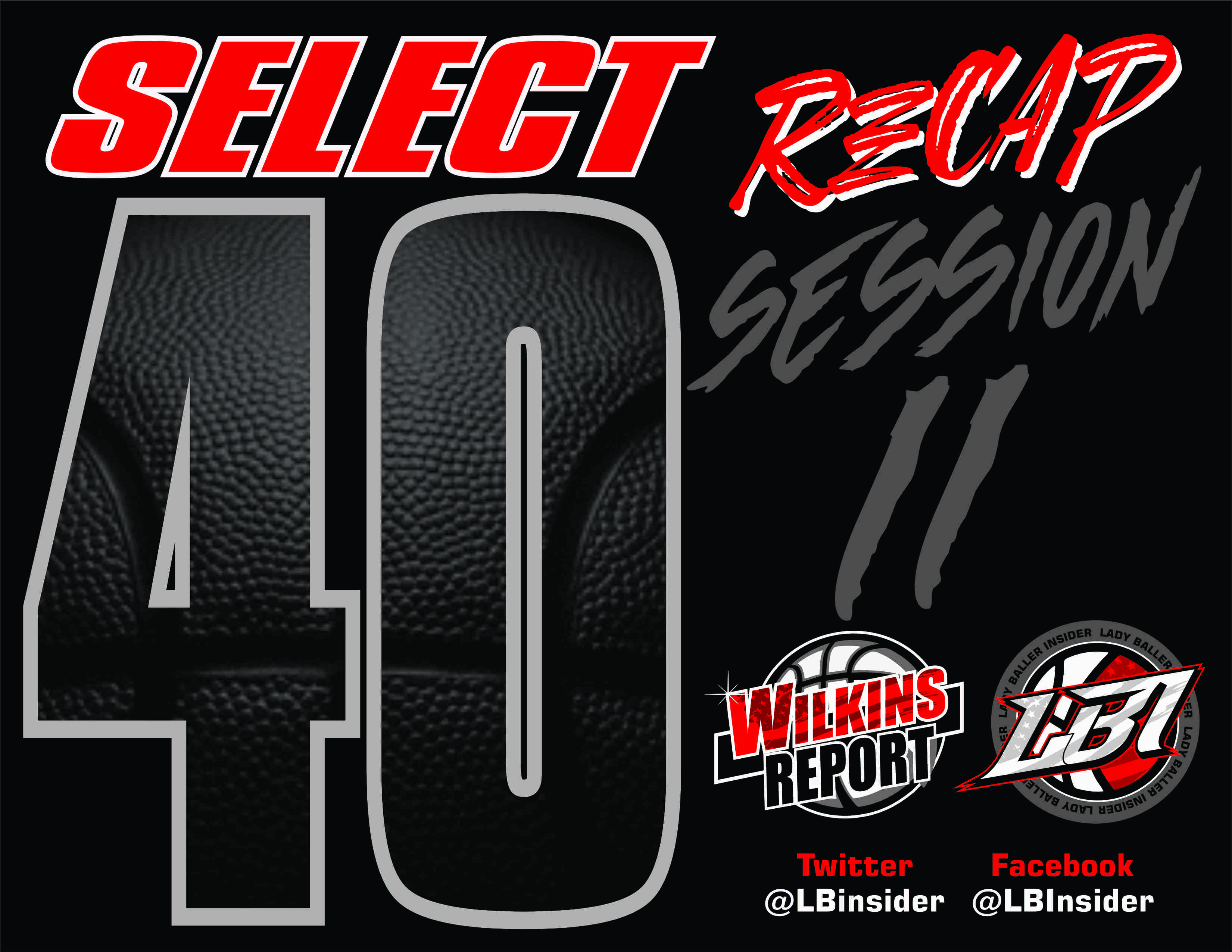 Indianapolis, IN: The Select 40 games in Westfield featured some great talent and competitive games. From buzzer beaters to OT thrillers, from stock risers to dominant performances, Select 40 Session II had everything you’d be looking for out of the top independent clubs in the country.

2026 Isabella Ragone | Team Tre 2024
The smooth lefty has a good pace to her game. Ragone’s versatility was on full display vs. SLAAM as she was able to make triples off the dribble and fade off screens. She also pushes the ball on the defensive rebound and delivered to shooters for open shots in transition. She played with so much composure and pace as a 2026 it was scary.

️2024 Leila Wells | SG Legends U
Leila Wells was phenomenal on both ends this week. She has unlimited range on her three-ball and tough baskets on the interior. Most impressive was her toughness on the defensive end. Wells played at an elite level, as did the Legends U 16U team.

2026 Halle Dolliver | Nebraska Supreme S40 2025
Dolliver was so good and steady for Nebraska Supreme vs. Mac Irvin. She came out like gang busters and impacted the game by doing the dirty work. Offensive rebounds, cutting back door, and getting a loose ball all for baskets. As the game went along, she eventually showed off her shooting stroke from 3. Dolliver packaged together a great all-around game.

2025 Sidni Middleton | HLBA 2023 (AR)
Sidni Middleton is the definition of having a well-rounded game. She was phenomenal with the ball Sunday afternoon, as she was able to thread the needle on pick and roll passes and hit the shooting pocket on draw and kicks. Middleton also found a way to get herself going by fearlessly attacking the basket, spotting up, and knocking down triples with range. Middleton was as solid as they come, even playing up a few years at the 17U level.

2024 Kayla Lorenz | Team Stuck 2024
On fire! Kayla Lorenz was raining threes from all over on Tuesday. Lorenz is fundamentally sound on the catch and can kill you with the three or off the pump fake. It was her time to shine vs. Indiana Blaze, as she had it all going her way. Lorenz is a sniper who you cannot afford to let catch the ball in rhythm. She was the X-factor in Team Stuck's 4-point win.

2024 Zahra King  | New Heights NYC Red
Big basket after big basket, Zahra King was money for New Heights in a thrilling win over Legends U. She was electric in transition and even better off the bounce. Her speed, explosiveness, and ability to counter are elite and allowed her to get to any spot she wanted on the court, and she delivered repeatedly. King was lightning personified.

2024 Kaniya Boyd | Vegas Bulldogs
Kaniya Boyd has all the sauce. She was electric in transition, complete with euro step and wrong foot, same hand finishes. You can tell this young lady loves the game as she was great on both ends of the court. Boyd is definitely entertaining to watch.

2024 Ahnay Adams | MCW Starz S40 2023
Anyone in the country would want to play with Ahnay Adams. She is the consummate PG. Adams spent the entire game using her ballhandling skill and floor vision to set up teammates for baskets in their sweet spots. She seemingly delivered every single time, whether in transition or in pick and roll situations. She’s also a great teammate. I can’t tell you how many times she got “dap” or hand touches after good or bad plays. She’s the only ‘24 on a team of ‘23s, but she is the leader. This kid truly leads by example and is a championship type PG.

2024 Xamiya Walton | Mac Irvin Fire
There aren’t many more steady and reliable than Xamiya Walton in the 2024 class. Her composure in high pressure situations is uncanny. That composure allowed her to knock down big 3s at crucial times in Mac Irvin’s comeback win over New Jersey Sparks. Walton is clutch.

2024 Rachel Harshman | Indiana Blaze
Scored in a plethora of ways. She had a baby hook off a back to basket feed. Followed that up with a three. She made midrange shots and did just about anything else she needed to do to score the rock. Harshman has some real depth to her game.

2023 Quanirah Montague | New Jersey Sparks Hines-Allen
Quantirah Montague really could be special. Like special special. She is so long and agile. She showed guard skill on the perimeter and was unstoppable down low. Soft hands and the ability to finish are next level. Scores on all three levels effortlessly. Skill and potential wise, I was thinking Jonquel Jones, IF…IF…IF she reaches an elite level of conditioning. Make no mistake; all the tools are there.

2026 Xyanna Walton  | Mac Irvin Fire S40 2025
The kid can shoot it! Walton also has a variety of ways to get to that shot off the dribble. She has very good footwork and understanding of how to create space. I was very impressed with her offensive skill set.

2025 Destiny Jackson | Mac Irvin Fire
Destiny Jackson is a competitor in every sense of the word. She seems to live for the challenge, and she can answer the call. Jackson easily excelled at her PG duties, whether pushing and making a great play in transition or facilitation offense. Jackson was a handful on both ends of the court.

2025 Jasmyn Cooper | MCW Starz Elite 2024
This young ladies skill level at her size and age is elite. She got game as smooth as a baby’s butt. She’s a matchup nightmare for opponents as she can stretch the floor, go off the bounce, or play back to the basket. She also showed the ability to make a variety off passes within the MCW offense. She can do it all in the offensive end. Definitely being under recruited right now.

2024 Alexis Rosenfeld  | New Jersey Sparks Hines-Allen
Alexis is a winner. She does all the dirty work: post hard, sets great screens, runs the floor, gets after loose balls, etc. Love her size and skill set, along with her business like demeanor. She was one of the most consistent PF's I saw all week.

2023 Carlee Casteel | Shock Basketball S40
Scored in bunches early today with multiple long threes and floaters in the lane. When Carlee gets hot, watch out!

2023 Norah Clark | Shock Basketball S40
Norah has a bag y’all! She mixed in midrange strep backs with super aggressive drives and threw in some spin moves for a cherry on top.

2023 Shonda Jones | Legends U S40
Jones was definitely a stabilizing factor for her team today, as they pulled out a close one early. She made big-time plays on the offense end and sacrificed her body with stops and charges on the other end.

2026 Isabella Ragone | Team Tre 2024
Her will to win and score the ball put a lot of pressure on the defense today. She put her wide range of skill on full display while hitting step backs, catch and shooting threes, and working the post when necessary as well.

2025 Allie Daniels | OV Lady Dragons
Daniels had a great showing this afternoon, hitting from a good variety of areas on the floor. She sank some perimeter buckets but got busy in the paint, showing off next-level footwork inside.

2027 Sienna and Sheree Wilson | Central PA Dynamite 2025
These electric sisters showed some major upside as absolute babies on the court today. Athletic with nice quickness and tenacity on the ball, they pestered ball handlers throughout. With good speed off the bounce, they were able to blow past defenders with ease as well

2026 Daisy Throckmorton | Jason Kidd Select 2025
Daisy was steady and consistent throughout the game today. She scored off the bounce easily at the rim and made multiple catch and shoot threes out of half-court sets. Her game was smooth and almost effortless.

2024 Nyaluak Dak | Nebraska Supreme 2024
Her unassuming demeanor took a backseat to her style and skill on the court today. She showed flashes of a bit of everything you could want in a power forward. She finished contested shots in the lane, made great post to post passes, and easily handled the ball on the break.

2026 Saniyah Hall | Legends U 15U
Absolute assassin. This kid has some major upside, along with some major skill to go with it. She stretches the floor with her ability to knock down long shots but can handle the ball with the best of them and make plays at the rim.

2025 Jasmyn Cooper of MCW Starz has the goods…A good rim protector makes all the difference…kids are making triples from further and further back…Legends U 15U could be, well, legendary as I saw more coaches at their games than you would normally see at that level…interior passing from guards needs to be emphasized among smaller guards who think they have to score to make an impact…during eval period, you have to be on a team where you can play, brand and clout doesn’t matter unless you PLAY…playing up is overrated unless you PLAY…no big girl has more swag than Aalyah Del Rosario, fun to watch…it was cool seeing former Piston and Pacer Rodney Stuckey coaching up his girl's team.