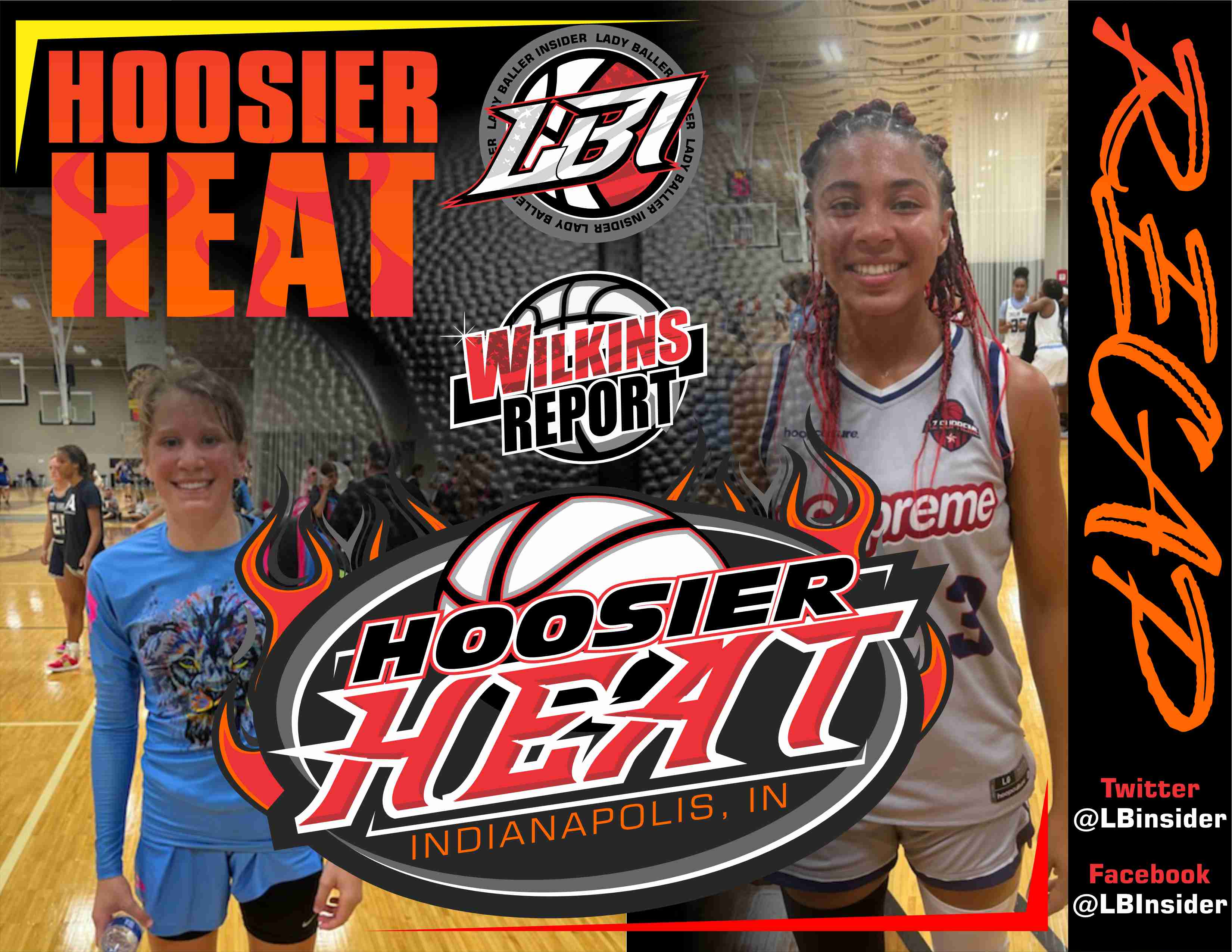 Indianapolis, IN: Hoosier Heat is always loaded with big-time teams and big-time talent and this week was no exception.  The gym was full of coaches on the baselines and a number of the young kids took advantage of the opportunity to put their names on the map. Here is part one of a few young girls they showed they got NEXT!!!

Tatum Brown | 2025 FBC Hoopstarz 16u
Super playmaker with a great handle, and great court presence, and showed she could get in the lane and create for a teammate or herself pretty much at will. She wowed the crowd multiple times with slick dimes or crafty finishes around the rim. Brown is definitely a PG one.

Kyla Green | 2024 FBC Hoopstarz 16U
Kyla has a sweet stroke from three along with the ability to put the ball on the floor and create offense off the bounce. She showed tenacity on defense and was a terror out in transition getting buckets.

Jayshlyn Vega | 2025 CFE 2024 3SSB
Jayshlyn had an injury as the week went on but that did not stop her from leaving an impression on coach’s row. Vega showed nice quickness getting into the lane making some big-time plays with the ball in her hands and an advanced ability to score the rock. She scored in the lane and shot the ball well from deep displaying range and supreme confidence.

Sophia Munoz | 2025 Guard CFE 2024 3SSB
Sophia is on her way to being a household name not only in Florida but in the country as well. Only a 2025 Sophia is a tough, physical quick guard who has exceptional ball skill and is pretty special scoring the ball off the bounce and from three. She plays with great poise and competes at a very high level, coaches if she has not made your board yet, check her out.

Carmen Richardson | 2024 CFE 2024 3SSB Carmen is a great leader and has a nice combo package that allows her to be a threat to get a bucket or drop a dime whenever she wants. Her handle is tight and she uses her quickness and high basketball IQ to get to her spots to make plays.

Delilah Soltys | 2025 FBC Carolina Elite 15U GUAA
I owe Delilah a big thank you! Sitting on coach’s row I began to brag about how good I thought she played the day before and right on cue Ms. Soltys decided to take over the game. She slashed through and around the defense, she hit the three, she scored at the rim, she dropped dimes to teammates and all while showing supreme confidence, a high IQ, and great court awareness.  Delilah was one of the top 2025’s I watched all week.

Errianna Gooden | 2025 BTR 16U
Errianna is a nice big guard with a smooth handle and a tough physical ability to get in the lane, take contact and score the rock. She did a great job making the right reads in pick and roll situations and showed a nice stroke shooting the long ball.

Lauren Borsenik 2024 | Michigan Storm 2024 Rise
Lauren had a good few days scoring the ball inside and out. She not only was a threat to score in the paint but she showed the ability to hit the jump shot along with putting the ball on the floor and attacking her defender off the dribble. She rebounded well and competed at a high level.

Amaya Smith 2024 | Michigan Storm 2024 Rise
Amaya is asked to do a lot more on this squad, she handles some point guard duties, locks up on defenses, and is asked to be the lights out shooter she normally is. This week she did a great job showing that she can handle the ball under pressure run the show and remain aggressive in attacking the lane. Amaya opened a lot of coaches' eyes this week with her ability to not only be a dead-eye shooter from the wing but she displayed physical toughness and also was able to be a combo guard when necessary.

Brianna Thomas | 2024 Michigan Storm 2024 Rise
Brianna Thomas is a throwback tough as nails guard who backs down from no one and has the game to go with it. Bri is known for being a light’s out shooter from three but this week she was in attack mode doing a great job putting the rock on the floor and getting in the lane to make plays.

Taliyah Henderson 2025 | Arizona Supreme Blue
Taliyah definitely has the look and she quickly showed she had the game to go with it. A very physical wing with great hands and a soft touch, she was super aggressive attacking the hoop and rebounded the ball at a high clip. One coach on coach’s row mentioned ‘that’s a pro body right there and she’s only a 2025’!!!!

Camryn Golston | 2026 FBS Supreme 14 GUAA
Don’t let the size fool you. Camryn is electric with the rock in her hands using her super quickness and great handle to create for herself or a teammate. She showed a crafty skill to score over and around taller defenders in the lane backing down from no one. She took pride in locking down on defense picking up the opponent's 94 feet with relentless pressure.

Aizlyn Albanese | 2025 Michigan Storm 2025 GUAA
Aizlyn is a tall smooth guard with a killer instinct to score the rock. She has a sweet stroke from three and has a nice ability to beat her defender off the dribble for the pull-up or to finish in the lane. Aizlyn plays with an extremely high IQ and has a great feel for the game.

Zaniah Zellous 2025 | WV Thunder 15U GUAA
Zaniah is a super athletic wing who dominates the lane scoring the rock. She spins on defenders, slashes, hits floaters you name it she has it in her bag. She also showed a nice ability to put the ball on the floor and create off the dribble. Zaniah, already holds offers from some pretty impressive programs but stand by there are many more to come!!

Jaedin Griggs 2026 | Slaam 2026 Woodson
Her whole team playing up a grade you wouldn’t be able to tell by the way they competed at such a high level. Jaedin showed she fit in by knocking down multiple triples with a pure stroke and the ability to get her shot off regardless of the defender. Showing no intimidation to the situation she was aggressive in looking for her shot and she did a great job finding her spots to let it go and usually it was cash money!!