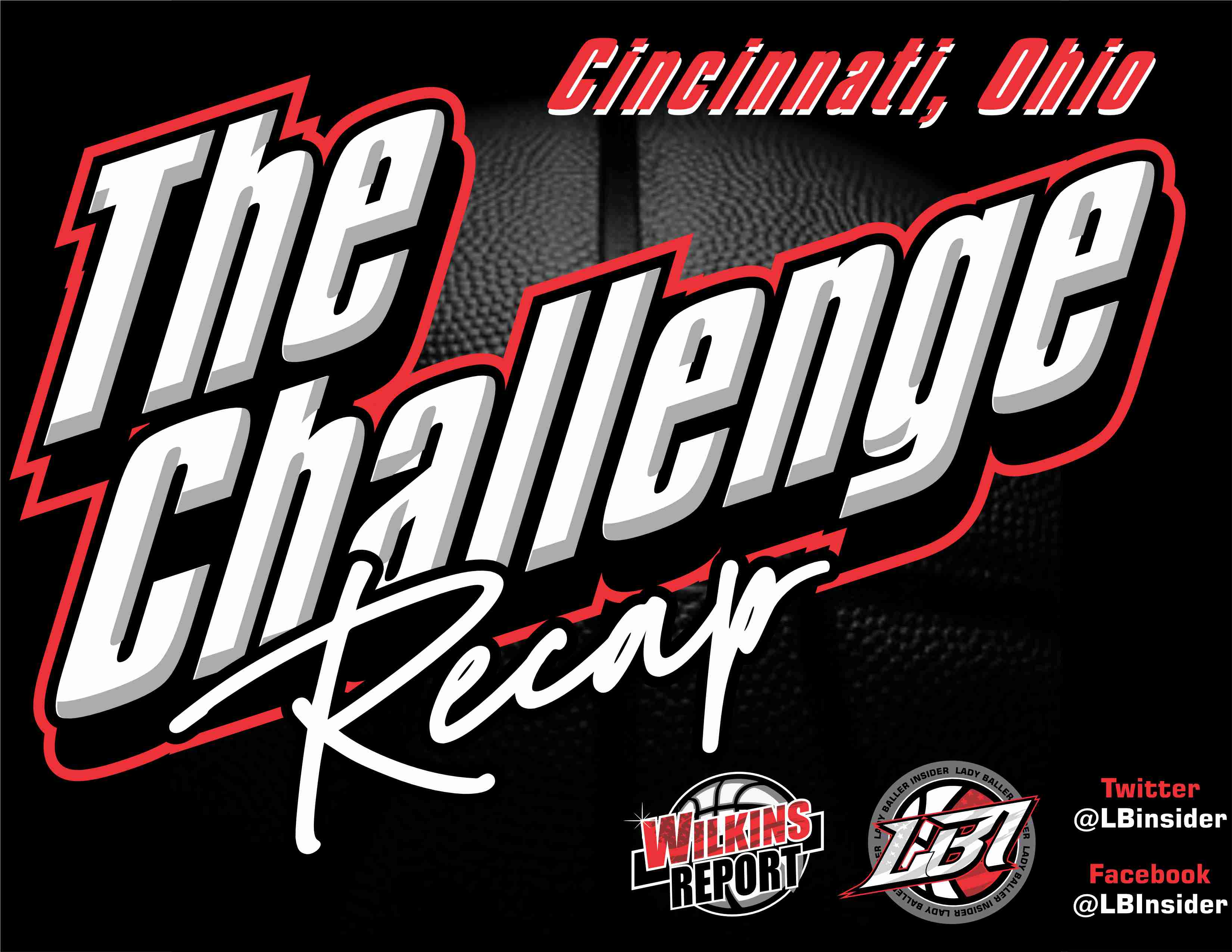 Cincinnati, OH: The Challenge. LBI is getting the party started in Cincinnati, OH for The Challenge. S40, Under Armour, Adidas, and much more provided some cross shoe brand matchups as there was great energy in the gym and competitive matchups. Here are a few standouts…

️2024 Helen Holley | Legends U
Hellen Holley was the fire starter in Legends U blow out win over Elevate Elite on day 3 of The Challenge. Holley impacts the game in a way that few can as she is ferocious on the boards and runs the floor like her hair is on fire. Her athleticism and elite second jump allowed her to grab a half dozen offensive rebounds as she was able to convert many of those into second chance points. She’s a handful in the paint.

️2025 Logyn Greer | Elevate Elite 3 SSB 2024
Long and athletic, Logyn Greer is effective in defense but her ability to stretch the floor and knock down the open three was eye catching. Greer has some room to improve in the strength area but her ability to handle the ball and shoot the three will make some lucky coach happy at the next level.

2025 Malia Ruud | Northwest Blazers Grey 2024
Malia Ruud is a big time post player. I could argue she had the best footwork of any big in the city of Cincinnati. Her pace was unbelievable in the post as she was able to score and/or get to the free throw line on her 2nd, 3rd, and even 4th counters in the paint.

️2024 Ariana Williams | Example Sports 2024 GUAA
Williams is a bit raw still which is scary, but she impacted the game in many ways including running the floor, crashing the glass, and being a pest on defense on the perimeter and in the paint. Williams, a lefty, even displayed the ability to hit the open triple. She’s one to keep an eye on.

2025 Kira Reynolds | Legends U
Kira is probably the most versatile PF in the country in the 2025 class. Whether in transition after an offensive rebound or after receiving the ball in the post, Kira makes the right read and delivers even in tight spaces. The 6-4 forward with guard skill anchors the Legends U defense as they went 5-0 at The Challenge.

2025 Ryiah Wilson | Indiana Blaze
There is not a better on-ball defender in the gym. Tenacious with great defensive instincts, Ryiah created numerous opportunities for herself and others in transition. The kid has a big-time motor and is getting better every time out.

️2027 Sydney Savoury | Legends U
Savoury is impressive in stature and maturity. She’s even more impressive in her ability to consistently deliver in the way she does at such a young age. She scores, at times, effortlessly from all three levels. The beauty of her game is that she doesn’t force anything and truly allows the game to come to her. I say that because I think there is going to come a time when she will dominate games when she decides she wants to. She’ll be that kind of player

2026 Saniyah Hall | Legends U
Sheesh…young lady is a problem. Saniyah Hall passes the “eye” test and the “real” test. She puts her finger prints in a game on both ends of the court with her ability to score the ball and defend multiple positions. Didn’t take long at all over the course of several games to see she’s an impact player.

2025 Jasmine Davidson | NW Select (OR)
The Truth. The Answer. The (fill in the black)…I was so impressed with this kid. She has feathery touch around the rim and a tremendous feel for the game. My favorite thing about her is that she knows she’s good and has to do ALOT for her team but her demeanor and business like approach are that of a professional. Skill, size, length, and basketball IQ combination is most serious as my boy Jason Key would say. Davidson is the real deal and was magnificent against very stiff competition.

2024 Summer Davis | Legends U
Summer has a dog on the bone mentality…a relentless nature to her game. She was ultra aggressive on the offensive end which comes from her undeniable confidence in herself to make the shot. I love that she can get and make shots from multiple angles and footwork patterns. She’s a handful, to say the least.

2025 Janiyah Williams | Arkansas Banshees Sadler 2024
I really believe Janiyah is going to be an elite shooter at the next level. Her shot was so smooth and effortless on Thursday at  The Challenge. In fact, I don’t think she shoots enough as she is very patient but with a stroke-like she has, I would imagine she’s going to fill up some boxscores as July moves on.

2025 Keziah Lofton | Arkansas Banshees Morgan
Lofton has a lot of tools but most impressive is her motor. I don’t think she came off the court in the two games I watched but she managed to play at a high level vs two very good teams. I’m one particular game, she struggles a bit early but as the game came down to the wire, Lofton made big play after big play.  She made great reads and was murder going left as she used her elite frame for a PG to get to any spot on the court she wanted.

2023 Cecelia Borchers | Team Ohio
In the early game of Team Ohio’s day, Cecelia Borcher showed off her all around game. When her team struggled to put points on the board early, Cece found a way to make it happen from a defensive standpoint. Her length proved to be problematic in their full-court pressure, so she was able to get out in transition often. Cece excelled in the quarter court, however, draining threes, using her smooth handle to get to the rim, and even crashing the glass for second-chance points as well.

2025 Kylie Wells | Example Sports 2025 GUAA
It’s always fun to see a player dominate a game by doing all of the intangibles and making the hustle plays. Wells played with such energy and toughness throughout the game. She’s one that demands attention. She was a flat out beast on the glass. The opposing coach stayed furious at his team for not boxing her out and keeping a body on her. She was relentless at getting to the paint as well. I’m not sure she didn’t see a double team in the lane one time today. To make matters worse, she stepped out and hit long bombs, keeping the defense honest.

2026 Gabriella Moultrie | NW Select 2024
This little point guard has some major go! As the youngest player on the court this morning Gabriella managed to throw in a cool 28 points. Her maturity and composure was through the roof on that court today. She seemed to always be in the right spot for kick out threes or made the necessary cut to the basket for an easy two. Gabriella scored in the lane with some craft moves when they tried to take away her deep shot pretty efficiently. Although very young now,  she’s got a big-time future to look forward to.

2025 Reyce Mogel | NW Select 2024
Some players just have that look. I knew right away she could play. Her smooth lefty stroke was next level for sure. Reyce took her time, never rushed, and released the ball with major confidence every time. Her feel and knowledge of the game was evident as well, as she made timely basket cuts and seemed to always be in the mix in transition. Because she’s on a team that’s well coached and plays the right way, she’s only going to see her stock rise in the future.

2024 Sarah Rekowski | MBA UAA 2024
Sarah had an absolute breakout game with perfect timing in front of some eager coaches this afternoon. Her constant and persistent drive to impact the game not only kept her team in the game, but it’s also what got them over the hump. Sarah got deep post position and punished defenders for it. She hit players with up and unders, buckets from the left or the right, and flat out bullied girls at the rim. Her late in the game aggressiveness turned the tide for MBA, they fed off of her energy to secure a nice comeback win in overtime.

2025 Jamison Philip | Northwest Blazers Grey 2024
Miss Jamison Philip grabbed my attention immediately. Her tenacity and dedication to defense was evident. She racked up steal after steal on some very good next level basketball players. Philip’s off the ball defense was nothing to play around with as well, she jumped passing lanes and bumped cutters off their line repeatedly. She was completely disruptive to what the opposition had in mind. Jamison not only pestered the perimeter players, but she also managed to tie up or strip post players when they brought the ball down in her area.

2025 Monique Mitchell | Indiana Blaze
“She’s got a quick release!” That was the first thing I heard out of the mouths of coaches sitting baseline while watching Mitchell play this week. The 5’11” guard put her motor to the test, she defended players of like size as well as smaller perimeter guards as well. She threw herself around the court making big time energy plays on the ball, not to mention in the passing lanes. The Blaze guard was hitting from deep early, which really opened up her midrange game. Her ability to blow past her primary defender and elevate over the help really makes her an interesting and promising prospect in her class.

2025 Mari Gerton | Legends U 2024
Mari Gerton, if you don’t know her name, shame on you! This girl can flat out hoop. She’s one of those players that makes you sit up a little taller when she gets the ball in transition, and without fail she ends up giving you something to ooh and awe about. Mari is an all-around guard in the sense that she can score the ball as well as she can distribute it. She is a legit bucket in transition, knocks down the three ball at a very high clip, and will give you a behind the back pass to your face if you’re not ready. This young star-to-be needs to be on your radar!

2024 Ava Heiden | NW Select 2023
Wow. Having just set my eyes on her for the first time, I must say, I was extremely impressed. She was so powerful and dominant in the paint. Ava put on a clinic on how to post and seal and keep working for the entirety of the possession. She thrashed around even the strongest and biggest post players this week. Her interior footwork was on full display as well, exploding up as she seemingly demonstrated the George Mikan drill in a game. Another impressive aspect of her game was her ability to rim run and outwork her opponents. Ava was definitely one of the best interior post players I’ve seen in a while, fun to watch for sure.

2025 Marcayla Johnson | Arkansas Banshees Sadler 2024
Marcayla has so much heart. With her team down most of the game, Marcayla stood out as she just kept coming and coming. Never taking her foot off the gas pedal. The skilled guard used everything in her bag and there is ALOT in that bag.

LBI Speed Round…2024 Sinai Douglas is fearless, gonna make a few of some P5 coaches think about taking her despite her size…2026 Lola Lampley had a coming out party vs Banshees 17U, she was scary good…2024 Taliyah Parker does so many things on the court, oozing versatility…Mari Bickley get buckets PERIOD…I love Mac Basketballs Mary Meng she doesn’t get enough pub…MBA UAA 2023 is so disciplined and good. That core has won a lot of games together and has been fun to watch…Better get a leash for Legends U 15U and follow them everywhere they go because if you are a college coach, you don’t want any of those kids to get away.