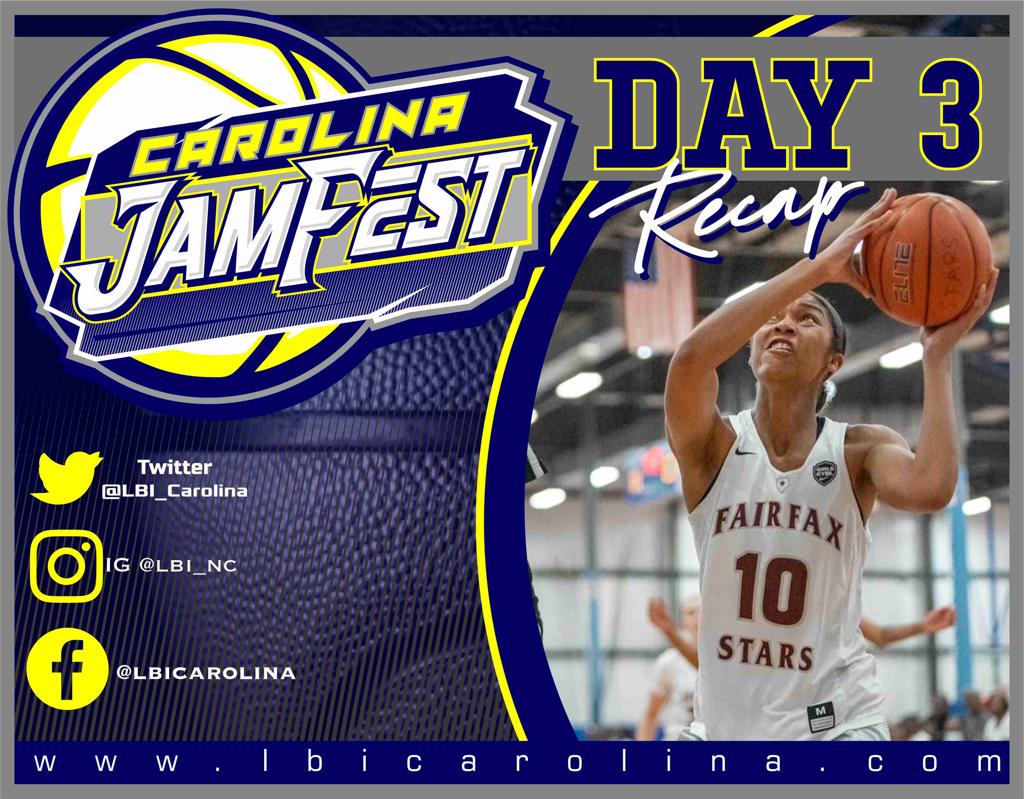 Concord, NC – The third and last day of LBI Carolina JamFest was not much different than the other days. Although fatigue and wear and tear were obvious at times, the competitive spirit remained the same. The games were still intense. The play was still top level. The excitement was still high.

Reychel Douglas 2023   CP3 Flames 17U EYBL Morris
A vocal leader that can handle the rock, Reychel was a power source on both ends of the court. She is athletic and able to maneuver her way through traffic and find her way to the hoop. She runs the court, works to make herself available, and can sink shots from deep. On defense she was a menace, forcing bad shots and turnovers.

Blanca Thomas 2024   CP3 Flames 17U EYBL Morris
Blanca put in major work. She was constantly moving, making herself available to score or setting hard picks for her teammates. She battled inside and was a key rebounder. Blanca is tough and had no issues with showing it.

Tiara Thompson 2026   Carolina Flames Jr EYBL Chasten
Even at a young age, Tiara is showing that she is a natural leader. She is vocal, smart, and plays extremely hard. She has a high IQ, allowing her to make great passes and take great shots. On defense, she was good at reading the court and helping her teammates. She can go!

Brook Evans 2026   Carolina Flames Jr EYBL Chasten
Brook is the type of player that knows how to do a lot so she’s able to play multiple positions. She’s aggressive and a quick thinker, never shying away from physical play. She crashed the boards, got big rebounds, finished strong at the rim, and often beat everyone back on defense. She is fearless and it shows.

Annelise Castillo 2023    Fairfax Stars 17U Showcase
Annelise was the player that never stopped going, know matter what. She has a high motor and plays hard on both ends of the court. She had very active hands and feet, annoying her opponents but creating points for her team. She was a key part of the offense by scoring herself, getting the ball to the open man, or resetting the offense.

Leah Keyes 2025    Fairfax Stars 16U EYBL
With a wide wingspan and quick feet, Leah was able to be impactful offensively and on defense. She is tough and can jump, allowing her to help rebound, block shots, and shoot over defenders. She ran the court in transition, grabbing offensive rebounds for easy put-backs. She can get to the rim and make it count, even with some heavy contact.

Kiera Scott 2024    Fairfax Stars 17U
Kiera is a very versatile player that is an asset in the paint and on the perimeter. When on a fast break, she uses her long limbs to jump out ahead of the pack and make herself available for easy buckets or wide-open jumpers. She can post-up on smaller players and is effective facing or away from the basket. She can also defend in both areas and doesn’t mind getting physical.

Madison Dizayton 2027   FBC Queen City 14U
Being a good defender is very purposeful. It’s not one of those things that come naturally to most. Madison was one of the best defenders in the gym. She zones in and knows how to control the direction, speed, and decisions of the other player. She can take just as much as she gives, making great moves to finish strong in the paint with and without a hand in her face. Madison was all gas, no brakes.

Julika Cunningham 2026   FBC Queen City 14U
The most impressive thing about Julika for me was when she heard her coach yell “Get Big!” she would do just that. Grabbing rebounds despite a crowd in the paint, hitting layups in the post, getting back on defense, and disrupting fast breaks…she did it all. She can put the ball on the court and score off the bounce. She’s a hard-working player with a ton of potential.

Nyla Powell 2023   Lady Attack Elite ENC
Nyla’s ability to be ready to rebound and catch a dump-down pass from a teammate driving to the hole was impressive. Multiple possessions I watched her box, someone, out, but still catch a quick pass and hit the layup. Even in transition she ran the lanes and timed everything almost perfectly. She is also very effective off the pick and roll and a nice defender.

Caroline Thiel 2023  Carolina Flames 17U Nike-Moses
Caroline’s game is a combination of smoothness and toughness. On offense, she gets it done. When she turns the corner, she can get to the rim or stop and pop, hitting nothing but net. She’s not easily intimidated and will take it straight at her defender. On defense, she can get physical and goes to battle for rebounds and second chance points. She has a high motor and can play inside and on the perimeter.

Brianna Carelock 2026   NC Gems 2026
Brianna is a gritty floor leader that has an IQ higher than some of the high school players I watched this weekend. She has already learned some very important points of the game and it showed. She handles the ball well under pressure, head up, seeing the floor, and advancing the ball. She’s confident in her skill set and knew when her team needed her to create shots for herself and for them.

Oshauna Holland 2026   NC Gems 2026
Oshauna’s light stayed on green the entire game. She is incredibly athletic. She has a quick first step and an arsenal of crafty moves which makes for a great combination on offense. She got to the hoop! She did not force it though. She showed that she can be coached and that she understands the flow of the game. She also is a strong on the ball defender. She picked pockets all day long.