LBI Roundup: Michigan May Madness Final Round Up (Brighton, MI) 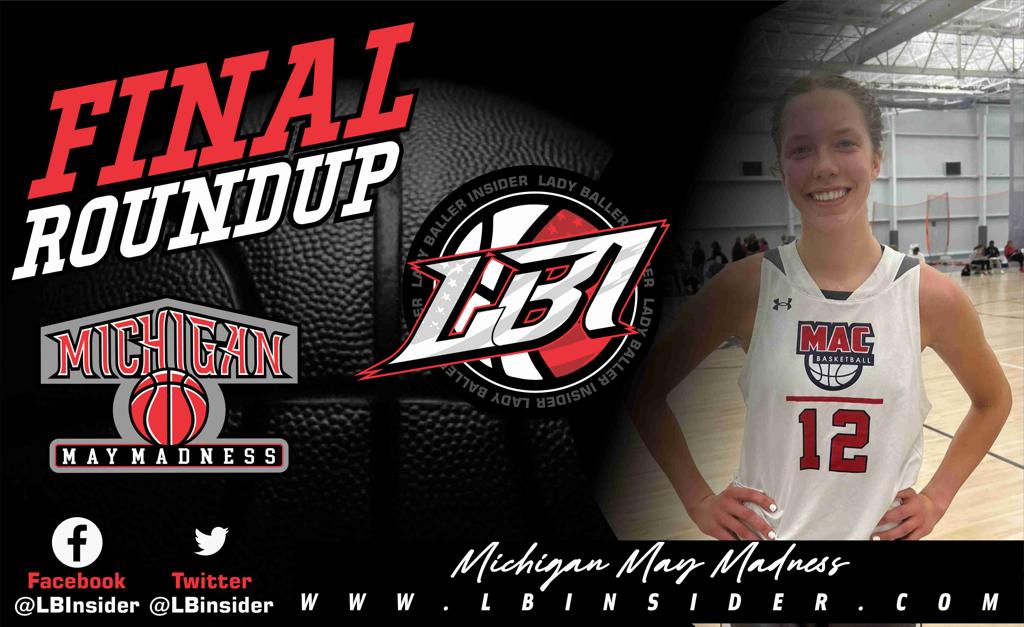 Brighton, MI: Day 2 and 3 and May Madness was loaded with big time games, packed baselines tough competition, and some players who made sure their name would be remembered.  The talent in the gym was plenty here are a few that took advantage of the stage.

Mary Meng Post 2023 MAC Basketball 2023
Mary had a good showing this weekend, using her length, great feet, and high basketball IQ to affect the game on both ends of the floor. She showed to be an aggressive rebounder and did a great job catching and finishing in the paint.

Mackenzie Schulz SF 2023 MAC Basketball 2023
Mackenzie as one coach mentioned ‘had a very consistent weekend’ she did a great job scoring the ball and making plays slashing to the hoop or knocking down the triples. Mackenzie is a ball of energy who did a great job moving without the ball and getting to her spots on the floor to score the rock.

Sophia Lance Guard 2024 MAC Basketball 2024
Sophia didn’t’ miss, well at least it seemed that way whenever the game got close. Using her sweet stroke and quick release, Sophia was unconscious hitting triples from all over, Sunday against the storm she hit five big ones to help seal the win.

Kennedy Blair Guard 2023 Michigan Storm 2023 GUAA
If Kennedy wasn’t on the coaches’ board on Friday? she just might have played her way on to a few this weekend. There were a few games where she was the best player on the floor, and with her smooth ability to break her defender down and score with the floater, the pull up, or in the post Kennedy showed her bag was deep.

Armoni Strozier Post 2023 Michigan Storm 2023 GUAA
A very physical, intimidating force on both ends of the floor, Armon is super tough defensively, protecting the paint, rebounding the basketball and using quick hands to force turnovers. She is very light on her feet and showed good footwork when she caught it down low. She is a game changer!!

Isabel Lindo Guard 2023 Michigan Mystics S40 2023
Isabel is a tough playmaking guard who uses her deceptive speed to make plays off the bounce or with the jump shot. Lindo was all over the floor impacting the game on both ends.

Megan McCalla SF 2023 Michigan Mystics S40 2023
Megan is a physical wing who scored the ball inside and out all week, showing she has extended range on the jumper and also is not afraid to mix it up down low for two. Megan was a matchup nightmare for her opponents.

Mya Nicholson Guard 2024 Wisconsin Purple Aces 2023
Mya had a good weekend hitting the three-ball and scoring the ball slashing to the basket and in the flow of the offense. In one game she hit three straight triples in consecutive possessions opening up the game for her squad. One of the coaches mentioned she was a new edition, well I would say that is a hell of a pick-up.

Gracie Grzesk Wing 2024 Wisconsin Purple Aces 2023
Gracie was one of the top producing players all weekend on ALL teams. She was a menace on D, she scored inside and out, rebounded at a high clip, and was an impossible cover. She took advantage of any matchup she was presented, if they put a guard on her she went to the post if they tried to play her with a big, she dominated them on the perimeter. Versatile is the best way to describe her.

Alayna Rocco Guard 2024 WPA Bruins 2023
Alayna had a great weekend for the Bruins, she is a very skilled, confident guard with nice length and a great feel for the game. Her strength is filling it up from deep but she wasn’t afraid to put the rock on the floor and make plays off the bounce.

Jasmyn Timmerson PG 2023 WPA Bruins
Jasmyn is no question PG1 for the bruins, she runs the show makes the right read and makes sure that her teammates get the ball in position to score. She is a tough defender who thrives in the open court but proved that she could also knock down the open jumper in the flow of the offense.

Janae Kent Guard 2023 Michigan Crossover EYBL
Janae playing with relaxed confidence of being an LSU commit looked comfortable stepping outside and hitting the 3 at a high clip. Kent already with a smooth ability to put the ball on the floor and attack the hoop adding the consistency of the 3-point shot makes her a scary cover for any defense.

Molly Deurloo Wing 2023 Michigan Pride
Molly is a hard-working, do it all guard that plays with a ton of energy and skill which is a great combo. She excels in transition and attacking the hoop and if there is a loose ball or rebound 9 times out of 10 she will come up with it. Molly is a coach’s dream and she played at a very high level all weekend.

Avery Depagter Wing 2024 West Michigan Drive 2024 S40
Avery is very good at a number of things on the floor and competitive fire just might be at the top. An elite athlete who affects the game in many different ways had her usual solid weekend of making plays with the ball or playing off the ball. She is physical on both ends of the floor and has a great feel for the game. Coaches you have been warned!!

Xamiya Walton Guard 2024 , Destiny Jackson Guard 2025, Aaliyah Guyton Guard 2024
These three are put together because this trio of guards together made the Fire the best team in the building all weekend. These guards put on a show. They penetrated, dished, and hit bombs from deep all while applying superb pressure on defense. Easily one of the most exciting teams to watch all weekend and these three High Major guards played a huge role in that title.

Lily Williams Post 2026 Michigan Mystics Dalton
Lily is a dominant force for a young age and she gets better every time I see her. She has always been a good rebounder but this weekend she was very aggressive and made sure she dominated on the boards. She was an intimidating factor on the defensive end and she did a great job catching the ball keeping it high and scoring in the paint. The Sky literally is the limit for young Lily, opponents are afraid as they should be!!

Mariah Sain Guard 2026 Michigan Crossover 15U EYBL
Mariah is an elite athlete that plays the game with high energy and at a high athletic level. She is aggressive in attacking the hoop off the bounce and is capable of knocking down the J when they back off.

Liv Linden 2023 Guard Michigan Mystics Finest 2023
Liv is a smooth guard that plays the game at her own pace, she never gets sped up, always in control, and is able to make plays off the bounce for her or a teammate. Liv showed all weekend great vision and an ability to shoot the rock at a high clip. Look for Liv to climb up some recruiting boards this summer.