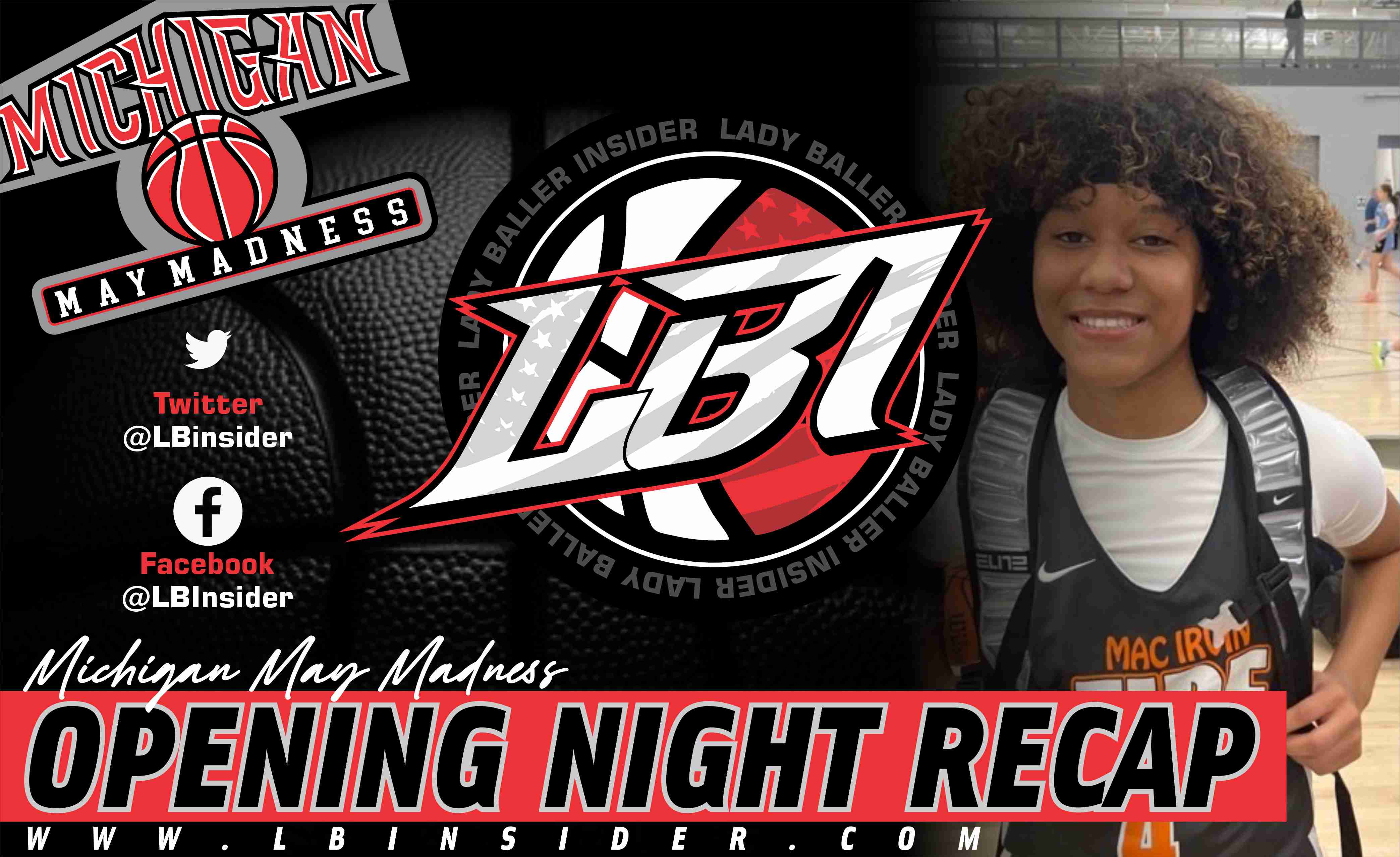 Brighton, MI: A fantastic opening night of the 2022 Michigan May Madness (NCAA Certified) saw the college coaching world take in some excellent action in the Mitten. Here’s a quick look at a handful of talented prospects that impressed many college coaches in attendance.

Isis Johnson Guard 2025 Michigan Crossover 15u EYBL
Isis is so smooth, as one coach said while watching “she is a cheat code and she’s not even sweating”. Isis glides, floats, and shakes her way over and around defenses, with her long arms and athletic ability she is almost impossible to slow down.

Molly Mcleod Guard 2025 Michigan Crossover 15U EYBL
Molly is a shooter and tonight she had that it clicking. In the last game of the evening, she hit four 3-point bombs in the first half ending with five total in a blowout win.

Maya Anderson Guard 2024 UTS Lady Elite 2023
Maya had a good evening showing off her ball handling, and ability to get to the rack finish or drop a nice dime to a teammate. Maya is a strong, physical guard who stayed aggressive on both ends of the floor.

Keira Roehm Guard 2026 Michigan Mystics Dalton Keira was balling tonight, she splashed some threes created off the bounce and showed off her ability to finish in traffic. She is a strong confident guard that when she has it rolling, she is hard to slow down.

Lily Zeinstra Guard 2024 West Michigan Drive
Lily showed she has the full package tonight. She provided her normal offensive production but also showed she can lock up on defense. She created havoc on the ball forcing turnovers, rebounding the rock, and getting her team out in transition.

Brooklyn Ingram Guard 2023 WPA Bruins
Brooklyn has all the shake and wiggle, she is smooth off the bounce and did a good job tonight being aggressive on both ends of the floor. She has a nice J and put together some tough combos to get her shot off.

Alexa Washington Guard 2023 WPA Bruins
Alexa is super clutch and showed it big time tonight. She hit big-time three after big-time three and showed just how nice she was in open court with some extremely tough moves in transition.

Trista Fayta Guard 2024 Wisconsin Purple Aces 17U
Trista is NICE, she has the rock on a string, drops dimes hits the jumper, and has a great feel for the game. There were a number of good guards on display in their game vs the Bruins and Fayta was definitely one of the best.

Dekota Smith Guard 2023 Michigan Storm UAA
Dekota Smith had complete control of the games on both ends of the floor tonight. She has a great feel for the game, and a high basketball IQ and she made some big-time plays off the bounce either scoring or feeding her teammates. Defensively she caused havoc on the ball or jumping the passing lanes leading to transition buckets.

Mac Irvine Fire Godfather 17U squad
The Fire was on FIRE tonight, the 17u squad put on an absolute shooting and defensive clinic in a blow-out victory. Jones, Jackson, Walton, and Guyton led the team in scoring but they all got a piece of this dub.  Best team I watched all night!!!

Michigan Storm Elite 2023 GUAA
If any college coach needs good versatile post players, you should be sitting on any court that Michigan Storm 2023 GUAA squad is playing on. Armoni Strozier, Maya White, Janae Tyler, and Kayla Covington were a handful all night long as they scored at will and controlled the boards in picking up two wins over the West Michigan Drive and UTS Elite which featured Ohio State commit Faith Carson. Coach Shane Lawal does a great job of utilizing his post players in various ways which makes them tough to stop.