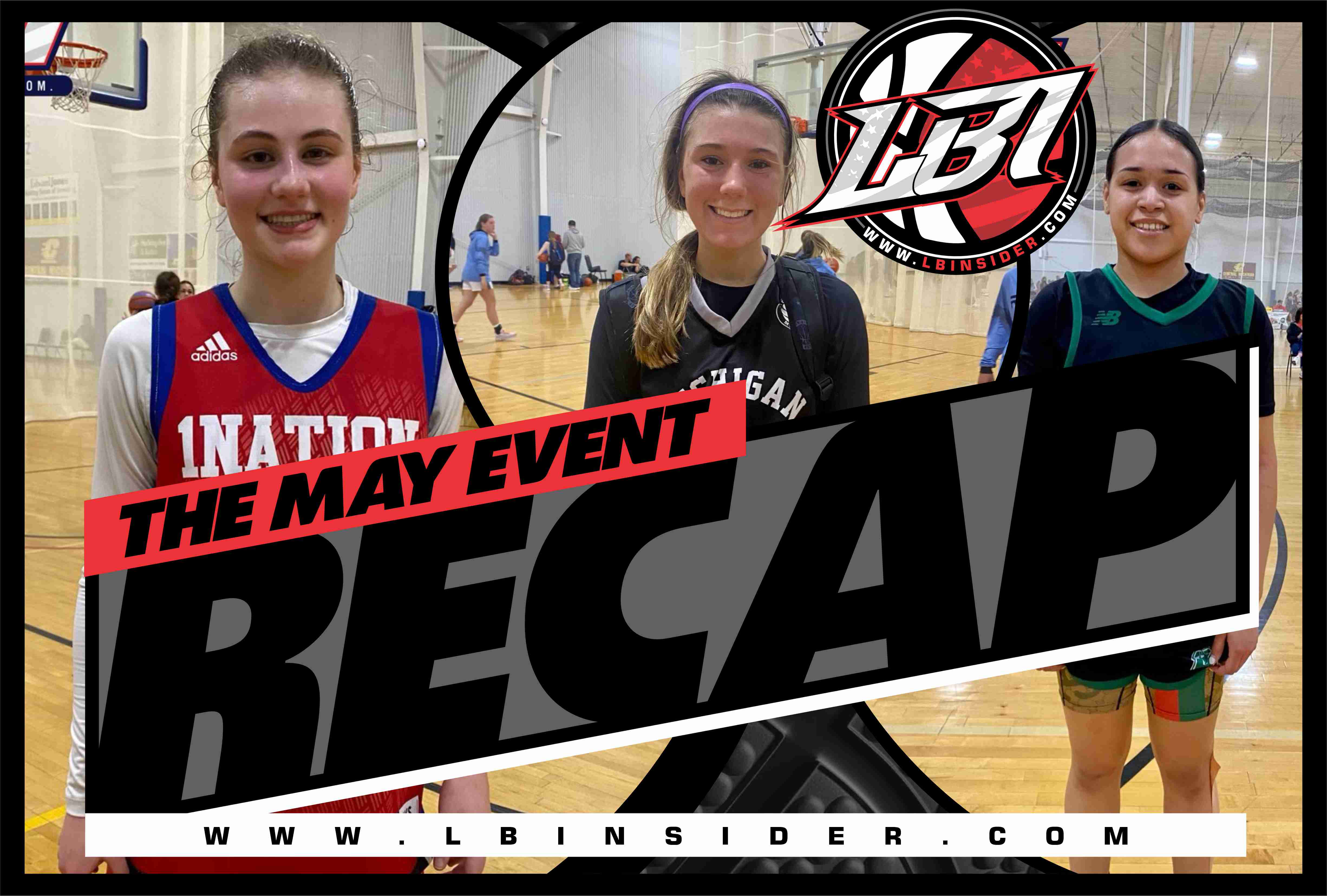 Mt. Pleasant, MI – Another busy weekend in the world of travel basketball. This weekend LBI was on the move, and one of our stops was Mt. Pleasant, MI, to cover The May Event. Teams from Michigan, Illinois, and Ohio brought their A-Game to the gym for two days full of fun and great competition. There was some solid and exciting young talent in the building. Congratulations to all the teams that took home the championship in their divisions.

HERE ARE A FEW STANDOUTS…

Lily Gortmaker 2025 MBA UA Rise 2025
A tough and gritty guard who was not afraid to take a little contact, Lily’s impact on the game was much bigger than the points that she scored, even though those were pretty game-changing. She is a solid defender and did a good job playing off the ball and intercepting some passes. She has a high motor, and you can see it on her face; she wants to win.

Cara Obande 2025 MBA UA Rise 2025
One of the best defensive players in the gym, Cara was a key component in her team, winning a very tight game against a very athletic opponent. She did a good job of forcing the ball to the side of the court, where she had the most help, and maximizing the opportunity. She finished strong at the rim and drooped some nice passes, too.

Demi Bolton 2025 1 Nation 3SSSB 15U
Demi is quick, athletic, and relentless. She was a key contributor on both ends of the court. She has active hands and feet, which helped her get some big defensive stops. She also can score in multiple ways. Demi played hard every possession and never gave up. I look forward to watching her game develop. She has a ton of potential.

McKenzie Nelson 2025 1 Nation 3SSSB 15U
McKenzie was the player that stepped up big when the other team least expected it. She made some solid plays that resulted in her driving to the hoop and getting well-earned baskets. She did a fantastic job of choosing when to score and when to do other things, which always flowed perfectly with her team’s offensive flow. She was a big rebounder as well.

Demaya Asberry 2025 1 Nation 3SSSB 15U
Demaya was aggressive offensively and an excellent on-the-ball defender. She kept her composure the entire game while under pressure and in clutch moments. Peyton’s floor leadership was evident in her ability to control the offense's tempo, make smart decisions with the ball, and find the open man.

Morgan Rose 2024 Dayton Lady Hoopstars BSTTJL 16 Elite
Morgan is a scrappy and tough guard who showed no mercy on both ends of the court. She was great at bullying her way to the hoop against smaller defenders and lighting up the perimeter against bigger ones. She has great court awareness and knows how to get her teammates pumped up and playing hard.

Victoria Mescher 2025 Dayton Lady Hoopstars BSTTJL 16 Elite
With a long stretch and nice moves inside, Victoria played much bigger than she is. She was a dominant force on the boards, getting some big offensive boards and second chance points. Using her long reach, she altered and blocked shots on a regular. She did a good job of running the floor in transition.

Owynn Evans 2025 MI Vice 2025
I love a clean-up/hard working player, which is exactly what Owynn is. She did a great job defending a much bigger player in the post and playing awesome help defense. She worked hard for rebounds and loose balls and worked hard to get some nice buckets.

Taylor Wagner 2025 Dayton Lady Hoopstars 15U Black
Taylor was a huge force inside. She did a nice job of establishing her position in the post early, never giving the defense a real chance to properly defend her. She was one of the top rebounders on the court consistently. She handled a lot of contact and still managed to put the ball in the basket.

Nadia Custeicean 2025 Dayton Lady Hoopstars 15U Black
Nadia is a shooter, that’s for sure. She was able to knock down some big threes from deep in a very close game. A few of those shots included a hand in her face. Nadia didn’t use all of her energy knocking down shots from behind the arc, and she was able to give her team some nice help on defense as well.

Mia McLaughin 2024 MI Mystics S40-2024
Mia had an awesome all-around game. She stepped up and hit some big shots when needed but also passed the ball and got her team involved. Her presence on defense was undeniable and a huge boost to some offensive runs, including grabbing some rebounds. She can shoot from deep and get to the basket. Mia did it all.

Alison Bisballe 2024 MI Mystics S40-2024
Working hard without the ball to make herself available to score, Alison scored when it mattered most. She did an excellent job of reading the defense and setting picks to offer some relief to her backcourt. She crashed the boards hard and took advantage of the easy second chance points.

Caty Carney 2024 IL Lady Lighting Premier 16U
Showing great court vision while advancing the ball for easy points, Caty was a floor general. Although she was able to dish some nice passes, she knew when to take over and score as well. She hit big shots off the bounce and finished at the rim with contact. She never forced anything. Caty is a solid defender that got some big stops and helped shift the game’s momentum.

Claire Murphy 2025 IL Lady Lighting Premier 16U
Claire was an inside force that was hard to matchup against. She was great at moving without the ball and making herself available. Claire was able to put the ball on the floor and beat her opponent off the dribble, finishing with and without some heavy contact. Rebounding and altering shots were also a part of Claire’s contributions.

Sophia Wozniak 2024 W. MI Drive BSTTJL 2024
An athletic guard with an arsenal of crafty moves, Sophia’s main objective was to get to the ball in the basket, regardless of whether it came from her or her teammates. She did a nice job of seeing the court, reading the defense, and knowing when to get the offense moving and when to attack. She’s vocal on both ends, and her presence definitely changed the tempo of the game.

Anyieth Nhial 2024 MBA Robinson (2024)
Anyieth is athletic with a long wingspan and quick feet on defense. She was instrumental in kick starting her team’s offense by being aggressive and attacking the rim. She also hit some deep threes to give her team more firepower. She utilizes those long arms on defense, playing the lanes and breaking up passes.

Maggie Kelderman 2024 MBA Robinson (2024)
A superb defender, Maggie was not afraid to take or give a little contact. She is a scrappy player, always fighting for loose balls and diving out of bounds for a save. She played her part in getting the score up, driving to the rim, and getting a few old fashion threes.

Clara Groen 2026 Michigan Factory 2026
A hardnose player with a lot to give, Clara did whatever her team needed her to do. She played the point guard position, went to the hoop and scored, made some nice passes, and got some huge stops on defense. She never seemed to get tired and played extremely hard every minute she was on the court.

McKinsey Berlin 2027 Michigan Factory 2026
She may be young, but McKinsey knows what to do on the pick and roll. She consistently executed the play perfectly, resulting in easy layups and trips to the free throw line. She never forced it and even would kick the ball back out to reset the play. McKinsey was nice on the boards and blocked a few shots.

Wren Nelson 2024 W. MI Drive BSTTJL 2024
Calling the paint home, Wren was a presence that you just could not ignore. She is strong and able to rebound in and out of her area, not being affected by a lot of contact. She did a good job of turning and seeing the court before making a decision to kick it back out or make a nice move to score.