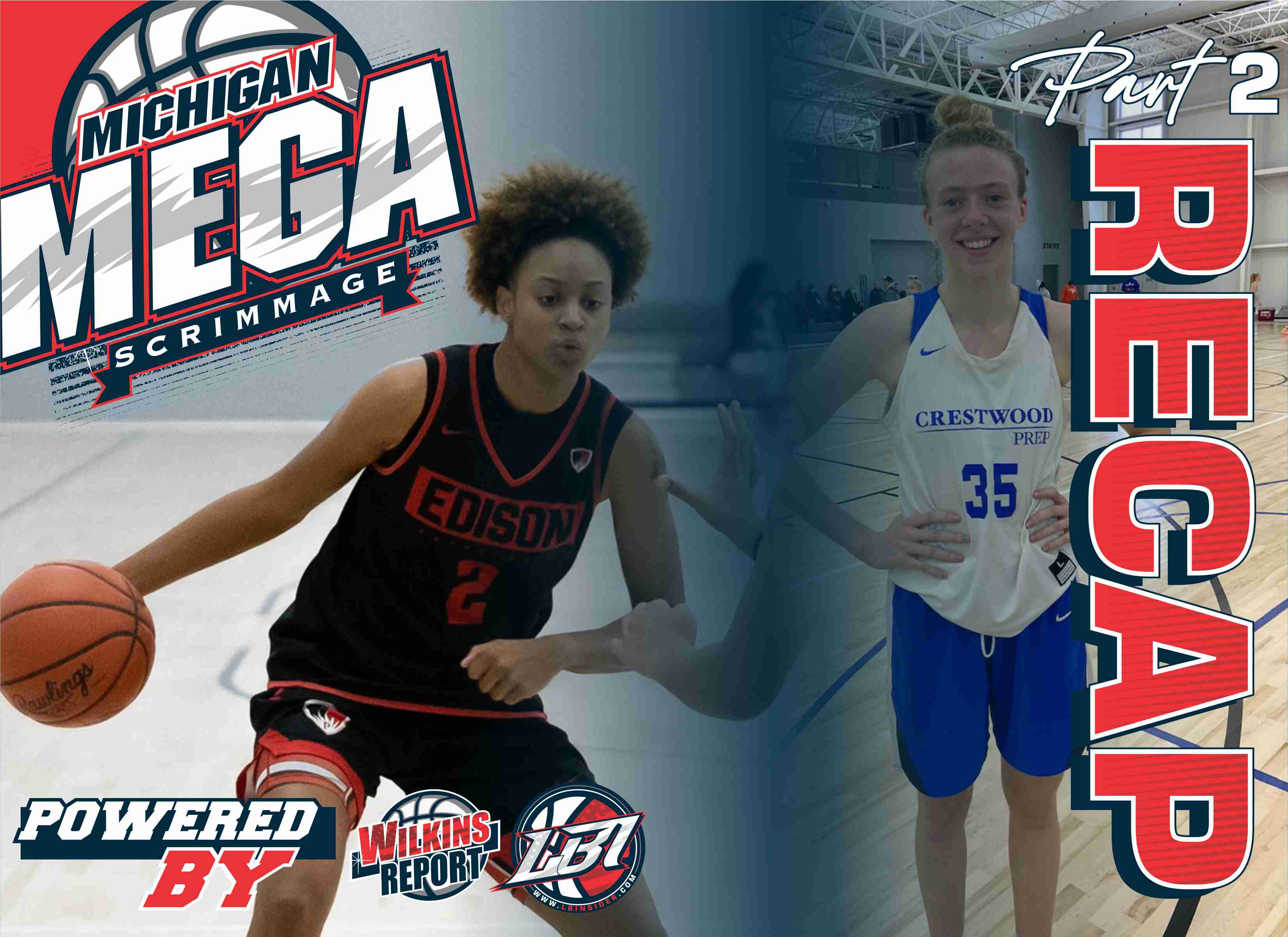 Brighton, MI: There were some great players I watched at the Michigan Mega Scrimmage here are some of the top underclassmen that stood out.

Dakota Alston 2023 Guard Detroit Edison
Dakota, a tough defender makes so many plays in transition off of her defensive pressure and her aggressive mindset. Look for Dakota to be a big-time bucket getter in the DEPSA high powered offense with her sweet lefty stroke and her ability to get to the rack.

Anaya Billups 2024 Wing Detroit Edison
Anaya has arguably the most upside of any 2024 in the state. A super athletic wing that can shoot it from deep and make plays off the bounce. She has great length and plays the game with a boat load of confidence.

NA Brea Lane 2024 Forward Detroit Edison
NA Brea is a very tough physical defender that plays defense at an extremely high level and looks to love mixing it up grabbing boards and getting at every loose ball. All coaches would sign up for a player like this she is the glue and big piece to the DEPSA dynasty.

NA’Kiya Bonner 2024 PG Detroit Edison
When Bonner is locked in it’s a wrap for all defenders trying to keep her out the lane. She has an extremely smooth handle with the ability to drop a sweet dime, get a bucket or make a fundamental play to set up a teammate. A gym rat, Bonner has gotten better every time I see her and this weekend was no different. Watch out Michigan, DEPSA has another star!!!!

Chloe Perry 2023 SG Dexter
Chloe has a nice handle with a deceptively quick first step that allows for her to make plays for herself or her teammates. Look for her to have a huge year on a Dexter team that looks ready to compete for an SEC championship this year.

Jada Bedeiko 2023 Center Southwest Academy CA
Jada is a big-time post presence for the Academy on both ends of the floor. She rebounded the ball at a high level, blocked and altered shots, and scored of paint touches and put backs. It was a good day for Bedeiko.

Da’Mya Boles 2025 Wing Toledo Rogers
Another big-time prospect in the long line of big-time players at Rogers. Da’Mya shows great poise and a smooth ability to handle the rock, get to the basket and score the ball playing downhill. Boles already has a great feel for the game and will only get better as she enters her first High school season.

Kate Stemmer 2024 Guard Saline
Kate had a nice day shooting the ball at a high clip and making a number of plays off the dribble for her squad. Kate looks like she has been putting in a lot of work in the gym since the summer, she showed a great feel for the game and was one of the best players on the floor in all of her team’s matchups today. Big year ahead for Stemmer.

Maddy Benard 2025 PG Grosse Point South
I dare you to watch Maddy play and not think that it is crazy that she has not played a game in High School yet! Maddy plays the game well beyond her years, she handles the ball runs the team, and sees the floor like a vet and that’s not even what she does best. Maddy is a “Bucket” she scores the ball all over the floor and seems to get better every time I see her. I don’t know what the scoring record is at South but Benard will be in the conversation when it’s all said and done!

Christian Sanders 2024 PG Detroit Renaissance
If every player played the game as hard as Christian all coaches would be able to sleep at night. Sanders goes hard on both ends of the floor applying great ball pressure on defense and being very aggressive on offense attacking the basket and making plays. I love Sanders energy as she will be the leader for the young and talented Pheonix squad this year.

Hannah Pricco 2023 SG Lansing Catholic
Hannah is sweet off the bounce she has a great first step and has a crafty ability to finish at the rim with both hands. On a loaded Lansing Catholic squad look for her to put up big numbers when teams try to defend her one on one.

Anna Richards 2024 Combo Guard Lansing Catholic
Anna is the real deal, she has great length, great vision the ability to either run the team or to get buckets. She is great at slashing to the hoop or shooting the J from deep, Anna has developed the full package and she is only getting better.

Gabby Halliwill 2024 PG Lansing Catholic
Gabby has the ability to be one of the best PG's in her class in the state of Michigan if she isn’t already??? Gabby has an outstanding handle, she is a great passer and has the ability to hit the jumper off the bounce or in the flow of the offense. Gabby plays with a high level of confidence with the ball and looks to be a big piece in the championship run for Lansing catholic.

Molly Deurloo 2023 Guard Howell
Molly is the energizer bunny when she is on the floor. This young lady plays 100% non-stop every minute. Add her work ethic to her ability to score the rocks, handle the rock, and make plays and you have one of the top players in her class. Molly may not have all the flair of some of the top players in the state but her toughness and grittiness separate’s her from others. As a coach of this game, I would take a MOLLY DEURLOO every day of the week.

Sophie Daugard 2023 Guard Howell
Sophie does it all for her Howell squad, she defends at a very high level, rebounds the ball, and makes plays in transition. For Howell to reach the heights that they have planned for their program look for Sophie to be a big part of their success.

Toby Fournier 2024 Forward Crestwood Prep
Easily the best one game performance of the day Toby did it all vs DEPSA, dominating on both ends of the floor, scoring the ball, leading all scorers, rebounding the ball, dropping dimes, and making high-level defensive plays. Toby was one of the best players regardless of class today and she continued her high level of play all day. Coaches if you are not familiar with her, check her out it will be well worth it!

Taija Sta, Maria 2023 Guard Crestwood Prep
Very nice off the bounce, Maria was elusive, hard to guard and she made plays getting to the rack and knocking down the J. She was the perfect floor general for her loaded squad setting up her teammates and setting the tone defensively with her ball pressure.

Summer Lee 2023 Guard Crestwood Prep
Summer is the glue for her loaded squad, she made every play her team needed and she showed the ability to guard 1 through 5. Summer is a strong physical guard with nice ball skill.

Indya Davis 2024 Guard West Bloomfield
Indya showed why she is considered one of the top 2024 players in the state. She is so smooth in every part of the game, she gets to the basket, hits the perimeter shot, and plays with great poise and an outstanding feel for the game. What also separates her from other top players is her ability to lock up and bring big time energy on defense. West Bloomfield is highly regarded in the state and Indya is one of the main reasons why.