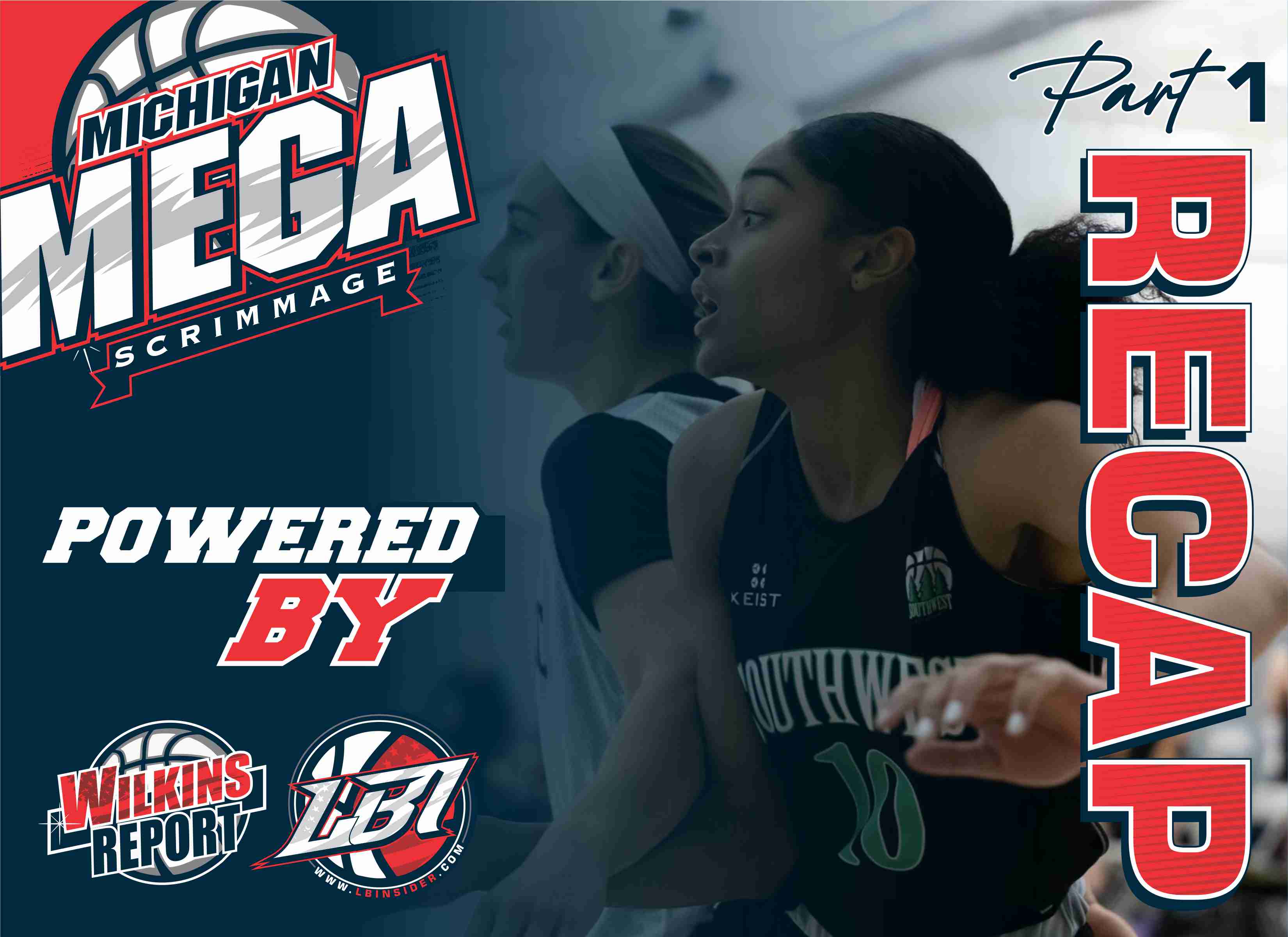 Brighton, MI – One of the state’s top pre-season events that everyone loves to attend was put on pause due to the COVID-19 pandemic. Yesterday, LBI welcomed everyone back to the gym, and it was an amazing experience. Not only did high schools from all over the state roll into the Legacy Sports Complex parking lot, but a few of our neighbors to the south (Ohio) and our international neighbors from the north (Canada) showed up as well. The competition was tense, and we loved every minute of it. Although their time is almost up, the upperclassmen showed that they are indeed still here and ready for action!

Mary Lengemann 2023 Imlay City HS
Mary is a if it needs to be done, I’ll do it type of player. She pushed the ball in transition, often getting to the hoop for the finish. She crashed the boards for rebounds. She knocked down shots from deep and in the paint. She’s a playmaker, which included getting big defensive stops and turning them into points.

Olivia Livingston 2023 Imlay City HS
The energy and tenacity that Olivia showed in every game were undeniable. She has a high motor that allows her to play great on the ball defense possession after possession. She is tough, diving for loose balls and even out of bounds into the crowd to gain possession for her team. She helped the offense flow and was able to create shots for herself and others.

Jess Andrews 2022 Brighton HS
Jess is a flat-out hooper. She displayed a variety of moves to free herself from defenders and get to the rim. She can score!. Her court vision and basketball IQ are top tier. She fed the hot hand, spotted the open man, and created scoring opportunities by reading the defense and finding the gaps. Jess can shoot from deep and will do just that if she’s left open.

Sarah Ebel 2022 Brighton HS
A versatile player who showed her strength in multiple positions, Sarah was an energy source for her team, often making big plays to help swing the game's momentum back in their favor. She used her strength to dominate in the post, positioning herself to call for the ball and score, and grab rebounds, too. She is a threat on the perimeter as well, knocking down threes and playing good defense.

Ashley Hill 2022 Divine Child HS
Ashley showed up when her team needed her, doing all the little things and making great basketball plays that led to points on the score clock. She can handle the ball under pressure, never panicking and keeping a calm demeanor. Ashley can knock down long distance shots and drop dimes in traffic.

Tamia Tounsel 2022 Macomb Dakota HS
Fresh off an injury, Tamia showed that she can still hoop. She is a hustle player, never giving up on a play until it's over. She battled inside on the boards, often against bigger and stronger players, winning the rebound war. On offense, she maneuvered her way in the paint, finishing at the rim or drawing the foul.

Hannah Toutant 2022 Macomb Dakota HS
Hannah was a solid and undeniable presence in the middle. She was very active, moving well without the ball, and positioning herself to score. She ran the court well in transition, collecting easy points by knocking down open layups or rebounds for second chance points. She handled a lot of contact, showing her toughness and resiliency.

Alexa Kolnitys 2022 Midland Dow HS
Alexa handled the ball well under pressure and in traffic. She made some great moves to get herself open and to the basket. She is smart and knows when to score and when to kick it an open teammate. She’s a strong floor leader, directing the offensive flow even when she didn’t have the ball.

Abby Rey 2022 Midland Dow HS
A player that shows up under pressure, Abby was great at keeping her cool in tight situations. She also did a great job of keeping her team focused when they were up big. She made good basketball plays in multiple situations. Abby showed her post moves, stepped out to the perimeter and knocked down threes, and pushed the ball coast to coast in transition.

Madison Morson 2024 Plymouth Salem HS
Madison has a high motor, playing very hard, every game, on every possession. She has a wide wingspan and extended reach that she used to her advantage on defense. She used her athleticism to get to the rim for easy shots. She wasn’t afraid to put the ball in the air from behind the arc either, knocking down some deep threes for her team.

Lauren Gunn 2022 Saginaw Heritage HS
Lauren was impressive throughout the entire session. She has strong ball-handling skills that enabled her to create shots for herself and others. She is a playmaker. She knows how to get the defense backpedaling and go to the rim. She is also a sharp-shooter, sinking four deep three-point shots in one game alone.

Zar’ria Mitchell 2023 Saginaw Heritage HS
Zar’ria was a lot of fun to watch. She is athletic, able to put the ball on the floor, see the court, and make solid decisions with minimal turnovers. She is quick, using her speed to play great on the ball defense and get past defenders with ease. When a defender made the mistake of giving her some space, Zar’ria sank some deep shots from the perimeter.

Sophie Cook 2022 Williamston HS
Sophie is a vocal floor leader with excellent court vision, high energy, and toughness. Her presence was felt on both ends. The game flowed differently when she wasn’t in the game, showing her floor leadership and game shifting abilities. She’s an intelligent player with tons of tenacity. She knows how to get her teammates involved or score when she needs to.

Rylan Buschell 2025 Belleville HS
Rylan showed solid on the ball pressure without committing a ton of fouls, and she has great anticipation instincts. On offense, she handled the point guard position well, keeping the offense flowing, finding the open man, and making moves to get to the rim when she needed to. She has a nice upside and will definitely be making a name for herself this season.

Aniyah Stone-Palmer 2023 Belleville HS
Aniyah plays much bigger than she is. She is a workhorse, battling inside and on the boards consistently. She showed her ability to score in multiple ways. Aniyah never backed down and was a key factor in every game.

Avery Zeinstra 2022 Byron Center HS
Avery was always the floor general and energy source for her team, always working hard on offense and defense. She has an excellent game IQ, reads the floor, and makes great decisions. She is a scorer but didn’t force anything. Her shot selection was smart and on-point. On defense, she used her long stretch to play the defensive lanes, intercepting and deflecting passes.

McKenna Ferguson 2023 Byron Center HS
A scrappy player that does not mind getting dirty for her team to win, McKenna was everywhere but in a good way. She has great timing, and it showed the most on the defensive end. She plays great help defense, forcing bad passes and unwanted shots. She worked her way inside the lane on offense and drew in defenders to create easy shots for others.

Taryn Jackson 2024 Lowell HS
An active and vocal leader, Taryn played smart and with a lot of energy. She was great at applying significant pressure on the ball, forcing multiple turnovers. She has a high motor and never seems to slow down or get tired. She can score and in numerous ways.

Macy Brown 2023 East Grand Rapids HS
Macy is a game changer. She did just about everything on both ends of the court. She is a playmaker with the ability to go on a scoring run and give her team the momentum of the game. She can knock down threes from deep and do so consistently. She sees the court and does a great job of attacking gaps and not forcing bad shots. On the defensive end, she was able to stay in front of her man without excessive fouls.

Arrionna Williams 2022 Reeths-Puffer HS
Arrionna is a tough and gritty guard that has a high motor. She is a floor general, taking charge when she needed to and keeping her teammates active and involved. She has quick hands and feet, making her a defensive pest to her opponents. She did an excellent job of seeing the court and advancing the ball in transition.

Davai Matthews 2022 Wayne Memorial HS
Strong, finishing at the rim with and without contact Davai was one of the most dominant post players of the day. Once she planted her feet and established her position, there was no moving her. She ran the court in transition making herself available for easy buckets. She can jump, getting high above other players to snatch rebounds and dominate the boards.

Mayla Ham 2023 Wayne Memorial HS
Long and athletic, Mya was a force on both ends of the court. She works hard and a key piece to her team’s success. She can score, using her length to keep the ball high and stretch out over defenders. She has quick feet and can get low on defense, enabling her to get stops and alter shots. She is relentless, never giving up on a possession, including fighting in the paint for rebounds.