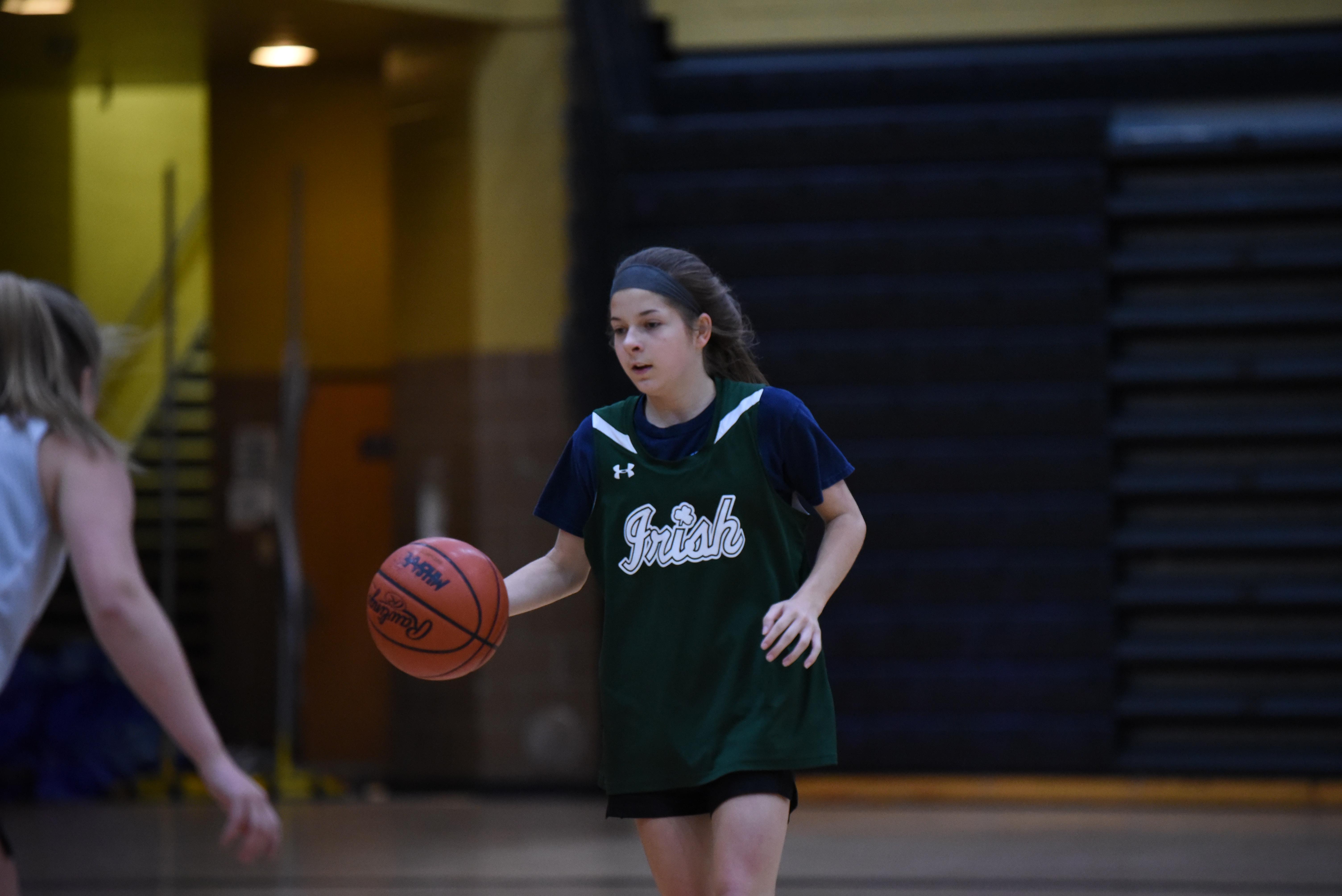 Ypsilanti, MI: The Wilkins Summer League kicked off today with some good teams and a lot of good players. Today we had a game end in sudden death, some games won down the stretch and plenty of exciting highlights.

Jordan Wright Ann Arbor Huron Guard 2022
Jordan has a very nice handle, the vision, and court awareness to be a very effective PG, she did a great job tonight in dropping dimes and getting her teammates involved!

Amelia Storm Howell HS Forward 2022
Amelia showed a lot of skill and toughness tonight, showing some elite footwork and soft touch in the paint but making most of her noise at the front of the press using her quick hands and quick feet to force turnovers and convert them for two in transition. Amelia is also a very capable passer and a solid rebounder who is not afraid to mix it up.

Makenna Clement Lake Fenton HS Forward 2023
Makayla showed that she can get it done inside and out today, she scored in the paint, created shots off the dribble, set up her teammates for easy baskets, and ran the floor scoring in transition.

Hillary Griffin Parma Western HS Guard 2022
Hillary has a very smooth game, she was able to get to her spots on the floor with a nice handle and the ability to create shots in traffic. Hillary has a very high basketball IQ and she seemed to make the right play each possession.

Alyna Lewis Parma Western HS Point Guard 2022
Alyna is deceptively quick and athletic and she packages that with a smooth handle which allows for her to get free and make plays for her or her teammates. Alyna has great control of the game and she plays at her own pace not allowing the defense to speed her up.

Harmony Wiley Romulus Summit HS Guard 2022
Harmony is a long athletic wing that was aggressive getting to the rack and making plays, Harmony also uses her length to cover a lot of ground on defense and forced quite a few turnovers turning them into buckets.

Amaya Smith Lake Fenton HS Guard 2024
Amaya is a BUCKET…….Amaya scored in so many ways today it was fun to watch. She pumped faked, she pulled up in transition she created off the dribble you name it Amaya had it going. Amaya played super aggressive but always under control which is tough to do but Amaya made it look easy.

Davai Matthews Wayne Memorial Center 2022
Davai did a great job today, not only keeping up with the fast pace style of play but running the floor establishing great post position, and scoring in the paint. She showed the jump hook, the drop step and she hit open shooters when double teamed. She also worked hard to rebound at a high clip.

Mayla Ham Wayne Memorial HS Guard 2023
Mayla was all over the floor today working extremely hard in the press forcing turnovers and getting buckets in transition. She also displayed her ability to handle the rock and get to the rack or hit the J when they were forced to back up off of her. Mayla plays 100% every possession.

Maeve St John Howell HS Guard 2022
The summer is for getting better and working on your game and Maeve is doing just that. Every time she steps on the court Maeve just seems to keep getting better today she still showed that she was a bucket but she also showed her playmaking and ball handling ability weaving through the press and either dropping a dime or getting to the basket herself. I’m going to say it again Northwood got a steal on this one, this girl can go!!!

Arbor Prep: Their pressure and the ability to shoot it is crazy, their leader Mya Petticord is so good they will always be in the game. Went 1-0 today.

Parma Western: They play very well together and they have the pieces to hurt you in many ways. Went 2-0 today.

Ava Rodriguez Gabriel Richard HS Guard 2026
Watching Ava, you lose track of her age because she can do so much so well, her biggest strength might be scoring the rock. Ava is aggressive going to the rack and shooting the J. It’s scary to think she is so young and that she has a sister (Vanessa) that is sitting out right now, one is tough two is down-right scary.

Kendall Smith Lake Fenton PG 2026
The definition of a true PG, Kendall runs the show like a vet and is in complete control of the game on both ends of the floor. Kendall is an extension of the coach on the floor and her leadership skills already are so good it’s easy to forget she is so young.  She could run any team I am a part of!

Jayla Jackson Wayne Memorial Guard 2026
Already sitting on a power five offer, Jayla is the “TRUTH”, playing all the way up and against a very good Arbor Prep team, Jayla did more than hold her own with her handle, her wiggle with the rock, and her ability to drop dimes and get buckets Jayla fit right in on the Varsity level. Jayla doesn’t have next, she’s got NOW!!!!

Kate Starky Grass Lake HS Guard 2025
Kate makes up for being small in stature by being super aggressive looking to attack offensively, playing off of Lexi Bargesser she is ready and willing to let it fly when she gets an opening. Today she also showed that she can put it on the floor and score in traffic. Look for Kate to have a big role in the Grass lake offense this year.

Rylan Buschell Belleville HS PG 2025
Rylan is so smooth with the rock, she never gets rattled and she has complete control of the show. Rylan very rarely turns the ball over and her Basketball IQ is off the charts. Look for Rylan to continue to have a big summer improving and carry that momentum into the regular high school season. Belleville has their 4-year point guard!!!!