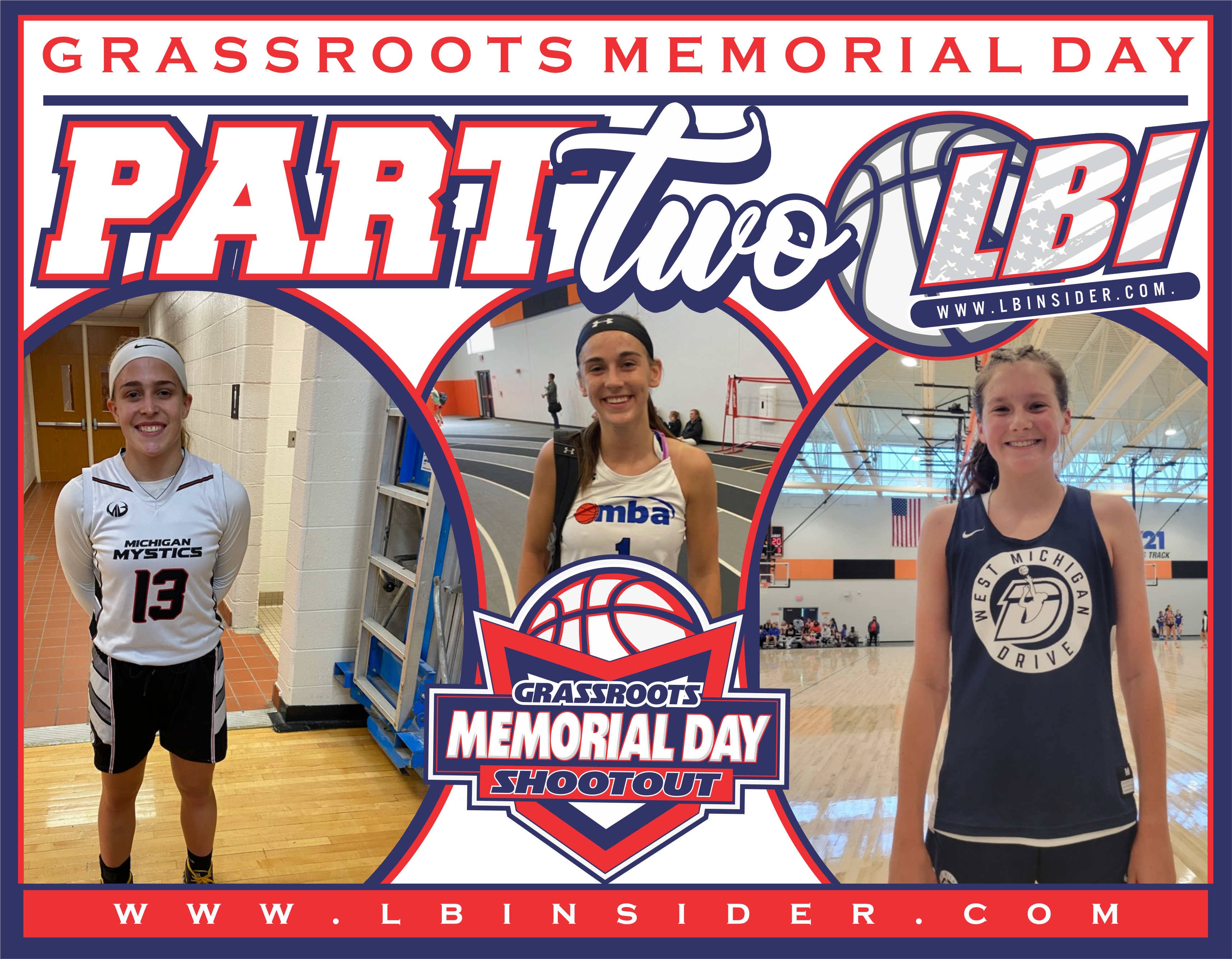 Warsaw, IN - The Grassroots Memorial Day Shootout was the place to be for Memorial Day weekend. The event featured hundreds of talented teams from different states competing at the highest level. Teams brought their A-game and came to play on this beautiful weekend! There were lots of entertaining games featuring blowouts and those that came down to the wire. Here are a few notable performances on the weekend.

Jazelle Young 2023 | Mac Irvin Lady Fire
Jazelle is a super athletic smooth wing that was effective slashing to the basket and getting buckets off the dribble. Young showed nice footwork in the paint and a few times she got it off the board and led the break sometimes going coast to coast.

Abbey Kemball 2022 | MBA 2022 Rise
Not seeing Abbey play in about two years I was excited to see how her game had changed and right out the gate she didn’t disappoint. Abby created off the dribble, slashed to the hoop, dropped a couple of sweet dimes, played physical defense oh and knocked down a smooth 4 threes in the first half of their first game of the tournament. MSU should be happy they are getting a good one!

Alli Carlson 2022 |  MBA 2022 Rise
Alli, a WMU commit had the whole package on display today as a super quick PG, she dictated the flow of the game with her outstanding handle, pinpoint passes, and elite vision weaving through the pressure finding her teammates for easy buckets. After continuously setting the table she decided to eat herself in the 2nd half by getting to the rim for buckets and knocking down 3 3s from deep.

Tessa Towers 2022 |  M14 Hoops Blue Star
Tessa displayed some nice footwork and a smooth touch around the basket Saturday she did a great job of establishing post position and usually scored when she got it, she was also a tough defensive presence in the middle.

Zamiya Walton 2024 | Mac Irvin Lady Fire Godfather
Had the J clicking this weekend knocking down threes off the dribble, stand still with a hand in her face it didn’t matter. Walton has a pretty shot and knows how to move to get open. Walton is a tough hard-nosed defender who makes a lot of plays that led to transition points for her squad. Look for a big July for this lights-out shooter.

Liv Linden 2023 | Michigan Mystics Hightower
Liv is a smooth operator, she did pretty much everything in the game I caught today. She knocked down the three, showed a smooth handle, and maybe the best part of her game was the dimes she was dropping to teammates right in stride for a bucket. My first time seeing Linden I was very impressed!!

Kaelyn Flowers 2024 | Team B Wright 2024 UAA
Kaelyn definitely has some wiggle to her game with the handle and the shake she got anywhere she wanted on the floor. Kaelyn has a smooth handle and she consistently broke her defenders down off the dribble for a bucket or a nice drop to a teammate.

Brooke Daniels 2022 | Michigan Crossover 17U EYBL
Brooke was all over the floor per usual today, her crossover squad was in a back and forth game in the first half until Brooke does what she does. Tough gritty defense, forcing turnovers, scoring in transition, and getting her hand on every loose ball Brooke took over the game and when I looked up they were up 20 and continued to run away with an easy victory. Brooke is what we affectionately call a BEAST covering the ball on defense she never lets up. Daniels continued her outstanding play on Sunday with a number of deflections, offensive rebounds, and just flat out gritty effort to keep plays alive for her Crossover squad.

Kenzie Hare 2022 | M14 Hoops Blue Star
Kenzie, the SLU commit has a sweet shot and showed supreme confidence letting it go with success all weekend. Hare is not just a shooter as she also showed her ability to put it on the floor and make plays for herself or a teammate off the dribble.

Lenee Beaumont 2022 | M14 Hoops Blue Star
Beaumont is super nice off the dribble with the swag and the handle to be very effective on the floor. She showed a good all-around floor game and definitely showed why she received an offer from the Rockets this week.

Angie Smith 2024 | Mac Irvin Lady Fire
Angie is listed as a guard but I would not put her into a box of one position because she does EVERYTHING for her team. She is always one of the toughest girls on the floor no matter who the opponent is and the list of things you can see her do during a game is unbelievable. She handles the rock, slashes for buckets, scores in the post, consistently out rebounds girls taller than her, and maybe the best thing she does is sits down and causes so much havoc on defense. Angie Smith is nothing to play with!

Brooklyn Gray 2022 | Example Sports GUAA
Brooklyn was nice with it this weekend, she had the full arsenal going the games I watched, she knocked down the J threw some nice dimes, and beat her defender off the dribble getting to the rack to make plays. Brooklyn also showed her passion to compete while her team was getting beat handily and the game was pretty much out of reach she was still battling and fighting for on both ends of the floor until the final buzzer sounded.

Tadessa Brown 2022 | Michigan Crossover 17U EYBL
Tadessa gets better and better every time I see her play. She has good touch around the basket, good footwork and she rebounds the basketball with authority. The biggest improvement I have seen recently is her ability to make a difference on the defensive end with her presence and ability to alter shots.

Kennise Johnson-Etienne 2023 | Example Sports UAA
This young lady is super quick and super smooth, she’s got the rock on a string and she loves to make plays off the dribble. Kennise is definitely the engine that makes her high-powered squad go. The floor general and one of the defensive leaders, she seemed to make the right play all weekend with of course a little shake and bake to go with it.

Madisyn Saracco 2023 | Example Sports UAA
Maddy just makes you write about her every time you see her play. She always plays on full tilt giving great effort on both ends of the floor, but this weekend she was extra aggressive scoring the rock, and a few games she went off. One game with her team down she calmly knocked down 4 straight threes from deep to give her team a chance to win the game. In another game I watched she slashed and drove at will for buckets or a nice dime to a teammate. Look for the offers to come in bunches this summer if she keeps up this type of play.

Ayanna Jackson 2023 | Example Sports UAA
College coaches allow me to introduce you to Ayanna Jackson, she can shoot the three she makes the 15- footer and she has a great presence in the paint. She rebounds at a high clip and she is aggressive defensively protecting the interior.  The ceiling is high for this 6’1 2023 Stretch 4.

Megan McCalla 2023 | Michigan Mystics C-High
Megan has a very nice inside-out game scoring easily with a soft touch and great footwork in the paint she also adds the ability to hit the 3 and the mid-range shot which makes her a hard cover. Megan has a high basketball IQ and you can tell she loves to compete, in a big-time game vs Example sports UAA, she scored 17 points holding off a late charge to help her team get the win. Look for a big summer for McCalla and her Mystic squad.

Megan Henager 2023 | Team B Wright 2023 UAA
The saying is shooters shoot and Megan can shoot that thing. In a big-time semi-final game vs the Crossover, Megan knocked down 3’s on pin downs, in transition, in the flow of the offense, it didn’t matter if she got a glimpse of the rim and an inch of day light it was going up and usually in. Henager is a big-time next level shooter.

Mckenzie Swanson 2024 |Michigan Crossover EYBL 15U
Mckenzie is going to be nice -nice, she already displays excellent footwork has a great feel for the game and she showed a nice touch around the basket. Mckenzie also showed her maturity in the post by drawing the double team and hitting the open teammate for the shot. After a nice weekend, she ended the tournament with 25 pts and 14 boards. Swanson will be a fixture on college coaches big board for the next 3 years!!!

Joirdyn Smith 2024 | Always 100 Elite 3SSB
Joirdyn showed her complete game this weekend locking up on D knocking down the 3 and also handling the rock to set up her teammates. Joirdyn is a physical guard that is aggressive on both ends of the floor applying pressure to the ball handler and attacking the paint on O.  When the three ball is falling the way that it was in the Semi-final win vs the crossover she is hard to deal with.

Lily Zeinstra 2024 | West Michigan Drive Copeland
Lily is so smooth, she is long and extremely smart on both ends of the floor, she impacts the game in so many ways but her ability to score, lead and play at her own pace this young is special. In a big-time win vs Always 100 Paul, Lily at a very smooth pace scored 26 points and had 10 boards to lead her Drive squad. Already holding 4 offers look for that list to grow this summer

Future so bright they don’t even need light……..

Nikki Kerstein 2025 | Mac Irvin Lady Fire
Nikki playing all the way up on the 17u squad shows some flashes of what the future holds for her. A tough scrappy defender with a sick handle and enough wiggle and the ability to not only get off her shot but knock down the 3 from deep when they back up off of her. Stay tuned for Kerstein, she’s got next!!!

Kendall Smith 2026 | Michigan Mystics Smith
Kendall will be around for a long time making it miserable for all opposing coaches and players. A very high IQ PG, Kendall showed maturity beyond her years with her leadership, ability to run the show, and her amazing handle. In the game, I watched Kendall hit bombs from deep, dropped some sweet passes to her teammates and remained under control, and didn’t allow herself to get sped up while facing pressure. This young lady definitely has NEXT!!

Lilly Williams 2026 | Michigan Mystics Smith
Lilly is already on her way to being a very special 4/5 for the class of 2026. She displayed nice footwork, a soft touch, and worked hard to rebound the basketball all great traits for a young big.  AAU is a guard dominant game and it usually takes the post players time to actually get touches but Lilly will be a force to be reckoned with for years to come. SHE GOT NEXT!!

Sydney Savoury 2027 | Michigan Mystics Smith
WOW, that is what I said when I found out how old Sidney was. Playing the game well beyond her years, Sydney stood out immediately with her ability to affect the game with her defense, her basketball IQ, her ability to slash hit the J, dominate the boards and play with an aggressiveness that you cant teach. This young lady will be on every coach's board for many years to come. Sydney Savoury Most definitely have NEXT!