LBI Round Up: Grassroots Memorial Day Classic Part One (Warsaw, IN) 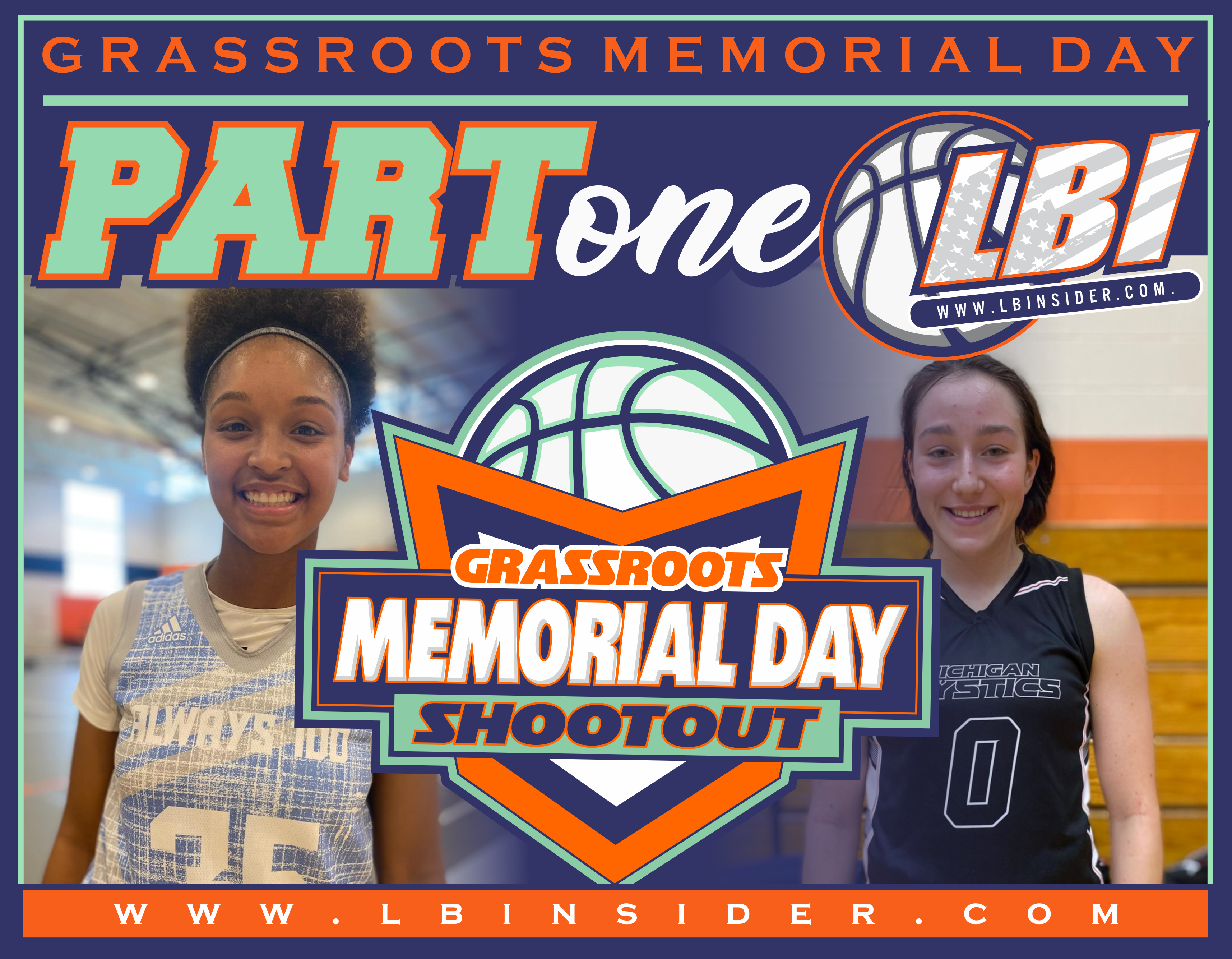 Warsaw, IN - In traditional pre-Memorial Day fashion, teams from all over the Midwest rolled into Warsaw, IN to face off at the Grassroot Memorial Day Classic. It's always great to see some of the familiar faces on the court, showing that they've been working on their game and how good they have gotten. It's also refreshing to see new faces on the court, as the young lady ballers battle to claim their place amongst the region's best. Each day was packed with some tough losses, intense match-ups, and dominating blow-outs. Here are a few (and we do mean a few) of the dynamic players we were privileged to watch this weekend.

Sydney Savoury 2027 | MI Mystics Smith
Sydney is the total package. She has a nice frame that allows her to play multiple positions and play them well.  Her anticipation on defense is on another level, allowing her to perfectly play the passing lanes and get multiple steals. Sydney rebounds consistently and has a nice short range shot that she sinks with ease.

Jacelyn Starks 2024 | Always 100 Takeover 2024
A defensive nuisance, Jacelyn had active hands and quick feet that opponents did not like to see coming. She is fast with and without the ball in her hands. She was patient, allowing the game to come to her and not forcing shots. She was very effective once she got in the paint. She always had two or more options.

Lilly Williams  2026 | MI Mystics Smith
Long, athletic, with a high basketball IQ, Lilly was beyond impressive. She knows how to roll to the basket for easy buckets. She can rebound in and out of her area and has great timing. She is a shot block expert, clearing shots left and right without fouling.

Carrington Jones 2024  | Team B Wright 2024 UAA Rise
Athletic, quick, and unstoppable at the rim are just a few characteristics of this lady baller. She turns the corner strong and finds her way to the rim, where she finishes strong. Even when she has several hands slapping on her. She has a high motor and plays hard every minute. Carrington played solid defense and helped her team get some big stops.

Ambria Ferkany 2024  | Team B Wright 2024 UAA Rise
Ambria is a vocal floor general that did a great job of controlling her team’s offensive tempo. She congratulated her teammates when they did well and helped them to make adjustments with encouragement. She plays with a chip on her shoulder, never backing down from a challenge on either end of the court. Ambria was great at applying on the ball pressure during critical moments in the game.

Sienna Wolfe 2026 | MI Mystics Smith
Shooter alert!! One thing that is for sure about Sienna is that she can set the nets on fire from long range. She knocked down shots off the bounce and with her feet set after coming off a pick. She did a great job of relocating and making herself available. In one game, she found a way to knock down five 3-pointers. Sienna does a pretty nice job on the defensive end as well.

Kenya Fairs 2024 | Team B Wright UAA
Kenya was not the laydown and settle for defeat type of player. Every possession she played extremely hard, never giving up on the play. She made some nice moves to create scoring opportunities for herself. She either finished at the rim or knocked down a twelve-foot jump shot. She is quick which helped her stay in front of her man rather easily on defense.

Mia McGregor 2026 | MI Mystics Smith
A floor general that has great court vision, Mia was almost always on point with her passes. She knows how to feed the inside and dish the perfect lead pass to the basket. She is a thinker and made great decisions with the ball. On defense, her on the ball coverage was on point. She knows how to snatch the cookie from the cookie jar without committing a foul.

Annie Buisson 2024 | Team B Wright UAA
Annie is a tough, feisty guard that does not mind getting a little dirty. On defense, she is vocal with active hands which created turnovers for the other team. She can shoot from deep and without warning. Annie makes an impact on the game the moment she steps on the court.

Hope Overweg 2024 | MI Premier White
An undeniable presence on the inside, Hope snagged down hard fought for rebounds and took advantage of second chance points. Overall, she made great decisions on the offensive and utilized good footwork to get open. She has a lot of potential to be a great player at the next level.

Amelia Scorsone   2023 | The Zone
Big time players show up in the clutch. That is exactly what Amelia did. After dominating the paint for almost the entire game, she muscled her way to the basket and hit the game-winning bucket. She is a strong rebounder and can put the ball on the floor and drive if she needs to.

Liv Linden 2023 | MI Mystics Hightower
Advancing the ball quickly up the court, Liv showed that she can assess the defense and make great decisions. Her passing skills are top notch. She often was able to thread the needle and get the ball to a cutting teammate in the midst of a crowd. She locks in on defense, causing some key turnovers in tight games. Liv is a shooter! She makes you pay for leaving her open.

Abby Drendel 2023 | M14 Hoops 16U Blue Star
Kenya was not the laydown and settle for defeat type of player. Every possession she played extremely hard, never giving up on the play. She made some nice moves to create scoring opportunities for herself. She either finished at the rim or knocked down a twelve-foot jump shot. She is quick which helped her stay in front of her man rather easily on defense.

Layla Henderson 2023 | M14 Hoops 16u Blue Star
Giving 100% on every possession, Layla was one of the hardest working players on the court. She is tough and goes after every loose ball. She battles on the boards for rebounds and easy putbacks. She ran the court well during transition fast-breaks and made herself available to score. She was a strong defender. Very scrappy, never backing down.

Mary Copple 2023 | MI Mystics Hightower
Mary was the go-to person for ger team. She impacted the game in several ways. She is a scorer, making great shot selections and never forcing anything. She has great court vision and was good and getting the ball where it needed to be. Mary also played well in the halfcourt set, setting some solid and strong picks to free up her teammates. She is a vocal leader and was consistently an energy source.

Sydney Vis 2022  | West MI Drive 2022 BSTTL
Sydney is strong, tough, and can shoot the lights out of the gym. In a tough game, she showed just how relentless she is. A perimeter player, she has the size and strength to battle inside and defend if she needs to. Her shot is pure and she can knock it down from deep and off the dribble.

Theryn Hallock  2022 | MBA 2022 UAA Rise
Theryn is a vocal leader that has a nice basketball IQ. She was awesome at directing traffic and feeding the open player. She is a dynamic passer, seeing scoring opportunities that most don’t. She took care of the ball; hardly any turnovers and being smart with her shots. On defense, she used her long stretch to play the passing lanes and disrupt the other team’s flow.

Destini Craig  2024 | All 100 Elite 2024 3SSB
When it seemed as though her team was running out of steam, Destini dug deep and pulled out her second wind. She was directly or indirectly responsible for 12 consecutive points, all a part of a 16-4 run by her team. She made some crucial defensive stops and sank the game closing free throws. Destini showed how much of a leader and clutch player she really is.