LBI Round Up; Michigan May Madness Championship Day (Brighton, MI) 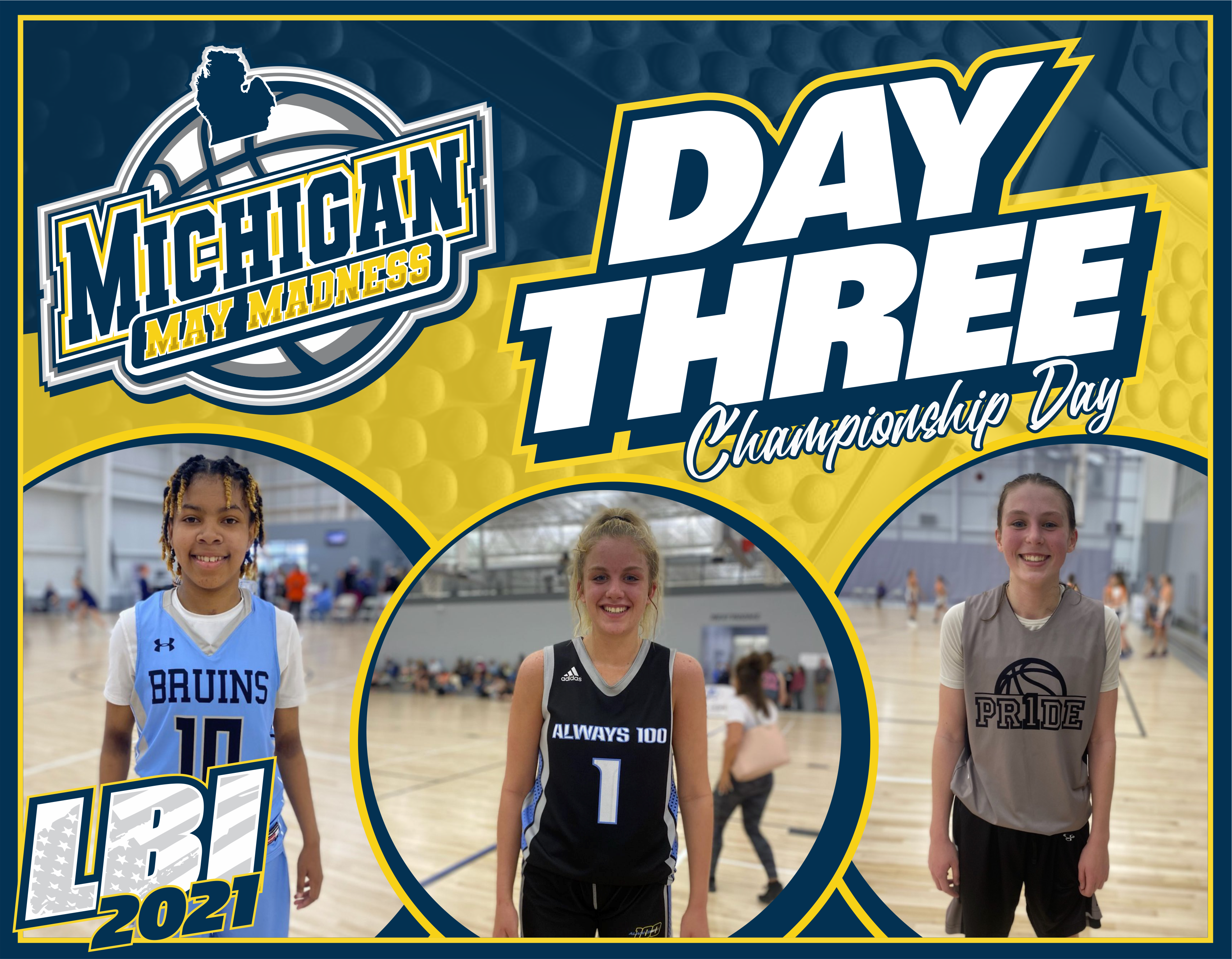 Anytime the top teams in a tournament face off the intensity level and the environment feels like it's a championship game whether it is or not. Fortunately for us…it was. Michigan Crossover jumped out to an early lead, opening the game with air-tight man defense, challenging every shot the Lady Fire attempted, and finishing strong in transition. Once the Lady Fire settled down and found their rhythm, we had a game on our hands. Skylar Jones (2023) helped to kick start the Lady Fire’s run with some athletic plays at the rim and big-time long-range three-ball. Tahj Bloom (2024) was a beast on the boards and made some big-time plays as well, playing very physical in the paint. In the second half, Crossover made adjustments and stepped their game up a notch. ESPN top 50 player Ruby Whitehorn (2022) showed why her name rings bells across the country. Her athleticism was on full display, getting some huge defensive stops and immediately converting them into points on the board. She had her way around the rim. Her teammates matched her energy and effort, going on a 12-3 run and pushing their lead to double digits. In spite of fighting hard and sinking some beautiful shots both behind the arc and in the paint, the Lady Fire were unable to get over the hump. MI Crossover would go on to defeat Mac Irvin Lady Fire 54-43 and claim the Super Platinum 17u championship.

Katie Puletti  2024 | MAC Basketball 2024
Shooting from all over the court and consistently hitting big shots was the theme for Katie. She was on fire from the perimeter, knocking down six three-pointers in one game alone. She also showed that she can score on the run and in transition. Katie is the type of player that will do major damage quickly if you’re not paying attention.

Angie Smith 2024  | Mac Irvin Lady Fire-Godfather
Angie is a tough and gritty player that does not mind doing whatever it takes to help her team win. She is aggressive on both ends, showing lots of heart and no fear. Her court vision is high, spotting cutter heading towards the rim, dropping great passes left and right. She knows how to create offensive plays and when needed finish them, too.

Maeve St. John 2022 | Pride 2022
Maeve is a hooper. That is all. If you have seen her play before, then you know that first sentence is all you need to describe her. She has an arsenal of moves to free herself from defenders. She can score at will. Her release is quick and her shot is pure, hitting nothing but the bottom of the net. In the semi-final game, she knocked down six deep threes in spite of playing almost the entire game. (Northwood Commit)

Alexis Castator 2024 | Always 100 Paul 2024
A versatile player on offensive and defense, Alexis is comfortable and very effective in positions 1-3. She showed that she can bring the ball up and run the offense, run off a screen and knock down shots, and body smaller players for easy shots around the rim. She is long and quick, able to defend smaller guards but also has the power to battle on the inside. Big players step up in big moments and that’s exactly what Alexis did. In an overtime championship thriller, Alexis gave her team 28 points and a victory.

Morgan Bruno 2024 | Mac Irvin Lady Fire (2024)
While competing in a serious battle for the championship, Morgan showed that she is clutch under pressure. The game was fast-paced, physical, and tense, but Morgan was the calm in the storm. She was an assassin behind the arc, sinking five threes at some very critical moments. Morgan also played solid defense and helped her team get some big stops.

Iyanna Wade 2025 | WPA Bruins 8th
Iyana is a superb on the ball defender. When she locked in, there wasn’t anyone that could get past her and her opponents often found themselves no longer in possession of the ball. She picked pockets and played the lanes, intercepting passes and creating turnovers. Her quickness and energy was apparent on the offensive end as well. Her first step is quick and she knows how to get to the rim.

Brooke Daniels 2022 | MI Crossover 17U EYBL
Brooke is a solid and gritty defender that can take give contact with the best. She makes things very uncomfortable for the person she was defending and it showed. She created mental frustration that left talented players rattled and completely off their game. She can take as much as she gives, finishing some exciting plays strong at the rim.

2022 Gwenn Rogozonski | Michigan Premier Gold 17U
Straight from her Prom Dress to getting Buckets, Gwenn who celebrated her school prom Saturday night showed up to the gym today tired from a long night of fun but you couldn’t tell by watching her play. She got hot early and stayed hot knocking down 5 triples and when they closed out on her she put it on the floor and got to the rack for two.  All in all, she was all over the floor scoring 23 points in her team’s victory and I’m sure she will sleep well tonight

2023 Abigail Rouse | Always 100 Prime
Abigail had a very good weekend running the show for her squad. She was a threat with the rock attacking off the dribble, knocking down the open three, and setting up her teammates for buckets.

2022 Alyna Lewis | Michigan Premier Gold
Alyna has a great feel for the game and a very nice handle that allows her to get to her spots on the floor to make plays. Today she made some big plays on and off the ball and even though she is smaller in stature she came up with some big rebounds and some 50/50 balls down the stretch in her team's big victory over O3.

2024 Reese Wisniewiski  | Michigan Mystics Holt
Reese is an extremely tough, long defender who causes havoc to her opponents by jumping the passing lane and pressuring the ball. She is deceptively quick and does a lot of her damage in transition attacking the basket off the dribble. Reese was up to her old tricks today forcing turnovers and running the floor for her Mystic squad.

2024 Caroline Knight | Michigan Mystics Holt
Caroline scores from all over the floor she has an effective handle and when she plays downhill it’s pretty hard to slow her down. Caroline got hot today and scored a quick 8 points in the 2nd half to help seal the victory for her Mystic squad.

2021 Alex Long  | Cagers
Alex a smart and savvy guard does a great job of making the right play for her squad. Today she realized that her team needed her to take over and she did just that. A lay-in, a triple, and then an and-one finish, Alex had taken over and given her team the lead in a tough back and forth contest vs Mac Irvin Fire. All weekend long Alex was a key piece on both ends of the floor for the Cagers during their great run to the championship game.

2025 Jaslynn Ward | West Michigan Drive 14U
Jaslynn had her game clicking today against a tough crossover team, she scored in many ways, knocking down shots from the outside and getting to the rack, a super quick, strong guard Jazzy as her teammates call her was getting it done.

2025 Rylan Buschell | Michigan Crossover Black
Very smart, extremely poised point guard for her age. Rylan has it on a string and she’s in complete control when she has the rock in her hand. The future is very bright for this young lady as she already seems to have the point guard game figured out and looks to be in line to be one of the next top Michigan Crossover guards.

2025 Anayya Davis | Michigan Crossover Black
Anayya plays with great energy and a nice feel for the game. She aggressively goes after every rebound and looks to make plays when she touches it in the post.  Anayya is long, athletic and already knows how to use both to her advantage on offensive and defense.  I see a very bright future ahead for Miss Davis.

2022 Tanila Marshall | Mac Irving Lady Fire
Tanila is a long wing with an extremely aggressive bounce who gets to the basket with ease.  Tanila broke her defender down off the dribble regularly to either get to the basket herself or create for a teammate. Her aggressiveness in going to the rack drew a foul in the sudden death of the E-H championship game which she calmly stepped to the free-throw line and won it for her Mac Irvine Lady fire squad.