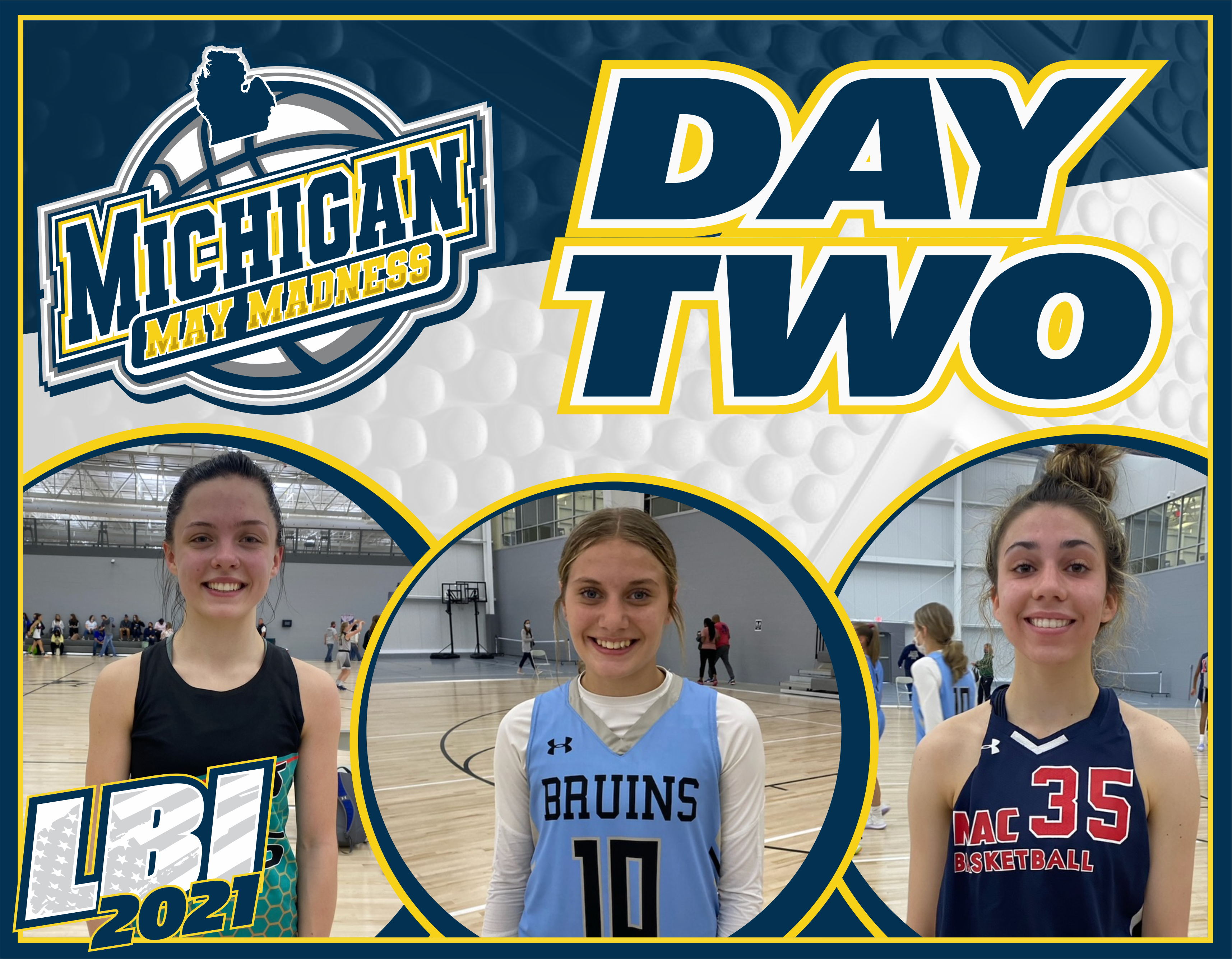 Brighton, MI: Day 2 of Michigan May Madness continued on Saturday at the beautiful eight-court Legacy Center in Brighton, MI. Here's a look at some of the top performers from Day 2.

Sarah Rekowski 2025 | Bates Fundamental
Sarah was a confident force on the block, taking her time and make great decisions. She was amazing at making sure that she was at the right place, at the right time to make big plays. She is a committed rebounder, which led to game-changing second chance point opportunities. Sarah flowed with her teammates, moving accordingly with the offensive flow. Her strong and steady play was a key component to her team’s chemistry.

Taylor Woodruff 2023 | WPA Bruins 10th Degregorio
True ballers don’t dwell on the plays that don’t go their way, they just keep playing and create ones that do!  That’s exactly what Taylor did after missing a fast-break layup. She quickly shook it off and stepped her game up. Her never say never attitude led to 2 steals, an assist, and an and-1 for herself, all in the last 1:30 of the game. Her relentless play help fuel a huge comeback for her team and ultimately seal the victory. (LM)

Chichi Vitti 2023 | Factory 2023 Orange
In a tough game against a tough team, Chichi played her heart out until the very last second. She drove to the basket and drew the defense to her; where she either shot the ball and got the foul, or dished it to a teammate. Regardless of the outcome, she worked very hard to make it all happen. Giving up was not in her vocabulary.

Sophia Hekkema 2023 | Grand Rapids Storm UA 2023
Sophia is one of those “Energizer” players. You know, the ones that play extremely hard and you think they are going to get tired but they do? She played every possession as if she were down by one when in reality her team was up by 20. She knows how to work to get open and can finish strong if she gets the ball.

Eriona Neal 2023 | WPA Bruins 10th Degregorio
Eriona was a key piece to a 12-4 run for her team that ultimately gave her team the win. She is strong and knows it. She uses her bully-type ways to plow through the paint and get to the bucket. She was able to read the defense and attack the gaps on several possessions.

Elise Bender 2025 | Bates Fundamentals
Watching her play it was hard to confirm that Elise was younger than her teammates. She is a complete player. She can score, especially once she gets side the paint. She has a nice basketball IQ and made great plays not only for herself but her teammates as well. She is a natural leader and it shows. On defense, she plays the passing lanes well, which created several turnovers and steals for her.

Komara Sylvester 2024 | Bates Fundamental
A natural floor leader, Komara did a great of running the team’s offense and making great decisions with the ball. She is a solid scrappy defender and never backed down from a challenge. Her quick first step was tough to contain on either end. Komara showed a lot of energy but was never rattled or in desperation mode.

Kendall Braaten 2023 | MAC Basketball 2022
Kendall showed some very impressive moves that enabled her to shake off her defensive opponent and knock down some easy buckets. She used her voice often to direct traffic and make sure her teammates were in the correct place. On defense, she had no problem applying major pressure to the primary ball-handler, even when they didn’t have the ball.

Jayzeelle Young 2023 | Mac Irvin Lady Fire
Jayzelle was one of the hardest working players on the court in every game. Her presence could not be denied on either end. She is a high-powered player that made big splashes throughout the day. She does what needs to be done. Rebounding, scoring, diving for loose balls, and even giving out a little contact to shake things up.

Jaci Tubergen 2022 | Grand Rapids Storm UA 2022
Jaci is undeniably a shooter. In one game she knocked down 5 threes, 4 of them were in the first half. All of them were from deep and one with a hand right in her face. She was amazing at relocating and making herself open. Once the defense locked in and figured out that she was a sharpshooter, Jaci then showed us another component of her game. Her ability to make some great moves, get to the rim and finish.

Mahogany Cottingham 2023  | MAC Basketball 2023
Mahogany is a tough quiet storm that was never afraid to get in the mix and be aggressive on either end of the court. She gave a glimpse of her game IG by knowing when to get involved offensively and when to feed the hot hand. Her on-the-ball defense was impressive and very much needed. Her motor is high and so is her upside.

Sydney Hendrix 2023 | Michigan Crossover 16U EYBL
A dominant force everywhere on the court, Sydney was phenomenal! Her ability to read the defense with her back to the rim and facing it was amazing. Her footwork in the paint and ability to score at will set her apart from everyone else on the court right away. Sydney was a lot of fun to watch.

Mallory Daly 2024 | WPA Bruins 9th Rocco GUAA
Mallory took pride in defense, getting real close and personal with whomever she was guarding. The eyes and look on her face appeared a though she was trash-talking without saying a word. They seem to be saying “I’ll take that” and that is exactly what she did on multiple possessions. She was showcased her catalog of moves as she navigated through traffic to get to the rim or get the ball to her open teammate.

Jayd Hovey 2022 | Grand Rapids Storm UA 2022
Reading the defense and hitting the gaps to create easy shots was on repeat for Jayd today. She found a way to get the best shot for her team every time she touched the basketball. She is a quick thinker and made solid decisions on the fly. She has a nice stutter step and once she puts the ball on the court, Jayd is tough to stop.

Kyndra Sheets 2024 | Always 100 Paul 2024
One of the toughest kids on the court, Kyndra played aggressively on offense and defense. She is a true point guard, impacting the game with and without the ball in her hands. She has a lot of energy and uses it to get to the basket to finish tough shots. She works hard every minute that she is on the court, showing no mercy or fear.

Olivia Bussell 2022  |  Michigan Mystics Showtime
Feisty with a high motor and a lot of heart, Olivia was the biggest small player on the court. She did not care who or how many were standing in front of the rim, she was going to figure out a way to get there. She did a great job running sets and being vocal with her teammates. She has high endurance. Olivia played a lot of minutes but never seemed to get fatigued. The few beaks she did take, you could tell she was no longer in the game.