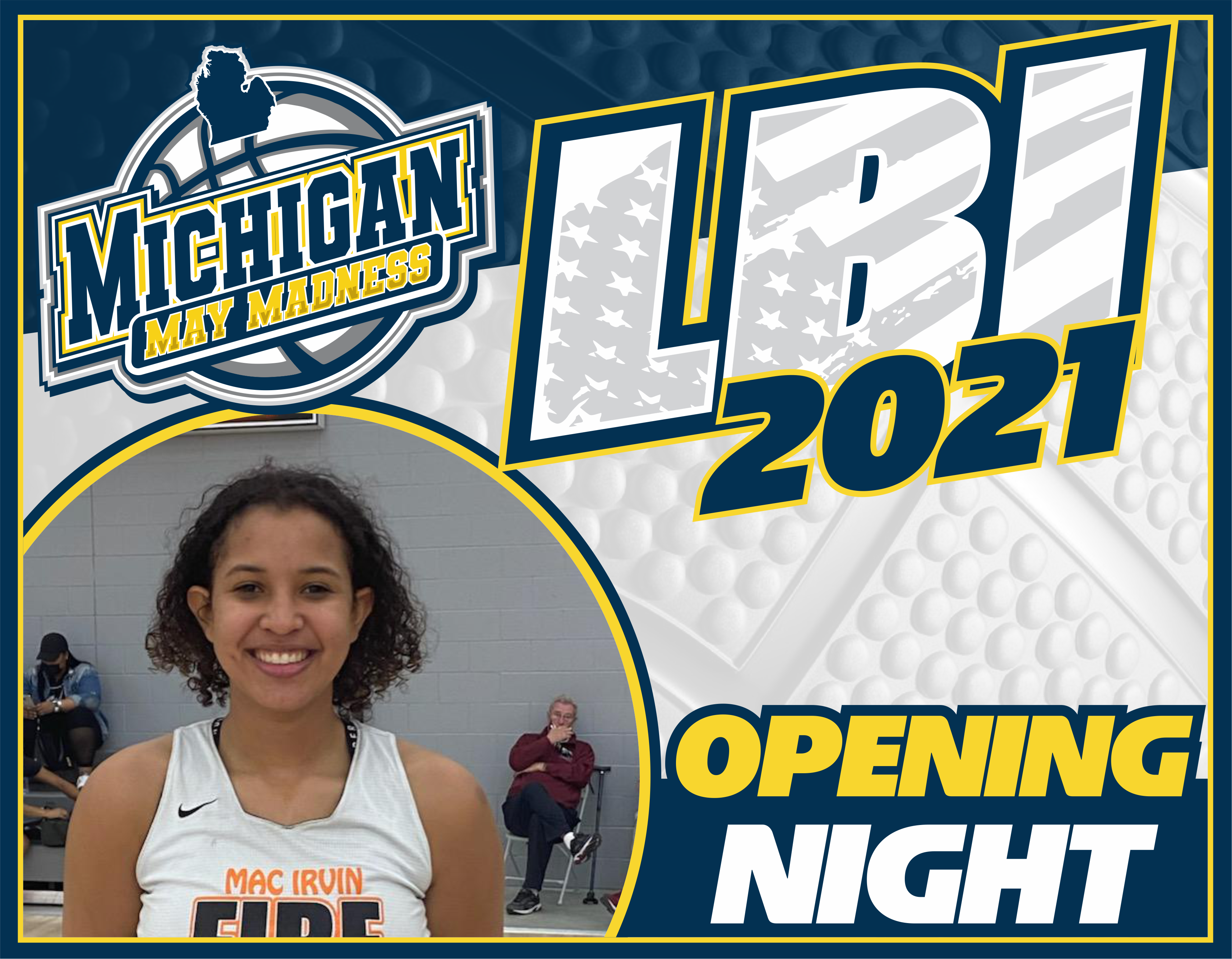 Brighton, MI: May Madness got off to a hot start Friday night and these young ladies did not waste time to show that they were ready to shine this weekend.

Alicia Young  6’1" 2022 Guard WPA Bruins 11th Connolly
Alicia has a very nice feel for the game moving around the floor with ease while aggressively attacking the basket.  Scoring from all over the floor, Alicia showed a nice feathery touch around the rim and also showed her ability to put the ball on the floor and create a shot. She was also not afraid to get physical on the defensive end and rebounding the basketball.

Ella Kruschka 5’7" Guard 2022, O3
Ella caught my eye early in warmups with a sweet-looking stroke as she rattled off 3 after 3 barely moving the net, and as soon as the ball was in play nothing changed. Ella knocked down multiple triples for her squad while running the point and playing off the ball. Mixing in tough defense with multiple steals and some nice dimes to her teammates Ella showed she has the full package.

Sophie Canen 5’10" Guard 2022 O3
Sophie does it all for her O3 team and she showed tonight just how good she is at doing multiple things on the floor.  Assists, buckets, rebounds, steals Sophie had her hand in a little bit of everything tonight and was quite good doing it. Standing 5’10" with a nice handle and great vision Sophie was able to dictate the flow of the game, look for a big weekend from this 2022 guard.

Camille Jackson 5’10" Guard 2022 Mac Irvin Fire Godfather
Easily the most athletic player in the gym today, Camille was all over the floor wowing the crowd with her amazing finishes at the rim and her ability to get to the basket anytime she wanted. Camille took advantage of her team’s stingy press and scored in the open court multiple times while drawing some oohs and ahhs from the crowd by effortlessly smacking the glass on her finishes.

Skylar Jones 5’11" Forward 2023 Mac Irvin Fire Godfather
Skylar a very long, smooth wing, showed just how bright her future is as she glided to the hoop at will and seemed to be everywhere on defense either getting the steal or forcing one. Offensively if she wasn’t scoring the rock she was dropping some pretty sweet dimes to her teammates for a bucket. Only a Sophomore look for big things from Skylar.

Tahj Bloom 6’3" Forward 2024 Mac Irvin Fire Godfather
Tahj is BIG-TIME, only a freshman she managed to dominate the game on both ends of the floor. Very agile and athletic Tahj blocked shots, threw great outlet passes, ran the floor finished pretty much everything around the rim caught a few lobs passes for tip-ins, showed great body control and ball skill she was pretty much unstoppable tonight.  Coaches will be lining up to get a look at Tahj she is special and she is just getting started.

Dara Capaldi 5’11" Wing 2022 Factory Orange
Coming off a recent offer from EMU Dara showed why she is garnering the attention from the MAC school by eluding double teams with an elite handle and ability to get to her spots on the floor to either create for herself or for a teammate. Dara affected the game offensively and defensively being very aggressive with or without the rock and controlling the tempo. By the end of the weekend, Dara just might be adding a few more offers to her portfolio.

Lille Gustafson 6’0 Post 2021 Cagers
As a coach myself I can tell you Lille is a coach’s dream, she plays the right way and there is literally nothing she can’t and won’t do for her team on the floor.  Lille was deep in her bag tonight, scoring with ease, rebounding pretty much everything, getting to every loose ball, blocking shots basically doing whatever it took to win the game. Lille has a great feel for the game showing off her handle and her ability to be a playmaker just as well as scoring the rock.

Ashley Bower 5’10" Guard 2022 Capitol City Express
A true floor general Ashley does it all for her squad, the one sign of a great point guard is tempo and how well they control it and Ashley was the epitome of cool. Never letting the pressure or the defense speed her up she remained at her pace as she weaved through the press setting up her teammates or getting to the basket to draw the foul or get the bucket.  Ashley showed why the coaches were lined up to check her out tonight she is a special talent that will definitely a big pick-up for whoever is lucky to land her.

Alayjah Jones 5’8" Guard 2022 WPA Bruins
Tough hard-nosed guard who caused all kinds of issues for her opponent with her relentless in your face defense and the way she applied pressure with the ball initiating the pick and roll with her teammate Journey Thompson. After taking a break Alayjah came back in the game and orchestrated a 10- 0 run by scoring or dishing out of the pick and roll and seemingly making the right read each time.  Alayjah plays with all kinds of energy and was one of the most aggressive under control guards I watched all night.

3 is better than 1
Where most coaches are happy to have just one guard that can run the show and be a game-changer well the Pride 2022 squad has 3.

Izzy Hadley 2022, Maddy Skorupski 2022, and Maeve St John 2022 put on an absolute show tonight. All three took turns showing elite handles, playmaking ability, sweet passes, and just a feel for the game that was great and fun to watch. St John a Northwood commit plays the game with a smile and a flair that is loaded with confidence that she can do whatever she wants with the ball in her hands and most of the time she could. Skorupski put it on the floor to get to her spots and knocked down the J when you backed off of her she also dropped some look-away dimes that had the defenders looking the other way. Hadley the floor general had the whole game under control, getting to the hoop and dropping dimes while also leading the defensive effort. These girls are must-see, never a dull moment when they are on the floor!