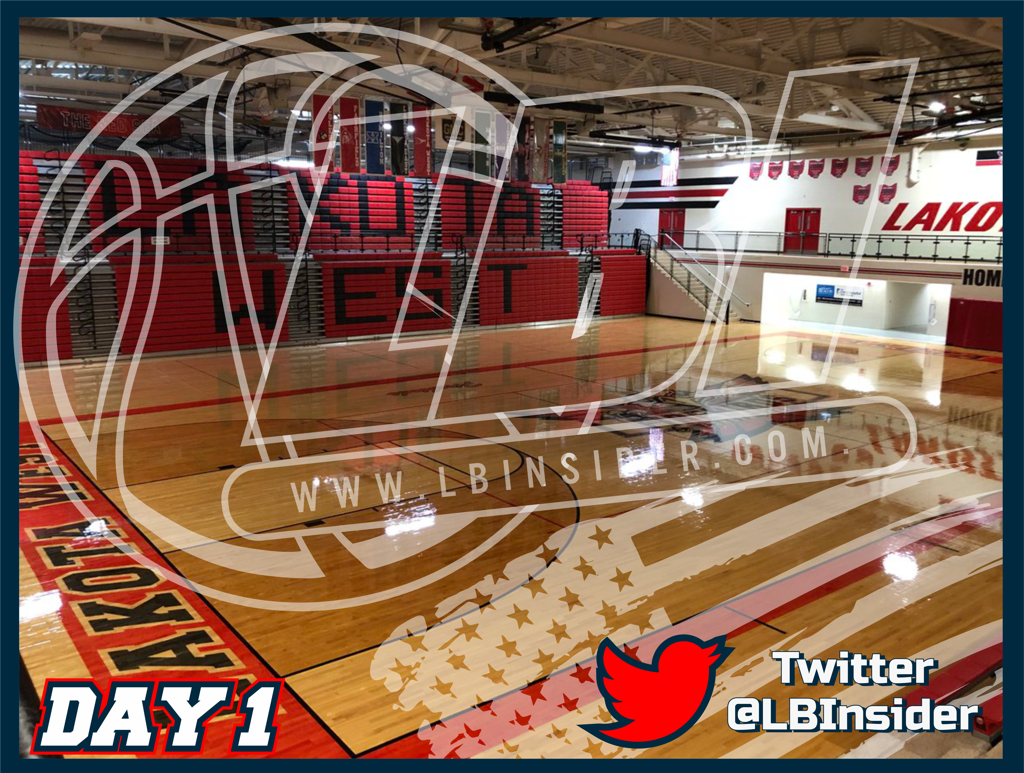 West Chester, OH – The day that we have been waiting for finally arrived. A high school regular season basketball tournament. With so many states still on shut down as it pertains to high school sports, it was so exciting to be able to step in the gym and watch some great talent. Seven games, back to back, from dusk till dawn. 14 teams came locked in and ready to battle. You could see it in their eyes as they stepped on the court. Social distancing, mask requirements, and clearing out the gym after each game were the new norms but worth the adjustment. Keeping everyone safe was the priority. On a side note, with all of the craziness going on in the world, it was really heart-warming to see the positive attitudes and togetherness of the coaches and lady ballers. I wish the world could see life through their eyes; one team with one goal. The only thing that mattered was the name on the front of their jerseys and playing their hearts out for each other.

Erykah Cornett 2023 | Oak Hills High School
Erykah was a burst of energy that stayed powered up the entire game. She did a great job of reading the court and making necessary adjustments on both offense and defense. She has quick hands, forcing her opponent to fumble the roc and create some turnovers. Her leadership on the court stood out. She finished the game with 9 points and a win.

Avery Miller 2022  | Unioto High School
Getting to the rim consistently was clearly a goal for Avery. On multiple possessions she penetrated the middle, forcing the defense to make some quick decisions and adjustments. In a somewhat frustrating game for her and her teammates, Avery continued to fight and give her all. She finished with a team-high of 12 points.

Keianna Sheridan 2021 | Sycamore High School
One of the toughest players on the court, Keianna might be a guard but she fought inside like she was 6’4”. She was the first one to crash the boards and had no problem getting to the rim on offense. She played just about every minute of the game and probably could have kept going. She finished with a game-high of 15 points and 10 rebounds.

Mackenzie Gloff 2022 | Eastern Brown High School
Mackenzie did an awesome job of not only creating a huge presence in the paint but being a consistent factor in her team’s offense. Not just by scoring, but by doing the things that create great plays. Setting strong picks, boxing out, being vocal, and finally, finishing strong at the rim. She finished with a team-high 13 points.

Anna Grim 2023 | Centerville High School
Whether it was a catch and shoot situation or letting it fly off the bounce, Anna’s shooting hand was on fire and so was the net. She knew exactly where she was on the court and called for the ball when she was open. Not only did she knock down shots from everywhere, including three deep three-pointers, she was a big asset on defense also. She finished with 12 points.

Cotie McMahon 2022 | Centerville High School
Cotie was simply magnificent. There wasn’t anything this Ohio State University commit couldn’t do. She sank three-pointers, she finished on multiple occasions at the rim with a ton of contact, led fast breaks, and made some strong defensive plays. Looking forward to seeing her at the next level. She finished with a game-high 27 points.

Diawna Carter-Hartley 2023 | Princeton High School
Diawna was brilliant in the post. She established herself facing the rim and with her defender sealed on her back, she is athletic and knows how to go get the ball and finish strong, and defensively has great timing which added up to a bunch of rebounds and a few blocked shots. She’s tough and played hard from start to finish. She finished with a team-high 22 points and 11 rebounds.

Madison Roshelle 2021 | Princeton High School
With a long frame and the ability to jump out of the gym, Madison’s athleticism and style of play were very impressive. She got to the hoop with no problem and on occasion seemed to hang in the air a little longer than most. Not only does she have long arms, but she’s fast and has quick hands, which made her a constant pest on defense and a nightmare to defend on offense. Her stamina is through the roof and she can take contact with the best of them. She finished the game with 13 points.

Chance Gray 2022 | Lakota West High School
Athletic, quick feet, and very versatile, Chance let it be known right away that she was the player on the court you needed to watch. She has great on the ball defense to match up with her arsenal of moves to the hoop. She can jump out of the gym and had no problems getting to the rim to score…and she can shoot! She finished with a game-high 30 points and 7 rebounds.

Kenzie McConnell 2021 | Circleville High School
The Ashland University commit did her best to put her team on her back and push to the victory line. She played multiple positions, including point guard. She boxed out and snagged some big rebounds. She finished strong at the rim with and without contact. Although her team came up short, Kenzie’s leadership and endurance were on full display. She finished the game with a double-double; 16 points and 11 rebounds. She was the only person on her team to score in double digits.

Rylie Horman 2024 | Edgewood High School
A strong ball handler that played well when faced with pressure, Rylie stepped up big for her team. The freshman guard showed that she is an asset in more ways than one. She is a vocal leader, she gets inside and did a pretty good job of reading the court. Although her team didn’t get the win, Rylie's hard work, effort, and dedication to her team did not go unnoticed. She finished with a team-high 11 points.

Grace VanSlooten 2022  | Toledo Notre Dame High School
One of the most versatile players I’ve seen all day, Grace’s ability to alternate where she dominated was at times mind-blowing. Grace is a post player that can be an offensive threat facing the basket, on the block, or at the high post. She showed that she can handle the ball by snatching down rebounds then going coast to coast on more than one occasion. Grace also was able to take her defender to the rack off the dribble and finish strong. She finished with a game-high 22 points and 12 rebounds.

Bree Hall 2021  |  Wayne High School
Bree’s ability to put the ball on the floor and have her way is incredible. Once she starts going downhill it is a wrap. She is able to jump above her opponent and finish strong at the rim, even with a hand on (yes on) her face and a whole person on her back. This University of South Carolina commit is a vocal leader and made some great decisions that gave her team the momentum and confidence to fight back and win a very close game. She finished with a game-high 21 points.

Mari Russell 2022 | Reynoldsburg High School
Mari has the energy of a hurricane! She went full throttle from start to finish on both ends of the court. In addition to her top-level talent, she has an unbelievable heart and plays fearlessly. She takes contact and gives out a little of her own, never backing down from a challenge. Amari handled the roc well under pressure and worked hard to make herself available and get the ball in the hoop. She finished with a team-high 11 points.

KK Bransford 2022  | Mount Notre Dame High School
KK was hands down the most dominant player on the court during her game. She made the paint her home and did whatever she wanted to do it. She was phenomenal at controlling the boards on both ends of the court and finishing strong at the rim. Her presence was felt and definitely respected. She left them no choice. She finished with 20 points and I’m positive double-digit rebounds.

Kiya Dorroh 2021 | Arizona Compass High School (AZ)
The University of Missouri commit traveled really far to play today and she made sure she packed her game and brought it with her. Her game is smooth and quiet. She scored in spurts and without a lot of noise. No need for it. She can shoot, has a nice jump shot, and made great decisions with the ball. When it was all said and done, Kiya had quietly scored a team-high 17 points.