Sole Williams | Ohio United Had It Going On In Reynoldsburg 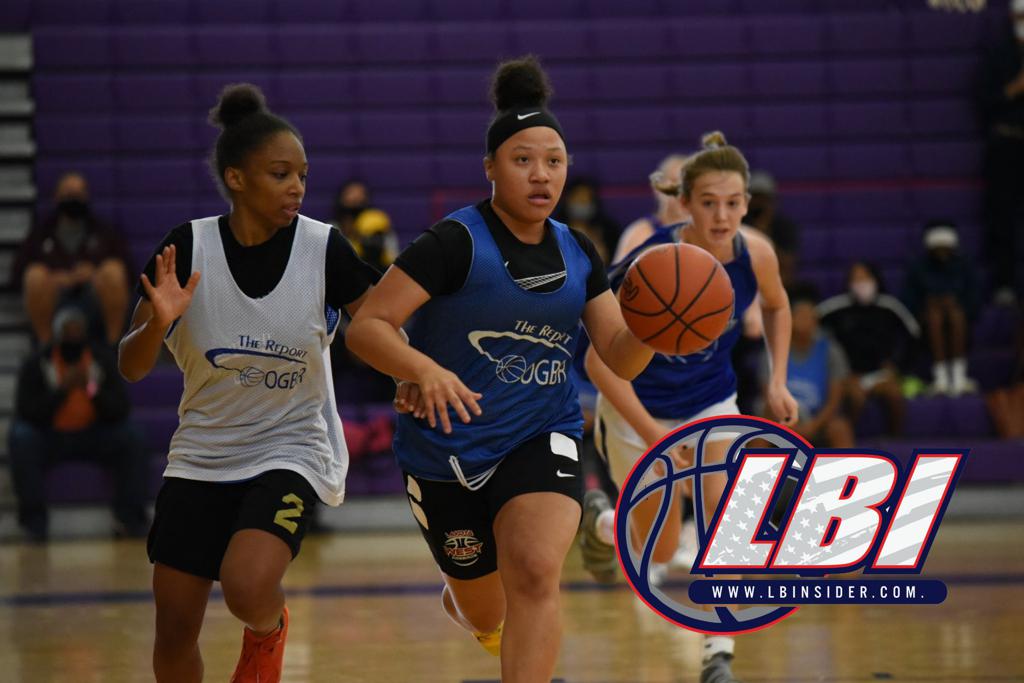 Reynoldsburg, OH – With travel and recruitment season being cut extremely short due to the worldwide pandemic, players everywhere are taking advantage of every opportunity they can to get on the court and show what they are made of.  This Sunday, OGBR gave over 300 lady ballers the opportunity to just that at their Top 64 Showcase. In a round-robin format, players from all over the Buckeye State stepped onto the court ready to go to war.

Raven Raye-Redmond 2023 | Trotwood
Raven made me say “oh wow” several times. Her game is very traditional and fundamental, however, she hit some very acrobatic shots in every game. She’s strategic and knows how to find a way to get it done. “It” meaning score. She played hard every possession and made some smart decisions.

Sinai Douglas  2024 | Toledo Start
Always having a hand in the lane to tip or steal a pass on defense, Sinai made going coast to coast for layups look like it was an actual offensive play. She has a high motor and gave her all every second she was in the game.

Kendall Braden 2024 | Notre Dame Academy
Kendall is a long versatile player who was not afraid to put the ball on the floor and get to the rim. She consistently crashed the boards for rebounds. She is not afraid to let the ball fly from behind the arc and knows how to get her teammates involved.

Kendal George  2023 | Centerville
Smart player that is crafty and knows how to effectively weave through traffic, Kendall showcased her ability to read the defense and adjust accordingly. When she had the defender on their heels, she attached, if they did not have a hand in her face she knocked down 3-pointers. She also showed that she is able to fight through fatigue and play hard.

Sole’ Williams 2023 | Cincinnati Princeton
Athletic with a quick first step and an arsenal of moves, Sole’ seem to get to the basket whenever she felt like it. She was not afraid to take contact which she did often. On defense, she used those long arms of hers to block and deflect the ball for easy buckets on the other end.

Sarah Baker  2024 | Ryle
Sarah was an unmovable presence in the post. Once she was established, she was not budging. She has nice footwork and played well facing the rim and posting up. Sarah was great at running the lanes in transition. She also showed that she can knock down a mid-range jump shot off the bounce.

Adrena Gordon 2024  | Archbishop Hoban
Adrena was not the typical guard. She has a solid frame and is strong as a bull. However, she is quick, crafty, and knows the game. She played great on the ball defense against smaller guards and even got on the block and showed her post moves. She is a scorer and doesn’t mind putting her team on her back.

Karley Moore 2023 | Bethel
Karley showcased her ability to play and defend multiple positions. She is a hustle player and was often found at the backboard grabbing a few rebounds. She’s is a tough kid and did not mind going to the block and posting up.

Clark Jackson 2023 | Gahanna Lincoln
A player that knows how to put her size advantage to good use, Clark was great at overpowering smaller defenders or length to throw some great passes and get her teammates involved. She had a nice selection of moves to help get her through traffic. Clark was a vocal leader and let it be known that she can score.

Morgan Kress 2023  | Westlake
Morgan is a great inside/outside combination player. She can put the ball on the floor and made some great decisions when she did. She sees the court and knows when to cut, set a pick, or go to the hoop. She plays extremely hard, even when she was visibly exhausted. She also was a strong rebounder. Morgan let it fly from deep as well.

Nevaeh Brownlee 2023 | Columbus Africentric
Nevaeh is the player who has an impact on the game regardless of what the stat sheet says. She did play extremely hard on both ends of the court. She crashed the boards and rebounded, she sat down on defense and was the scrappy player who always seemed to be involved in jump ball situations. Her efforts changed the tempo of the game.

Ayla Turk 2025 | TPS Bowsher
Ayla has a great sense of the game. She’s strategic in everything she does. She knew how to draw the defense to her and drop a sweet pass to the open man. She never rushed or forced any offense, but had no problem attacking the basket and putting the ball through the net herself.

Aryiana Cradle 2026 | Columbus
When Aryiana realizes just how good she is, the world is going to be in trouble. She just plays. If she sees an opportunity, she goes for it. On defense she had one objective…get the ball. She has a nice size and can play multiple positions at her age. Her game was aggressive and came to her naturally.

Rylee Bess 2025 | Pickerington
At times, Rylee was moving so fast, she almost ran clear off of the court! She has the handles and passing ability to go with that speed. She is a score-first player. It doesn’t matter if she is scoring or getting the assists, she is offensively motivated. She has a quick trigger also, letting the ball fly from deep several times.

Sa’Mahn Johnson 2025 | Reynoldsburg
Sa’Mahn had a certain swag to her game that gave her unlimited confidence. She battled inside with much bigger players for rebounds, she handled the ball well in traffic and under lots of pressure, and she got to the rim, taking a lot of contact. She was a natural vocal leader, working well with her personnel.

Kaylah Thorton 2026 | Kettering School District
An athlete in every sense of the word, there wasn’t anything that Kaylah was unable to do. She ripped through the defense, getting to the rim and accumulating old fashion three-pointers one after another on both sides of the rim. She never forced anything, knocking down long-distance and mid-range jump shots. Her defense was on point. She was vocal, aggressive, and quick. What was most impressive about Kaylah was her attitude. She was a cheerleader on and off the court, she ran to help any teammate off of the floor and encouraged her teammates to keep going when they made mistakes. She is definitely special.

Layla Hale 2026 | West Clermont
At first sight, one would assume that Layla is a 4 or maybe even a 5. Once the ball goes in the air, she quickly showed you that you were wrong. She has the ability to play the 2-4. She has great ball-handling abilities and knows how to use them to get to the hoop. She is a strong rebounder and can shoot it from deep. She has a nice “stop and pop” that was almost impossible to stop.

Mayla Collins 2025 | Westerville
Mayla’s energy and effort were undeniable. She is a hard worker, never taking a possession off. She was a phenomenal defensive player, tipping passes and stealing the ball like it was nothing. Mayla has a ton of potential and I look forward to seeing her as she develops.

Brooke Asher 2025 | Lakota East
With a high IQ and the natural ability to lead on the court, Brooke’s intensity was consistent and contagious. Her catalog of crafty moves to the basket was impressive. One time she gave a deadly hesitation move that caused two defenders to jump in the air. Her motor is always on go.

Layke Fields 2025 | Kennedy Catholic
The muscle in the middle, Layke’s strength, and presence made her standout right away. She knows how to get established and demand the ball. Her footwork is advanced and she showed it off with a couple of up and under post moves that allowed her to take a lot of contact and get a trip to the free-throw line.