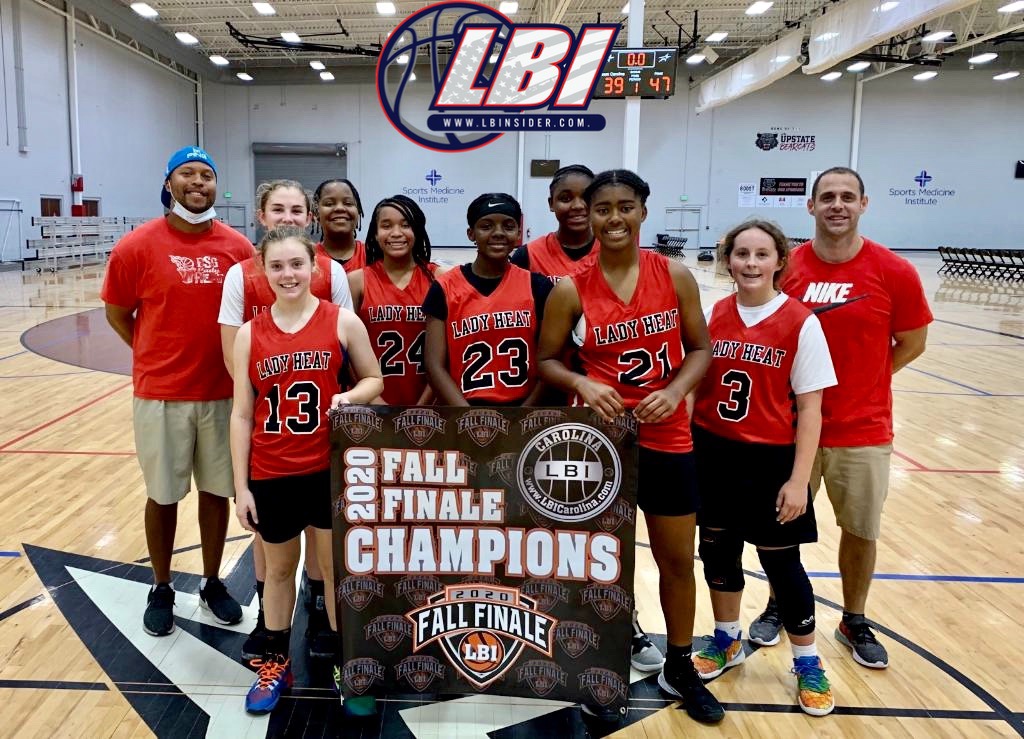 Spartanburg, SC - The time of year has come when the air is a little cooler, the day time is a little shorter, the leaves are starting to turn, and travel basketball season is coming to a close. 2020 has been a year filled with dramatic highs and lows. Thankfully, one thing that has remained consistent is the passion and phenomenal play that lady ballers from a variety of regions have been bringing to the court. The LBI Carolina Fall Finale was no different. Day 2 of the tournament was marked as Championship Day. The best of the best set themselves apart from the rest, closing out this travel season with a championship and bragging rights.

THE TEAM OF THE DAY: Lady Heat

Nothing excites me more than sitting down to watch a game that is fast-paced, well-coached, and full of exciting plays; especially when I look at a roster and see that the majority of the team has yet to play one high school game. The Lady Heat is comprised of 2024-2025 players that are athletic, skillful, and flat-out ballers. Their communication on both ends of the court was the best I saw regardless of age. They are loaded in every position, with multiple scoring options. Not only are they talented, but they are also tough. They play with so much energy and heart, I almost caught myself getting pumped up right along with them. A more fitting name for them would be Lady Hustle because that is what they do on every single possession. As good as this young team is, I can only imagine how great they will be in years to come.

Journi Grice 2025 | Shepard Middle – Being the floor captain seemed to come second nature to Madison. She was great at running the team’s offense, even when she didn’t have the ball. She has a quick first step and she knows how to use it.

Winter Scout 2024 | Williams High School – Winter showed that she has the ability to come off a screen and knock down a three or keep turning the corner for a nice pull-up shot in the lane. Whether it be on offense or defense, she took no possessions off.

Allie Sykes 2025 | Western Alamance Middle – A feisty guard that shot the ball so deep I thought she was out of bounds, Allie was not playing games with anyone. She wanted to win and it showed on both defense and offense. She could get a little scrappy at times, doing whatever she could to get her team the ball back or points on the board.

Christina Bowers 2025 | Southern Alamance Middle – Christina is athletic with a long reach and a lot of talent. She played multiple positions on offense and defense. She can handle the ball, going coast to coast more than once, weaving through traffic and finishing strong at the rim. She consistently crashed the boards and played some game-changing defense.

Samiyah Barker 2025 | Neal Middle – Hands down the best defender on the team, Samiyah took pride in guarding the best player on the opposing team. She has a high motor and not once showed any signs of fatigue. She is aggressive on offense, often finding her way to the rim even with contact.

STAND OUT PLAYERS OF THE DAY

Daja Taylor 2022 | Newberry Academy
Daja’s hand was on fire, sinking four three-pointers in the first half. That wasn’t all Daja did. She was the primary ball-handler for her team, gaining some assists along the way. She also played some solid defense. She’s quick and did an awesome job of staying in front of her man.

Janiyah Ferebee  2023 | Hilton Head High School
Athletic with a quick first step, Janiyah was the energy source for her team. She has a high motor and plays extremely hard on both ends of the court. In addition to her great defense, Janiyah let it rain from deep, sinking a few three-pointers during the game.

Teriana Gray 2024 | AC Flora
When nothing seemed to be going right offensively for Teriana’s team, she managed to dig deep and turn up the fire. She was aggressive and attacked the basket, leading to layups or trips to the free-throw line. During this period she showed off her fancy footwork and her ability to work to get open and create for herself.
Riley Stack  2023 | Wren High School
Riley is listed at 6’4” but her wingspan makes her much taller. She is light on her feet and runs the court well. She did a great job of filling the lanes and making herself available on the post. Riley has a soft touch and finished strong at the rim. She has good timing, allowing her to be dominant on the boards and block shots left and right.

Sommer Joseph 2022 | Darlington High School
A solid frame and the strength to match, Sommer was a force that was not to be taken lightly in the paint. She knows how to clear out her area to rebound or make a sweet post move to the rim. Once she gets going downhill, there was literally no stopping her. She’s strong, but she has great body control and knows how to not commit an offensive foul.  Sommer was good for eight or more rebounds every game I watched.

Anala Nelson  2022 | Lower Richland High School
Hands down the best defender I watched, Anala brought her defensive handcuffs to the court every game. She is much quicker than she looks and she knows how to get low and wide. She has long arms and was great at deflecting passes and blocking shots. If a player could be penalized for having too many steals, Anala would be in big trouble.

Sarah Strong  2024 | Fuquay Varina High School
A complete player in every sense of the word, Sarah was refreshing to watch. On championship day, she played primarily in the high and low post and she dominated. Her ability to think quickly and create for herself was remarkable. She also dominated the boards and delivered some great passes. She understands the game and knows how to make things happen.

Emerson Thompson 2024 | Falls Lake Academy
Most shooters don’t play hardcore defense. We all know why. They are trying to save their legs for the offensive end. Well, no one shared this information with Emerson. She plays tough and gritty on defense, never backing down from a challenge or shying away to give a little contact. On offense, she could shoot the ball from anywhere on the court, knocking down some beautiful three-pointers with a hand in her face.

Ep Sluder 2023 | Asheville Christian Academy
Ep came to the court ready to go to war and it showed. She played aggressively on both offense and defense. She was a great facilitator on offense, delivering needle threading passes and knocking down some tough shots. On defense, she was a pest, staying on her opponent's face, never letting up.

Serenity McNair 2024 | Greenfield School
A strong floor leader, Serenity was the pulse of her team. She is a great facilitator, making some great decisions and keeping the pace of her team’s offense where it should be. She has great court vision and always got the ball where it needed to go. Serenity can also score, taking defenders off the dribble to the rim and sinking some deep shots when left open.