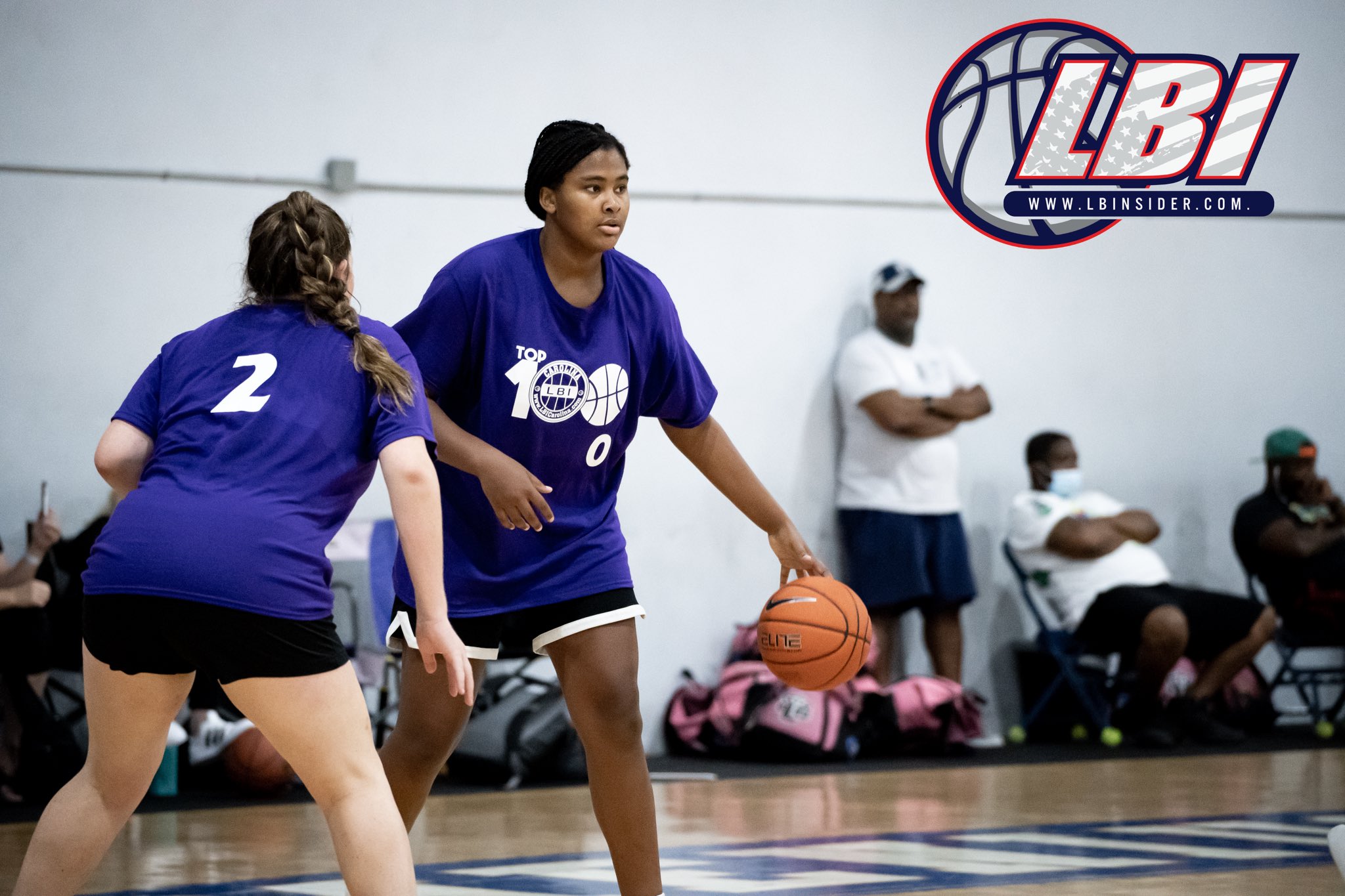 Fort Mill, SC: If you are a top stand-out player in the Carolinas, or you think you are, the place to be on Saturday, September 12th was Fort Mill, South Carolina, for the LBI Carolina Top 100 Showcase! Young lady ballers from the classes of 2021 – 2027 brought their time, attention, and game to the gym and to state their claim as one of the best in the area. Some of the best trainers and coaches around came to facilitate skill stations and leave some basketball gems with the players. All of the games were intense and a lot of fun to watch. Here is a snapshot of a few of the players that showed they are queens of the court.

Sarah Strong 2024 | Fuquay Varina High School
Sarah was arguably the best player in the gym, regardless of class, regardless of position. What set her apart the most was not her dynamic footwork in the post, or her ability to take her defender to the hoop at will, or that she can play just about every position effectively; it was her IQ. She knows the game like she’s been playing her entire life. Her decision making and overall knowledge of the game was indisputable.

Gabrielle Troy-Mebane 2026  | Mint Hill Middle
Gabrielle is a quick floor leader who literally would beat her team up the court, decide if she had a team or not, then pull the ball back and set up the offense. When she turns on the go switch, there were very few on the court that could keep up or stop her. She also has the ball handles to match it.

Isabella Roman 2024 | Cardinal Gibbons
If there was even an ounce of fear or nervousness in Isabella, you couldn’t see it. She did everything. She shot the ball from deep without hesitation. She handled the ball under pressure, never looking down and always finding the open man. Isabella even battled for rebounds against much bigger players. She is a natural leader and game-changer.

Chloe Moss  2024 | Independence High School
The thing that stood out most about Chloe was her ability to find a way to score, no matter what. Once she established herself and her team got her the ball, she utilized all the moves that coaches and trainers teach their players and added some flair of her own. She did not shy away from contact either.

Gabryell Locklear 2025 | Magnolia Middle School
Gabryell put on a display that although her primary position is a guard, she is a complete player. She can drive to the hoop and knock down a jumper. She is smart, and it shows on both ends of the court, and she knows how to keep her composure. Even when she got hammered by two players going to the rim, her facial expression never changed.

Celena Grant  2026 | Paul Knox Middle
An aggressive, offensive player that is strong and effective, Celena held her own in the paint. She battled for boards and for shots, usually coming out victorious. She had some crafty moves to get to the rim and finished strong. She is a solid defender also.

Jayda Angel  2024 | McWilliams Middle
What you see is not what you get when it comes to Jayda’s game. The quiet, soft-spoken player turns into a monster once the ball is in her hands. She is fast and creative. She knows how to create her own shot and score. She has an arsenal of moves that she uses that left defender after defender stuck and unable to move. Jayda plays much bigger than her size and is the epitome of hustle.

Gabby White 2025 | Margaret B Pollard
With long arms and a long stride, Gabby showcased her ability to control the tempo of the game and the ball when under pressure. She protected the ball and had few to none turnovers. She had good court vision, attacking the gaps or sipping a pass to her teammate. She was a natural leader.

Olivia Randolph 2024  | Westside High School
Olivia was phenomenal at running the court and making herself available to score or rebound after a missed shot. She has great court awareness and used it to make some awesome passes to teammates. She has a wide wingspan and can rebound in and out of her area. Olivia is not a pushover, holding her own in the paint.

Ashanti Fox  2025 | O’Neal
Ashanti caught fire during the 5-on-5 scrimmages, knocking down shot after shot. One game, she knocked down three 3-pointers from far beyond the arc. She is quick and crafty, knowing how to maneuver her way to the hoop threw traffic. On defense, Ashanti got multiple steals and caused a lot of trouble.

Trinity Vance  2024 | Legacy Early College
A leader will lead, regardless of the situation they are in, and that is exactly what Trinity did. The way she gave directives, kept the offense moving, and handled the ball under pressure and a double team, one would be under the impression that she had been the floor captain of her team for years. She has a quick first step and knows how to draw in the defense and get the ball to the open man.

Olivia Tucker 2024 | Durham School of The Arts
Olivia was a big ball of energy. She never seemed to get even a little tired, working hard on both ends of the court possession after possession. She is a scorer, doing so in multiple ways. She is a dynamic spot-up shooter from mid and long-range. She is cunning with her ball handles, creating the space she needs to get off her shot or a quick pass to her teammate. Olivia was a problem on defense and offense, and she has not even come close to reaching her full potential.