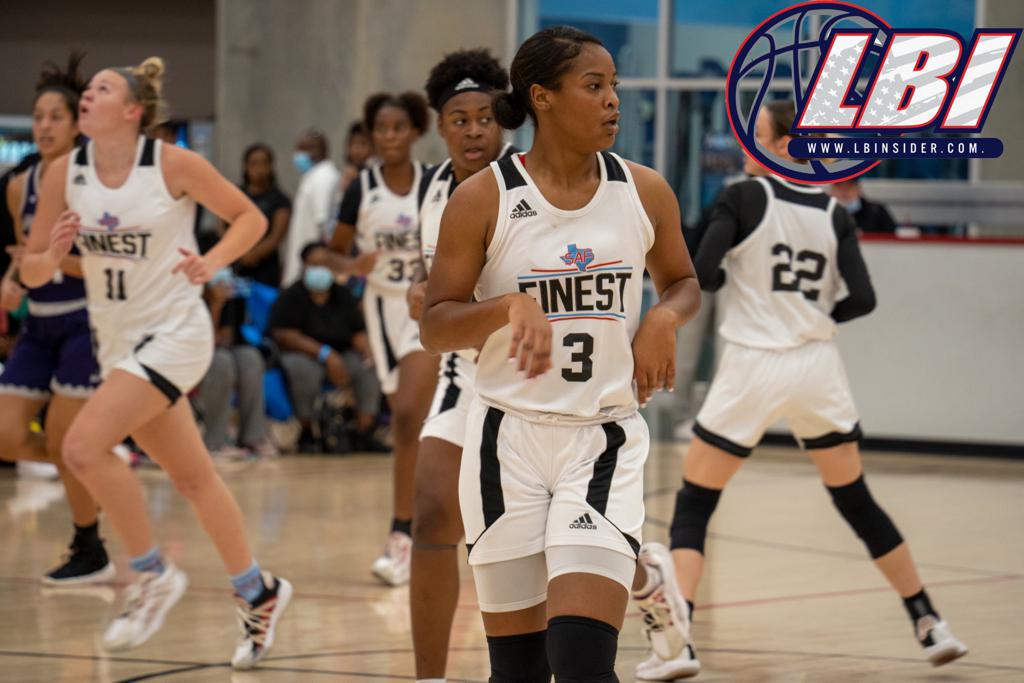 Mansfield, TX: The 2020 Prime Event kicked off this past weekend in Mansfield, TX, at the beautiful Mansfield USA Fieldhouse. Hosted by Premier Basketball (PBR), the gym was filled with several respected scouting services, top prospects, and top teams.

Ashlon Jackson  2022 | SA Finest – Cee Lou
When a player opens the game with a spin move in the paint and finishes with an old fashion three-point play, you know what time it is. Ashlon was beyond impressive on both ends of the court. Her athleticism, game IQ, and game-winning smile make for a deadly combination. She was a top ten performer hands down.

Keziah Lofton 2025 | Lady Jets Randle 15u
Long and athletic, Keziah set the bar early and continued to perform throughout the entire game. She is versatile and can play many positions, including the point. She has a long stride that she uses to get to the hoop and finish strong at the rim. Her game stood out so much; she picked up a huge offer before the weekend ended.

Alisa Williams  2022 | Texas U 17u GUAA
Alisa’s wingspan gives her an advantage that she utilizes well when rebounding, shooting, and playing defense. She is quick for her size and runs the court like a guard. She can play and defend the perimeter and show some solid footwork in the post. She’s a shot-blocker and does it with aggression and pride.

Jayla Lawson-Kennedy 2022 | Lady Jets Randle 15u
Jayla’s aggressive style of play was not only impressive but effective. She was aware of her size advantage over most that defended her, and she took advantage. She’s tough, so a little contact didn’t bother her at all. In fact, it made her go to the hoop even more.

Aubrey Reid  2023 | CyFair Elite 15u National-Bush
A scrappy player that will battle in the paint, Aubrey is much stronger than she looks. She consistently rebounds and is not afraid to take a little contact. She doesn’t mind letting the ball fly either, knocking down an overhand shot from the volleyball line at the other end of the court.

Shanel Reid  2023 | CyFair Elite 15u National-Bush
Just like her twin sister, Shanel is tough and scrappy, willing to get down and dirty for loose balls and to help rebound. She has a lot of energy and plays hard. She knows how to attack the lanes and draw contact.

Madison Carlton  2026 | Nike CyFair Elite -Lewis
To see a young post player consistently do all the right things offensively was flat-out refreshing. Madison ran the lanes and always made herself available. In a half-court set, she established herself early, kept her hands and the ball high, and was able to finish with and without contact. On defense, she did an awesome job of boxing out first and securing rebound after rebound. The little things that make all the difference came naturally to Madison.

Leilani Love  2022 | NM Elite 2022
A versatile player that can kill you offensively in more ways than one, Leilani was a force to be reckoned with. She’s athletic, has great court awareness, and is unstoppable in transition. She can score facing the rim and by posting up and is a rebounding machine.

Christeen Iwuala  2022 | SA Finest – Cee Lou
Christeen was a rebounding monster. She does all the little things to ensure that the ball coming off the rim will be hers. She is a huge presence in the paint and did a phenomenal job at altering and blocking shots. To top it all off, Christeen plants herself well and finished strong with some major contact.

Takayla Pitts  2022 | Pro Skills 16u Black
Takayla’s game face and her actual game go hand in hand. She is focused from start to finish, and it definitely shows. She’s a quick thinker and made some great decisions under pressure. The intensity she brings offensively is carried over to the defensive end as well. Takayla has long arms and legs and knows how to make herself stretch to shoot over defenders and get wide on defense. She was a lot of fun to watch.

Grace Abercrombie  2021 | Texas U 17u GUAA
Grace was the epitome of hustle. She was the energy source for her team on both ends of the court. Sheis very athletic and high flyer that has great anticipation and intercepted some big-time passes in clutch moments. On top of being a top-notch defender, Grace can score as well.

Da’Nae Jefferson  2026 | BTR Pink
Da’Nae might be young in age but not in heart. She is already a complete package. She can play and defend multiple positions. She is aggressive and not afraid to give or receive some contact. She’s passionate, and it carries over to her teammates, giving them the confidence and energy they needed to keep going in a very tough game. Da’Nae is one of the young ballers I saw this weekend that I am looking forward to watching her and her game grow up.

Chantae Embry  2021 | Arkansas Banshees
After watching Chantae play, I was ready to go to my hotel and call it a day. There was nothing left to say or see. Chantae literally did it all. She played and defended positions 1-5, she was a defensive nightmare for opponents, and she could score or get to the free-throw line whenever she wanted to. The recent Texas Tech commit was beyond impressive, and I enjoyed every minute.

Jaidyn Gunter  2026 | Nike CyFair Elite-Lewis
Jaidyn’s game is mature and aggressive. She has a nice IQ and the court vision to match. She throws great lead passes, especially in the post, something that players 3-4 years older than her often struggle with. She is vocal on both ends and has a mean “stop and pop” that she has mastered.

Kyiah Prestridge  2026 | BTR Pink
Young Kyiah showed that above anything else, she is a hooper. She is tough and scrappy, willing to all the things too many players don’t. She crashed the boards for rebounds, she is a solid on the ball defender, and she never ran away from a challenge, including splitting the defense to get to the rim.