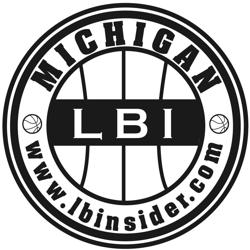 Redford, MI - The Motor City Roundball Classic is an event that has truly become a part of Michigan’s Christmas break tradition. Four days packed with basketball played by some of the best teams in Michigan and it’s bordering states. On the last day of the event, the matchups were intense, and a few went down to the wire. The event ended with a bang.

Taylor Anderson  2022  5’8”  CG  Detroit Renaissance HS
Taylor is the type of player that makes an impact on the game regardless if the ball is her hands or not. She plays hard and is smart. She battles for rebounds is a top of the line defender and can finish strong going full speed in transition. In the press, she is the player that creates the turnover and still manages to be under the rim to get the rebound if the layup is missed.  She finished with 8 points.

Khaniah Gardner  2021  6’2”  PF  Chicago Simeon HS
Khaniah was a steady and constant force in the paint for Simeon. She is as strong as a bull, and once she’s planted, there is no moving her. She’s athletic as they come and proved it time and time again, especially on the boards. On one possession, she was able to snag down three rebounds and finished with an old-fashion three-point play.   She finished with 10 points.

Jurnee Henderson  2020  5’6”  PG  Chicago Lindblom Math & Science Academy HS
Jurnee’s quickness was often unmatched and unexpected. She has the ability to stay in front of anyone and did so throughout the entire game. Her first step was a killer and often left her opponent chasing her as she drove to the basket. Her energy is high, and she played extremely hard! She finished with a team-high 13 points.

Semie Brar  2021  5’6”  SG  Chandler Park Academy HS
When her team started the game sluggish and seemingly not able to pull it together, Semie came off the bench and was an instant burst of energy. She knocked down a big three-pointer that kick-started an 8-0 run and gave her team their first lead. She would go on to get two steals and score 7 points in the first quarter. She finished the game with 13 points.

Emaia O’Brien  2021  5’1”  PG  Chandler Park Academy HS
When the game is on the line, and the clock is running down fast, big-time players make big-time plays. That is exactly what Emaia did. With only a little over 3 seconds on the clock in regulation, Emaia steals an inbounding pass and hits a quick layup, pushing her team’s lead to 4 and sealing the victory. For Emaia, it was a great ending to a great overall game performance. She finished with a game-high 18 points.

Nakia Bardney  2022  6’0”  SF/PF  Chicago Wendell-Phillips HS
Nakia did not play like she was a sophomore and showed to be a natural leader. When the game got tight, the ball was in her hands. She made great decisions, which usually resulted in her team scoring or getting to the free-throw line. Defensively she was a major key in not letting smoke become a full-blown fire when the other team made a run. Nakia finished with a game-high 16 points.

Tarin Cunningham  2020  5’7”  SG  Chicago Wendell-Phillips HS
Tarin worked hard the entire game, and it soon became contagious, and her teammates followed. She did all the little things that most scrappy players do, and it showed in the end. That same work ethic was demonstrated on both ends of the court, often giving her team easy layups as a result of a steal or forced bad pass. Tarin finished with 10 points.

Maya Kelly  2020  5’9”  CG  North Farmington HS
In the game of basketball, timing is everything. Just when it seemed North Farmington might be running out of steam, Maya would make a big play or hit a big shot to jumpstart her squad. She has long arms, which made her a nuisance on defense, especially for the shooters.  Maya finished with a team-high 11 points.

Taylor Thompson  2022  5’10”  CG  Grand Blanc HS
Taylor picked up right where she left off last night, appearing to bring even more energy to today’s game. Her athleticism was unmatched, and she was able to get where she wanted when she wanted. She ran the court hard in transition and used her length to alter shots on defense. She worked hard on the glass and grabbed some game shifting rebounds. She scored a total of 16 points.

Gabby Fogarty  2020  6’0”  SG  Maryville HS
The question of the day is not what Gabby did in the game. The question is, what didn’t she do in the game. She defended multiple positions and showed just how tough she is. She scored from all over the court and did it consistently throughout the entire game. At halftime, she had 11 of her team’s 14 points. She is a workhorse and did not take any possessions off. She scored a game-high 18 points.

Sophie Dziekan  2020  6’3”  PF  Brighton HS (Signed With Bowling Green)
Sophie “Skyhook” Dziekan used her high IQ, relentless defense and unstoppable hook shot to lead her team to victory in a hard-fought, down to the wire game against Arbor Prep. Her voice could be heard on both ends of the court, and her presence was undeniable. In the final seconds of the game and her team with a slim two-point lead, Sophie blocked a three-point shot and sealed the victory. She finished with a game-high 22 points.

Mya Petticord  2022  5’9”  SG  Arbor Prep HS
Mya is young in age but has had her fair share of down to the last second battles, and her composure said just that. She showed up like awesome players do in these situations. She drove to the hoop, created shots for her teammates, and collected some steals at game-changing moments. She finished with 17 points.

Maddie Osantowski  2023  5’9”  CG  Reese HS
Maddie was a Jill-of All-Trades, showing that she is a flat-out ballplayer. She helped to control the tempo of the offense, including creating some impressive shots for herself. She took some hard contact and finished strong at the rim. At one point, it seemed as though whatever she put in the air was going straight to the bottom of the net. When the attention was all on her, she made sure she got her teammates involved and did a great job on the defensive end. Maddie finished with a game-high 29 points.