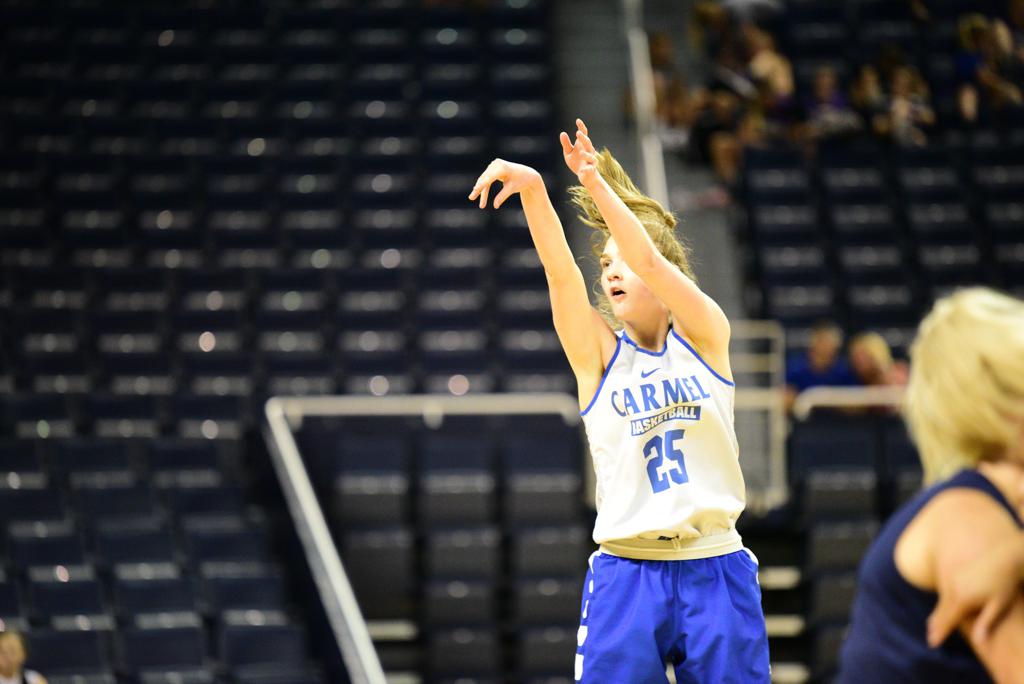 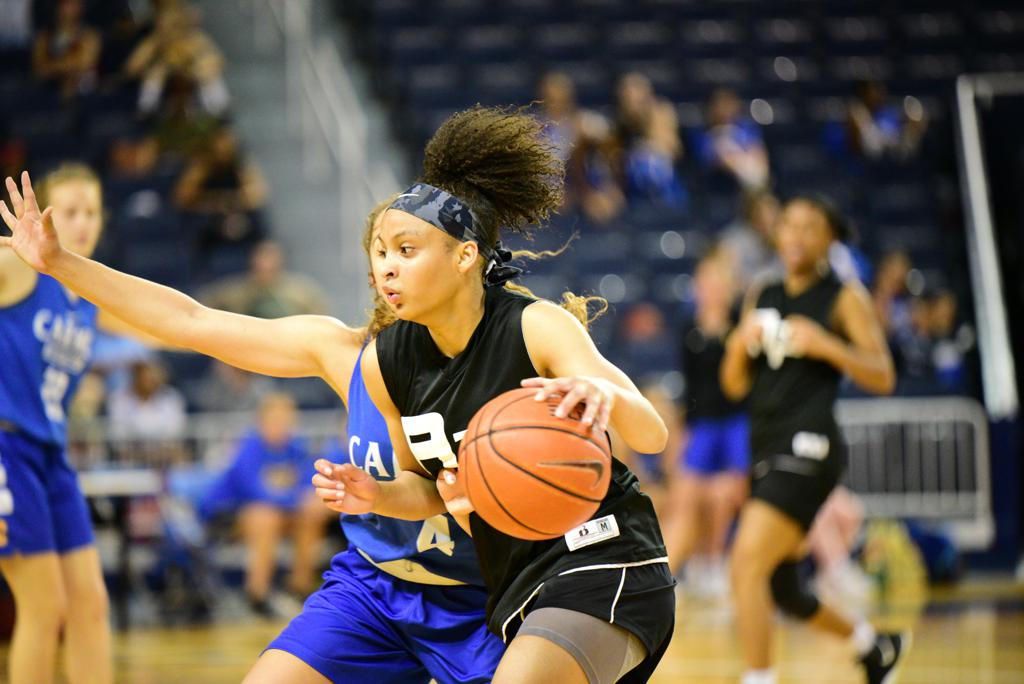 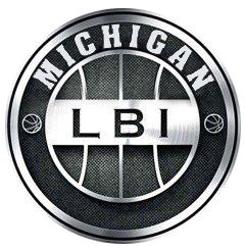 Ann Arbor, MI: Travel Season has come to a halt, but of course, basketball never stops! Team and elite camps along with summer league competition take place to give us an early sneak preview of what teams look like long before the season starts. LBI was on hand for University of Michigan Team Camp on Sunday, here are a few standouts from Ann Arbor.

Baylor Basketball (IL)
This young quick and athletic team was more than a handful for everyone they faced. They are competitive, fearless, and coachable…the perfect combination for a championship team. All five players can run the floor exceptionally well and can move well without the ball. Scoring is never an issue primarily because there are at least three scoring options always on the court. With a pair of 2021 kids in 6'2" Aneesah Morrow '21 & 6'1" Klaniah Gardner '21 who was fantastic in the open floor as they converted many steals into easy transition points.

Carmel (IN)
Patience, accuracy, and team chemistry are all things that the Carmel possess. Led by 6' sharpshooter Kate Clark '22 and 6'3" PF Bridget Dunn, Carmel showed that they could hurt you in numerous ways. They never allowed themselves to be rushed on offense and they knew how to stick to the game plan. They run the floor well in transition and can shoot it well from the perimeter and often would beat their opponents back down the court on the defensive end, not allowing easy, fast break opportunities.

Hartland (MI)
Standing at 6’4”, 6’1” and 6’, Whitney Sollom '20, Lauren Sollom '22, and Lillee Gustafson '21 makes the Eagles a long team that is very difficult to score over in the halfcourt. Especially when all three of these players are in the game at the same time. This height advantage also enables Hartland to dominate the boards and get multiple second-chance scoring opportunities. With solid point guard play and a couple of reliable shooters also on the roster, this team will not be easy to beat and will be one of the favorites in Class A in 2020.

Southwest Academy (Canada)
Southwest Academy has a young and dynamic backcourt. They always have various scoring options on the court, and most of their key players can play multiple positions. They are balanced with size and quickness and matches up well.  With a guard like Lemyah Hylton '22, a player that is a willing defender, quality passer and can score, this team will make a lot of noise North of the border this upcoming season.

5’11" 2022 SF Alexis Clark Ann Arbor Pioneer HS
After a strong spring, the stock of Clark continues to rise! She had her first official taste of Varsity Basketball, cracking the lineup for Pioneer. Although she played out of position a bit, she made due and excelled while doing so. Her versatility is a significant asset to her game and a reason why D1 coaches have shown interest in her early, as she can play inside and out. While she didn’t always make the basket she did an excellent job sealing her opponents and using her footwork to get good looks at the basket, she rebounded well and got good looks to her teammates out of the post. All in all a good showing from Clark in A2.

6’2" 2021 Post Caprice Augustine Ypsilanti HS
She hasn’t been playing basketball but for about 3 years and she has adapted rather quickly. Scouts have raved about Augustine’s play in travel. At U of M Sunday, she totally dominated the competition on offense. In the two games I watched her play, she displayed a level I hadn’t seen her at yet, and it was a joy to watch. It seemed like every time she got the ball inside, she demanded her space and got easy buckets scoring over and through opponents. She ran the floor well and drew contact to get to the free throw line. If this play continues on in July, I couldn’t imagine her playing the month out without receiving her first offer.

5’10" 2024 PF CoCo Cartwright O3 Elite
Heading into just her 8th grade school year, Cartwright is only going to continue to improve. But she has been on the LBI radar for a while. It was good to see her return to action after being down a bit during the Spring and she hasn’t lost a step. Her length disrupted defenses on both ends as 03 dominated all day long she played with a particular type of energy. She does a great job guarding all over the floor and has the skill set and tools to play all over the floor offensively. Definitely, one to keep an eye on and one of the most effective bigs at her age in Michigan.

5’8" 2022 PG Mya Petticord Ypsilanti Arbor Prep HS
This was my first time watching Petticord since the high school season, and she had a good showing coming off of USA trials in Colorado Springs. She does such a great job getting where she wants with the burst she has attacking the basket, her dribble combinations are so quick she loses defenders before finishing the moves and can get good looks off the separation she often has. She will be exciting to watch during travel in July.

5’7" 2022 PG Lauren DeWolf Ann Arbor Pioneer HS
DeWolf is primed for a strong sophomore campaign as she will return as the lead guard for Pioneer. She brings an energy of the defensive end that you can’t teach. When she pressures up on the ball handler she often stifles them and makes the back up as she keeps coming, Lauren stays alert and keeps her hands in the passing lanes which creates offensive opportunities for her teammates as herself where she’s at her best, in transition. Her handle has improved as well, and she does a good job getting others involved.

5’8" 2021 SG Ella Stemmer Saline HS
A name Mid Major D1 coaches should familiarize themselves with is Ella Stemmer! She is one of the top offensive threats on a Michigan Premier team that was a giant killer during the first months of AAU and she will be the leader for Saline. She torched the nets knocked shots with regularity, she has good body control attacking the basket while absorbing contact and makes the most of her opportunity at the free throw line. Personally, one of my favorite scorers.

6’1" 2022 SF Lauren Sollom Hartland HS
The younger Sollom sister is beginning to make a name for herself as she had a good showing on Sunday, not to take anything away from her big sister Whitney, who led Hartland all day on Sunday, but it must be stated that the future of Hartland is in good hands with their young core and length. Lauren has stretched out a bit and has increased her range to beyond the arc, she can push the ball on the break and was efficient getting inside to score the ball. She will be one of the more intriguing ‘22 prospects moving forward.

5’10" 2022 SG Lemyah Hylton Southwest Academy (ON)
Southwest Academy makes the trip over to Michigan for just about all the events LBI has, we might as well make them an honorary Michigan program. For the first time, I had the opportunity to watch Lemyah Hylton play, and she is a sure fire High Major prospect! A strong hybrid guard with athleticism! The way she rises up over the rim while she attacks the basket it a delight. She is a such a strong slasher and can hit the deep ball, she had a Michigan coach on hand for each game, and it leads me to believe she is high in their radar, not to mention she’s only a Sophomore which made her performance on Sunday even scarier! She rebounds with a purpose and has a body type that will translate on each level she plays at.

6' 2022 SG Kate Clark Carmel HS (IN)
Was the best shooter in the gym. Kate showed her ability to knock down the triple consistently along with her ability to finish with contact for many old fashion threes that helped the sharpshooter leave Ann Arbor with a scholarship offer from the Wolverines. Clark will lead a well-balanced Carmel attack this year if she can stay consistent with her play.